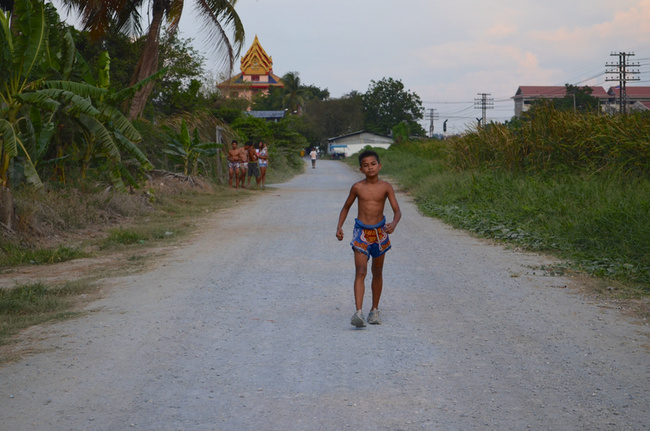 I've never been a runner. Back in college, I tried to get on a running regimen as guided by my obsessive long-distance-runner friend Vanessa. But her tendency to dash ahead to the end of the street and back, all the while claiming our "miserable pace" was hurting her legs, did very little to encourage my love of the activity. So I never really pursued it.

In Thailand's Muay Thai world, however, running is king. You don't question it, you're just expected to do it. The way some trainers talk about it, running is even more essential than pad work or sparring to become a proper fighter.

Most gyms have a standard running route around the neighborhood, and Kiatphontip's route is along a paved road parallel to a canal near the gym in Bangkok's semi-rural outskirts. It's an out-and-back route, with bridges acting as landmarks. You can clock about two miles by running to the first bridge and back. Returning from the second bridge equals three miles, and a round-trip reaching the third bridge will earn you six miles (about 10km). Anyone who wants to fight is expected to run to the third bridge and back nearly every day for preparation.

Despite my unimpressive background in running, I've come to enjoy the morning run before training. Running through the passing scenes of rural Thailand amid the cool air is like a moving meditation. Well kept houses dot the road, the occasional farmer tends fields, chickens wander about, and parents drive their children to school on motorbikes. I trot along at my modest pace and enjoy the tranquil panoramas, subconsciously speeding up if someone from the gym comes into view, or slowing down to pet my various dog-friends along the way. 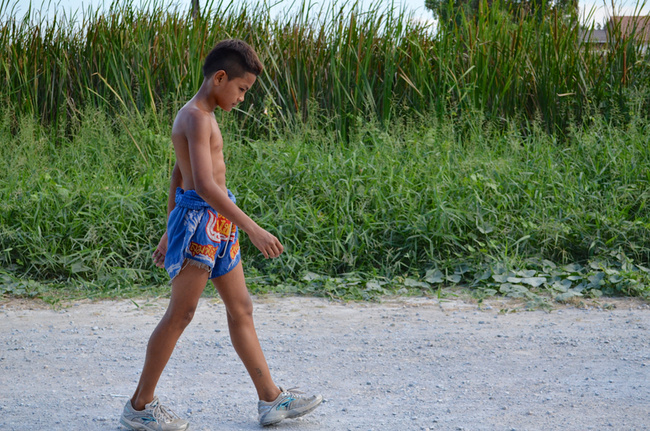 A few weeks ago, I met an American fighter-friend of mine named Tate for lunch in Bangkok, and our conversation quickly turned to the Muay Thai tradition of distance running when I began groaning about how sore my knee was from that morning's long run. "I think it's kind of a misconception that long, slow training is required for endurance sports," Tate said, and cited new studies that suggest short, intense training is more beneficial for fighters.

"Fighters are somewhere in the middle of needing endurance and explosive strength," Tate went on. "Very few exchanges in a fight last more than a few seconds, so getting out on the pavement, burning energy, pounding joints and sapping your finite amount of willpower… It just seems like a destructive waste of training capacity. I'd say sprinting, kicking drills, and box jumps, things of that nature which stress fast twitch muscle fiber, would be far more beneficial to a fighter." 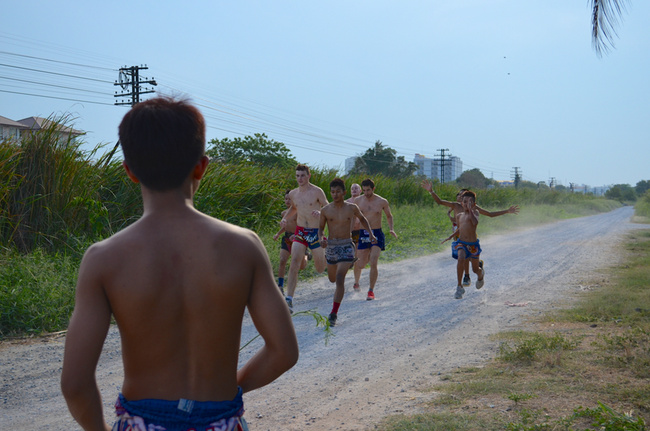 Long-distance running is ingrained in Muay Thai, but sprint-work also factors in. The Kiatphontip boys usually run sprints at the end of afternoon training a few times a week. Joining them is an exercise in acceptance and humility, as I am, without fail, always the last to finish. It never bothers me, though. The way I figure, if some Muay Thai clown like me is ever able to beat these Thai teenagers, who are by all accounts professional athletes, then something must be terribly wrong with these boys.

Occasionally, Thai trainers may go against their natural love of distance running and instead instruct their fighters to focus on sprinting. Sylvie von Duuglas-Ittu, an American fighter currently based in Pattaya, told me about her days training in Chiang Mai. Taking over her training for a few fights, Daeng, one of the trainers at Lanna Gym, ordered her to run longer distances, piling even more miles atop her already high requirements. Once it became apparent these extra miles weren't helping her performance, he modified Sylvie's running schedule to feature sprinting nearly exclusively.

"Now that I'm in Pattaya, though," she said, "I run on my own. My trainers just want to know if I'm doing it, but they don't check on me. It's so easy to see who isn't doing their roadwork. You see people gas out during fights because they didn't run. They have no cardio."

"You mean other foreign fighters?" I asked. There's an old stereotype in Thailand's Muay Thai community that Thais are diligent runners, but foreigners are either lazy, unwilling, or not strong enough to commit to the daily 10km runs. Sylvie, however, was talking specifically about a Thai teenager. He was from Isaan of all places, the region of Thailand known for producing some of the country's most famous boxers.

"We had a really talented kid from Isaan at Lanna," she explained. "He was just incredible, but he'd be gassed by Round 3 because he faked his running. He was experienced enough to fight through it and still won his fights by exploding a couple times at the the right moments. But Jesus, that kid needed to run!"

This Isaan boy, in my experience, is a bit of an outlier. Sure, both foreigners and Thais are known to slack off in their running, but not usually when on an active fight schedule. My main trainer Gong, 26 years old, is diligent about running the standard hour every morning whenever he's fight-training. If there's no fight on the horizon, though, to hell with it. He can't be bothered to run at all.

The younger active fighters at Kiatphontip, however, are expected to run basically every day, and often the full six miles. Some are more devoted than others. Normally, they do run the instructed distance, but I can't count how many times I've spotted them hiding out around the bridge near Mile 2, hoping no trainer will come by on a motorbike to check on them. They poke their heads around the sides of small buildings and eye me suspiciously as I slowly huff-and-puff by, scowling as if to say, "Don't you rat on us."

Sometimes the boys don't even make it that far, or to any point along the actual route. They'll duck into a store around the corner from the gym and catch up with the local shop owner. Maybe they'll spend 10 minutes running a short kilometer or two, but only if they're feeling up to it. 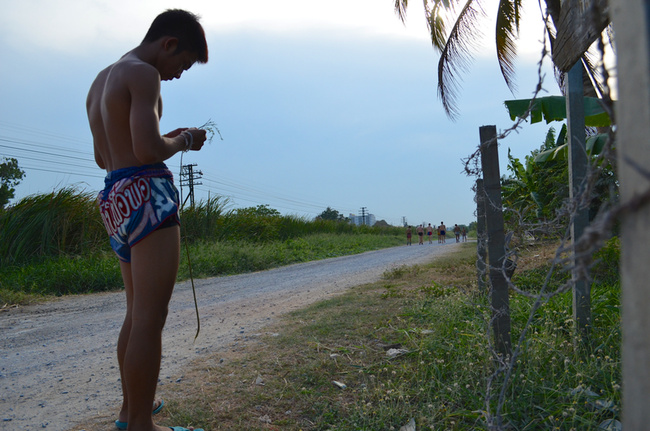 On this particular morning, I leave the gym around 6:30 am and pass through the tiny town en route to the canal road. Seventeen-year-old Teng, one of our resident champions, is blatantly refusing to run this morning, opting instead to read a newspaper in plain view in a shop along the road.

"Thanks, Teng!" I wave him off and cross the bridge to the start of the run.

Gemma, my soft-spoken English fighter-friend, is sitting across the canal in a little pavilion waiting for me, retying her shoes. She too saw Teng in the shop.

"Gem, how often do you think the boys cheat on their run?" I ask as we start jogging down the road.

"They slack off pretty often, but definitely not all the time. The other day I ran all six miles with Jook," she says, referring to a newly arrived Thai teenager training at Kiatphontip for a few weeks in preparation for an important fight. "It was great to run with him. He protected me from all the cars and the stray dogs, and even tried to practice English with me. And I was really happy with myself that I could keep up with him."

Of course she could keep up with him. Gemma used to be a marathoner. I do my best to keep up with her, fully aware that she's charitably slowed down to accommodate me.

"Teng can be kind of lazy," Gemma continues, "but they all take breaks like this sometimes. I think they need it. They hide out until they're supposed to be back at the gym. There was one time when I was finishing a run, and I saw some of them splashing themselves with canal water to make it look like they'd been sweating." 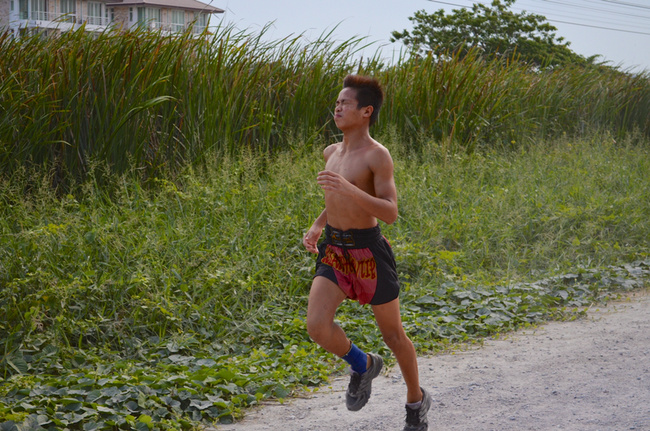 About 15 minutes into our run, Gemma and I are overtaken by Liam, Kiatphontip's head trainer, who approaches from behind on a motorbike. He passes us with barely a notice, eyes set in concentration as he searches for the Thai boys, a switch in hand.

Twenty minutes later, 14-year-old Glai comes thundering toward us, with Trainer Liam trailing him closely on the motorbike, switch at the ready to strike. Gemma and I jump out of their way. Glai gives us no acknowledgement, just concentrates on running home as fast as he can.

I turn and watch Glai in amazement as he runs off at full speed with Liam right behind. Damn, that kid is fast.

"He must have gotten in trouble for taking too long to get back," Gemma says.

"I wonder if Teng got in trouble too."

"Maybe, but Teng's good at hiding. He's great when he actually does run, though. One time, I saw Teng running this route barefoot."

"Don't know. Someone else probably took his shoes that morning. You know how communal everyone's property is at the gym."

I can’t imagine him, our pretty boy champion Teng, running for miles down a rural Thai road, barefoot because someone took his shoes. Now that's dedication. Even if he does cheat sometimes.