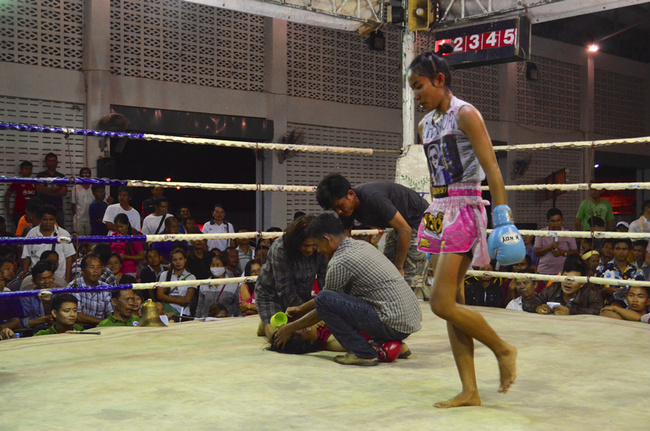 Around midnight, somewhere in Maha Sarakham province in Thailand's eastern region of Isaan, Dr. Tanyarat Kanha watches a fighter take a hard punch and collapse on the ring floor. The doctor rushes into the ring while the referee raises the victor's hand amid cheers from half the gamblers in the audience. Eventually the injured fighter is able to stand without assistance, and the cornermen look relieved.

Dr. Tanyarat and both fighters quietly slip under the lowest ropes and exit the ring. The fighters leave with their respective cornermen, and the doctor returns to her seat next to me behind the commentator's table.

"Is she going to be okay after that KO?" I ask.

"Oh yeah, she'll be fine. That wasn't a real knockout," the doctor whispers with a little grin. "She was tired so she gave up. It's easy to tell fake knockouts from real ones when I'm checking their vitals. Sometimes these fighters can fool the ref, their corner, even the gamblers, but it's pretty hard to fool a doctor. At least she got into the ring, though. I've seen fighters so reluctant to fight that they'll stage a fall on the way into the ring, then start wailing about how they broke their leg or how they're too hurt to fight!"

Dr. Tanyarat began her medical career at age 27 as a nurse. Now, 30 years later, she works full time as  the director of Ban Mueang Dai Hospital in Isaan's Buriram province. For the past 15 years since marrying the owner of local gym Giatbundit, her life has been tied intimately with the Muay Thai community. Tanyarat cooks breakfast and dinner for Giatbundit's fighters and trainers every day before and after work at the hospital. The young fighters at the gym call her mom. She's also one of the most well known ringside doctors in a 100-mile radius. 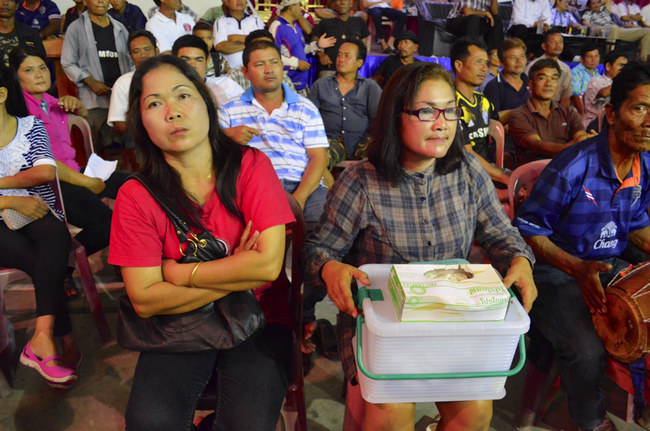 Tonight's fights began a couple hours ago at 8pm, with the majority of the bouts featuring fighters under the age of 18. Now it's nearly 1am and the child fights are mixed in with fights between older teenagers and adults. The doctor sits inconspicuously in the front row behind the commentator's table, hands folded in her lap and box of medical supplies tucked under her chair.

The next match features two boys who appear to be 12 or 13 years old, certainly young but still likely twice the age of the smallest contenders fighting tonight. Like virtually all other fighters in Thailand, the boys enter the ring without shinpads, headgear, or even mouth guards. I ask the doctor if she thinks it's dangerous or unethical for children to fight professionally like this.

"Not really," she says. "Most of these kids don't have enough power to do major damage to each other yet. Actually, I think Muay Thai is a great sport for kids. If I had a son, I'd want him to be a fighter. This area has pretty rampant gang and drug problems, and a lot of the kids come from bad families. If you're a fighter, though, at least you have goals and structure, you learn discipline and respect, and you're part of a gym that often acts like a second family. I'd say it's safer being a fighter than not being a fighter, at least in this area." 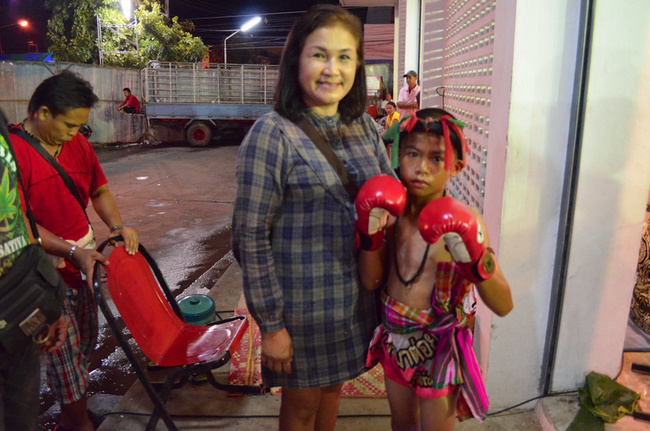 Dr. Tanyarat and Ong Lee, fighting out of Giatbundit Gym, before his fight.

A couple fights later, the big boys are up. A stark contrast from the tiny children and gangly young teens featured earlier, two large, muscular Thai men in the ring are clinching and throwing elbows in a frenzy to cut each other up.

After the fight, the doctor's face lights up with a toothy grin when she sees the victorious fighter approaching her. He has a large red gash above his left eye and another cut above his hairline.

"Stitching people up is my favorite part about being a ringside doctor!" she tells me later. "I don't use anesthesia because it takes too long to inject and requires extra equipment. The fighters around here are tough, though. They're used to it."

Her fighter-patient thanks her gruffly and wanders away after treatment. "Those were big men in that match. That's why he had so many cuts," she explains. "I rarely see injuries on anyone younger than 15, mostly because they're not big enough to generate enough power to cut each other. With the larger teenagers and the adults, though, I see cuts all the time, but I never worry about it. Cuts are no big deal.

"I don't like knockouts, though. They can be scary because you don't know offhand how severe it is. If someone gets knocked out and then regains consciousness within two minutes, everything is probably fine. But you have to look at more than that. You have to check their pulse, watch their breathing, observe their eyes and how responsive they are in general. If after five minutes their heart rate is still over 120 beats per minute, then something might be wrong. It shouldn't be more than 80 or 90 bpm at that point, for a healthy fighter. Again, it's hard to tell just from one indication like heart rate. You have to look at all the signs collectively.

"Once, I witnessed a really rough knockout with this one kid. His pulse was weak and he wouldn't wake up. I lifted his eyelids to shine my flashlight into his eyes but he wasn't responding properly to the light or blinking normally. We took him to the hospital immediately for further treatment. In the end, he was fine. That was the first time in my life I'd ever seen someone get knocked out so badly in a fight. I'd say less than one percent of fights ever results in an injury so bad that someone has to be taken to the hospital." 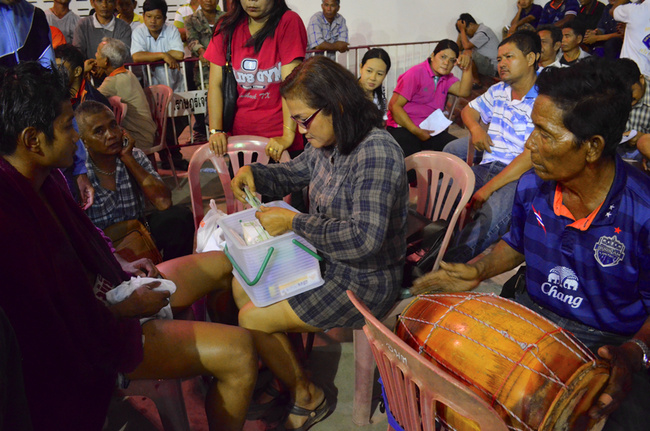 Dr. Tanyarat treats a fighter for cuts sustained from elbows while a fight musician looks on.

Tanyarat has been one of the most prominent ringside doctors for the last decade in this area. Various promoters call her every week and request her medical services for fight venues in settings as varied as government buildings, temple fairs, and rice fields. "I like being a countryside doctor because I can do all the work myself," she says. "If someone needs stitches, I'm the one who does it. In a big Bangkok stadium, on the other hand, often it's the nurse who does the actual work, and the doctor just checks it and signs off on it.

"The whole culture of ringside medical treatment is pretty different between Bangkok and the countryside. In Bangkok, the fighters are checked before the fight, and then checked again after the fight, just as a matter of course. Here in the countryside, some promotions don't even have a ringside doctor. It's illegal not to have one, but the law is hard to enforce. If a fighter gets hurt and there's no doctor, sometimes the promoter will give the family some money to visit a hospital, but quite often the fighters and their families are on their own. In Bangkok, they check the fighters beforehand, and don't allow them to fight if they're not fit enough. Here, as long as there's money to be made and people gambling on the fight, anything goes." 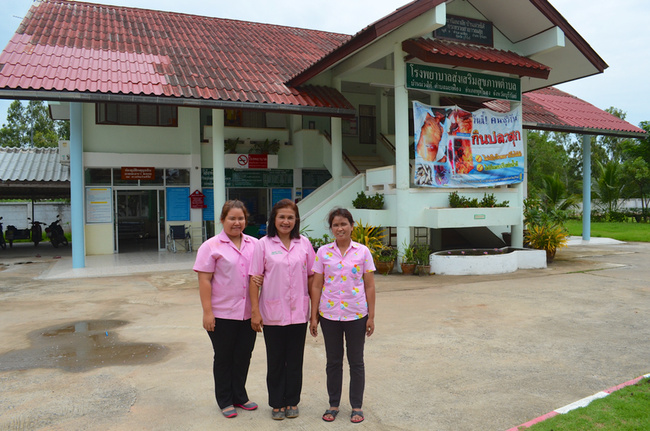 Concern over the subpar medical treatment injured fighters were receiving was Tanyarat's main reason for taking up this profession in the first place. "When I first started going to fights, I would see older doctors stitching patients up in unsanitary conditions, like using unclean equipment or not using gloves. And if a doctor wasn't present, sometimes even the promoters or judges or referees would try to treat the fighters themselves. It was awful to watch, and I didn't like thinking about all the infections and problems that could result, especially when the fighters were just kids. That's why I decided to start helping out."

The doctor is such a well known face in the local Muay Thai community that many regular gamblers also come to her for medical services at fights. "I always bring extra supplies with me now because gamblers will approach me between fights and ask me for a painkiller or tell me about a symptom they have. I think most of them are drunk at the time." 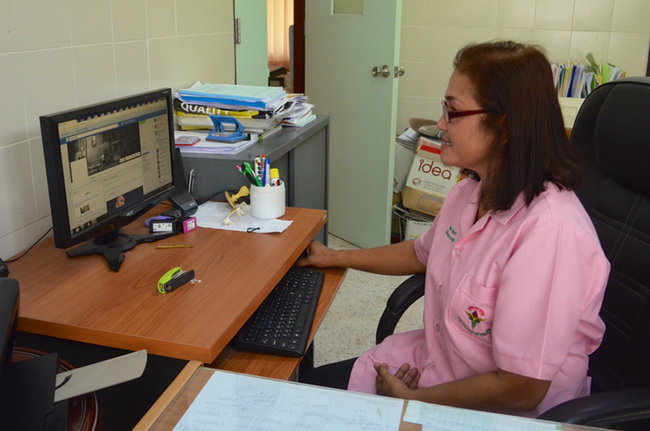 Dr. Tanyarat peruses Fightland's facebook page during her lunch break at the hospital.

Tanyarat usually earns 1,000 baht (US $31) per event. She maintains a relationship with a number of promoters, sometimes working ringside multiple nights a week, especially during the high season of Songkran, Thai New Year. "I make it to about four fight nights a month," she estimates, "but during Songkran, I'm attending fights constantly, sometimes two separate promotions a day. It's hard to get more than two hours of sleep a night during high season. Some of these fights go all night. I used to wonder why they didn't call more doctors to help out, but then one of the promoters told me he liked working with me because, unlike some of the male doctors around here, I don't gamble."

Surprised, I ask if it isn't illegal, or at least unethical, for ringside doctors to gamble on fights.

"Of course it's illegal!" she laughs. "But who is going to stop them? On top of that, it's technically illegal not to have doctors at fights but so many promoters try to save money by cutting out the cost of the doctor. I don't get paid much for this, but even then I still get stiffed a lot. Even at big events, if the promoters decide not to hire a doctor, they usually get away with it. The police just look the other way."

Despite all the hassles with promoters and all the fight nights that last until 4am, Tanyarat still says she loves being a ringside doctor. "I love being able to help people, and I love meeting people through the Muay Thai community. I have to admit, though, that sometimes I wish I had been a fighter too. It would have been pretty amazing to be a fighter when I was a young woman, especially during medical school. I could cut up a girl's face with my elbow, and then stitch her up afterwards myself!"

Special thanks to Boom Watthanaya for help with interpretation.

An American in Thailand: The Surrogate Family Bonds of Muay Thai