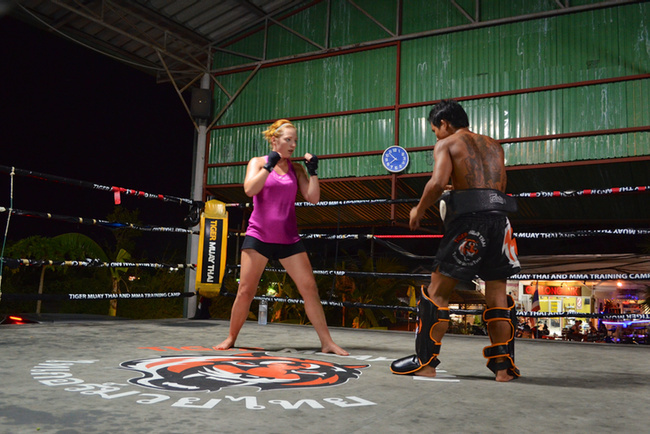 Funny thing about this place called Tiger Muay Thai—a startling majority of the foreigner Muay Thai circuit hates it. It's a commercial, money-hungry fake gym, they say, built only for stupid Muay Thai tourists who don't know any better. Of course, very few of these naysayers have ever visited Tiger themselves.

Then there are the hardcore Tiger fans, the testimonials of whom are all over the internet. Russians and North Americans flock here, as do the MMA crowd, so-called fat-campers, and "fight tourists" who want a vacation comprised partially of martial arts but mostly of partying on the island of Phuket. Tiger Muay Thai is at once vilified and worshipped, easily the most divisive gym in Thailand.

And that's exactly why I decide to leave Bangkok and fly to Phuket, determined to train at Tiger for at least a week. The ladies in the reception office greet me graciously when I arrive on a Sunday. They'll prove to be tremendously accommodating and helpful throughout my stay. One of them even gives me a personal tour of the facilities upon check-in. Yeah, a tour—what the hell Muay Thai gym is so large that you need an actual tour? That's because it's not just a Muay Thai gym. It's more like a fitness and fight resort that happens to have Muay Thai available.

"There aren't too many people here right now," my guide tells me as we're walking from the beginner's area to the fighters section, "only about 100. It's getting to be low season soon." My home gym in Bangkok is packed whenever it has a tenth of the people here now. Then again, my home gym has only one mat area and one ring. Tiger has something like six rings and an MMA cage. And an indoor MMA mats area. And a weight room. And a restaurant. And an office, connected to a fight-gear store.

After the tour, my helpful hostess hands me a schedule of classes. "You bought the full package so you can attend any of these," she says. I scan the schedule and see four levels of Muay Thai classes offered every day, twice a day, as well as a full buffet of Brazilian Jiu Jitsu, yoga, various fitness classes, and ancient fighting arts of Muay Boran and Krabi-Krabong.

Clearly I'm at Muay Thai summer camp. I never went to sleep-away camps when I was a kid so I'm making up for it now as a 30-year-old woman in a tourist-saturated part of Thailand, as so many others around me at Tiger do the same. 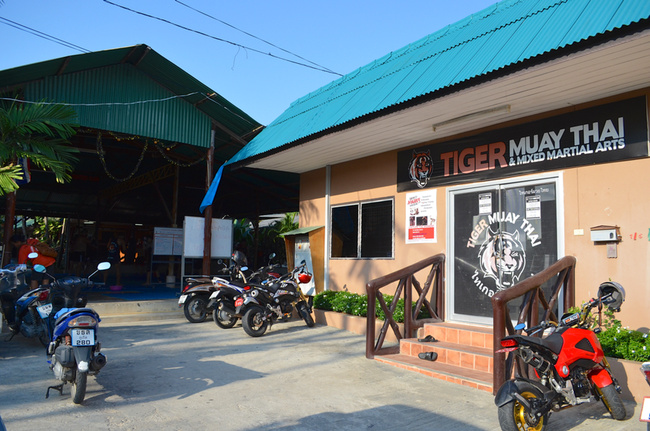 On Monday morning I wake up in my fan-equipped dorm room, Tiger's most economical housing option. First on my list of classes today is yoga, something I haven't done in years. Our yoga teacher is a stereotypically calm, tranquil man appearing to be in his 30s. I enjoy the stretching aspects of the class, though the bastard mosquitoes make it difficult to hold a pose, as does my general yogic inadequacy. The slim woman in front of me obviously knows what she's doing—she has the trendy yoga clothing to prove it. About two-thirds through the class, a larger gentleman behind me just gives up and rolls into a ball. I like his style.

Yoga has left me feeling relaxed and rejuvenated. Now it's time to get flustered and frustrated in my first Tiger Muay Thai class. There are four levels on offer at this gym: beginner, intermediate, advanced, and fighters. There's no placement exam upon arrival, so I ask one of the office employees how to pick the right level.

"Are you a professional fighter?" she asks, "or is this your first time doing Muay Thai?"

"I think I'll check out advanced instead. Let's see if my year in Bangkok has prepared me to hang with Tiger's big kids." 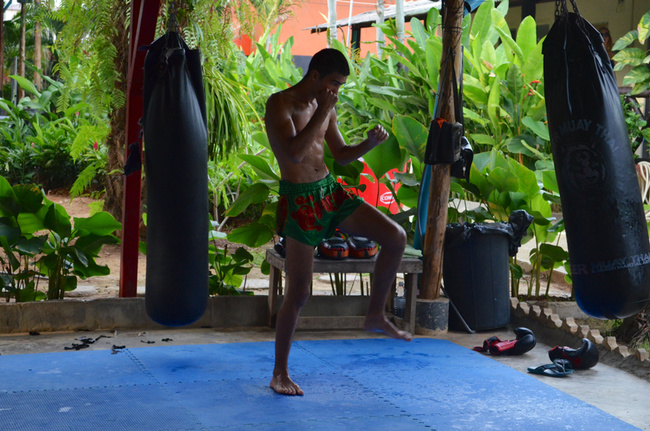 There's only one other woman in the advanced class. She looks like a fighter -- short and broad-shouldered with a ponytail of long brunette hair and heavy bangs. The rest of the class is comprised of a dozen tough-looking white dudes, mostly Russian.

We trot in a circle around the mats for 20 minutes and are then put into pairs for boxing sparring. I'm paired with the stout woman, of course. We both don our 8-ounce gloves and her immediate fervor makes it clear she's taking this whole thing very seriously. I'm blocking as best I can, trying to throw some counter attacks, silently rejoicing whenever I land a hit on her face. She's clobbering me about 80% of the time, but I don't sweat it much. If there's anything I learned in a year in Bangkok, it's how to take hits.

The whistle is blown after 10 minutes. We have a little chat in between rounds and I learn she's Gritte from Belgium, here training for her first Thailand fight next week. We jump into another 10-minute sparring round and she goes far harder than I do. Then again, maybe I'm just imagining how one-sided it is. I've heard studies on the psychology of sparring, which describe the tendency to perceive your opponent's strikes as much harder than your own. I try to convince myself she's not dominating me as much as I think she is, that I'm actually holding my own, but my fears are confirmed when a Thai trainer comes over, interrupts our sparring, and tells her to tone it down a bit.

The whistle sounds again, ending the second round. Great, got through that little beating. Twenty minutes sparring down. Maybe it's time for pads or technique now.

Then I hear a Thai trainer yell, "Break! Water! Three more round!"

"What?" I turn to Gritte, "Did he just say three more rounds?"

"Yeah, we normally do 5 rounds of sparring or clinching."

"That's, like, an hour. You do that every session?"

"Only with other foreigners?"

"They actually expect us to spar for an hour?" I ask, only half joking.

"Well," she smiles slightly, "you are in the advanced class."

Oh yeah. Well that was obviously a bad choice on my part.

We get back into it, three more rounds of 10 minutes each, which basically amounts to 30 minutes of me getting beaten up by a kindly Belgian woman. I steal occasional glances at the Russians. Some of them are just going crazy with each other. So stereotypical of foreigners sparring—all aggression and brawl, little technique or control. Everyone needs to kick back and have some beers.

The trainers leave us to our own devices. Very rarely does a trainer get involved, either to bark orders or clarify a technique. I get a vague feeling the Tiger trainers monitoring the sparring are entertained by how much some of us suck, and by "some of us," I mean "me." At least no one tells me to get my ass back to intermediate level, which is definitely a compliment for my blocking ability.

Do we actually work with the trainers here? I'm starting to miss the sparring sessions at my Bangkok home gym, where the high population of Thai fighters allows a foreigner like me the chance to spar with Thais on a daily basis.

At the end of sparring, the trainers call us over for pads. I'm paired up with Doi, a short, hefty young trainer with an adorable smile featuring multiple teeth gaps, wider than highways. He's engaging and energetic, with a challenging speed to his pad holding, but the pad session feels like it's over before it's begun. It seems the standard at Tiger for pad work is three rounds of three minutes each. That's not even 10 minutes on pads, less than half of an average pad work session in my Bangkok experience. The rest of training consists of independent bag work and some shadowboxing. 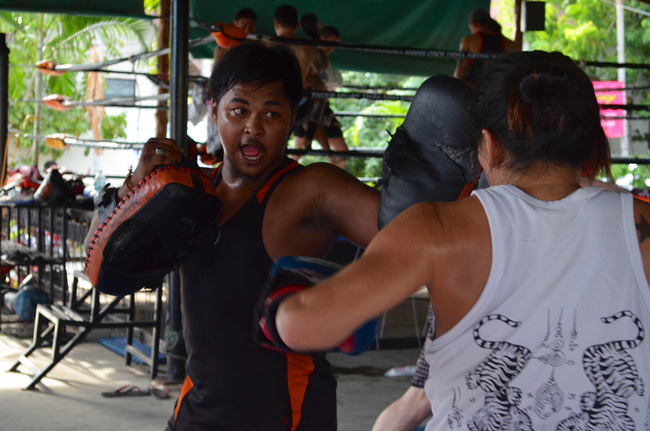 The morning session winds up and I start doing sit-ups on my own. A Thai trainer in his 30s with a noticeably droopy eyelid casually takes a seat on the mats next to me. He introduces himself as Robert, which to me is an odd name for a local Thai to have. Once it's determined I can speak conversational Thai, we're joined by a couple other younger trainers, baby-faced Tuk and darling unibrowed Pao.

"You speak Thai… You have a Thai boyfriend, huh?" Tuk surmises, after I tell them I've been training Muay Thai in Bangkok for a year now.

Tuk's right on. He must have seen my "type" before—single foreign women who train Muay Thai and speak Thai, mostly because they've learned it from dating a Thai.

"Samsamut Kiatchonkao?!" Pao, the youngest of the bunch, looks incredulous. "I know him! We used to train together at Chuwatthana! You're his girlfriend?! I haven't seen him in years!" Pao fumbles with his smart phone and pulls up a photo of himself in a group shot at Chuwatthana Gym in Bangkok. Judging by how adolescent he looks, I'm guessing this photo is at least five years old. Sure enough, standing unassumingly in the back row, is a slightly younger version of Gong.

Pao barrages me with questions about Gong—Where does he live? Is he still fighting? How long have you two been together? Will you marry him?

Robert's question is much more to the point: "So, is Gong's bedroom technique as good as his Muay Thai?"

I call him cheeky in Thai and turn away so as to hide my laughter. "Ya rokjit," I chastise him. Don't be perverted. It's my first day at Tiger, too early to admit my appreciation for the adolescent sexual humor so common in a Muay Thai gym.

After Tuk and Robert drift off, Pao stays to chat with me a bit longer in rapid, natural Thai. He talks to me like a normal person, like a potential new friend. Maybe it's partially because I can speak conversational Thai, but I'd wager it's mostly because I have his old friend Gong as my in.

I go back to my dorm room around noon. It's too hot to sleep on the bed, even with a fan, so I pass out straight on the tile floor for a few hours. Advanced class was fun and all, but I don't really feel like getting beaten up this afternoon. Let's see what the Tiger beginners can do.