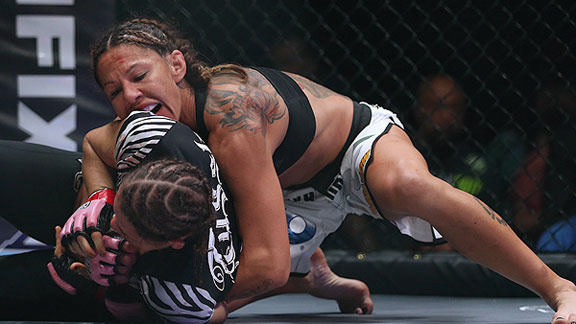 I pulled up the ottoman from a chair in Tiffany’s room at the Aladdin Hotel in downtown Kansas City last Thursday, parked myself against the wall with the morning paper, and watched as she combed out Lauren Taylor’s long hair and began braiding it back away from her face in preparation for her debut fight at Invicta Fighting Championship 5. Tiffany is a friend of President Shannon Knapp and matchmaker Janet Martin from way back, and they’d flown her into Kansas City so that the girls wouldn’t have to worry about figuring out a place to get their hair done in a strange city.

She’s done this service for the fighters at each Invicta so far, and she tells me how funny it is to her that some of the toughest girls in the promotion, the ones who’ll take the hardest punches in a brawl without flinching, have such tender heads that they cringe and whine when she’s working them over. Lauren, my old friend from back in Alaska, didn’t flinch. She’s got a pain tolerance like I’ve never encountered before. I know because I once watched her looking almost bored as a Belizean tattoo “artist” named Beto scrawled a thick black outline into the bottom of her big toe. Meanwhile, when I sat for the same procedure right after her, I was sweating, sucking in breath between my hard-clenched teeth, and at times involuntarily attempting to claw my way out of the chair. And I can hang for tattoos.

A few hours later, we went down to the fighters’ meeting, where referee Big John McCarthy explained the rules, and Janet Martin made it clear that bitchy behavior and poor sportsmanship would not be tolerated by Invicta. I half listened while my eyes wandered around the room. Tito Ortiz sat with Cristiane “Cyborg” Santos a few rows behind me.  Pat Barry was a few seats to my right with his girlfriend “Thug” Rose Namajunas. Several of the top women’s 135 pounders were in the room, including the two who first opened my eyes to what female fighters were really capable of, Sarah Kaufman and Alexis Davis. Their fight on the same Strikeforce card as Ronda Rousey and Meisha Tate back in 2011 is still one of the most incredible brawls I have ever seen, male or female. Prior to that, even I held onto a little of the reservation that I hear so many guys express when the topic of women fighting comes up. They look at me apologetically, expecting to be berated, and say, “It’s just hard for me to think I’d enjoy watching women hurt each other.” I had secretly agreed at one time, but that fight changed my mind.

Invicta’s cage girls came onto the stage at the front of the room with Shannon and Janet, and weigh-ins started. I’d been waiting for this moment mainly to see Cyborg Santos. This was to be her first fight in over a year after her suspension for using PED’s, and everyone quieted down as she came up the steps toward the scale.

Recently, Alistair Overeem had made a similar comeback to MMA after his testosterone levels were found to be through the roof. Comparing photos of his weigh-ins before he was suspended and after made it seem very likely that the juice had had a major effect on his physique and his performance. In one, he looks like a superhero (or a science experiment) and in the other, he looks more like your average enormous heavyweight. And, as Fightland’s Fight Doctor broke it down for us recently, during Overeem’s fight with Antonio “Bigfoot” Silva, the gas in his tank was substantially depleted without those extra chemicals in his system. Naturally, I was wondering if Cyborg would be the same case, if her explosiveness, strength, power, aggression, and insanely muscular build had been a result of PEDs and nothing else. But when she came across the stage, stripped down to her skivvies, and stepped on the scale, flexing her arms and looking shy of all things, she looked no less terrifying than I remembered her.

I looked at Santos’ opponent Fiona Muxlow standing across from her and felt a sense of dread. She’d stepped up last minute to fight Cristiane after Ediane Gomes was injured, and the kind of balls it takes to do such a thing, without a plexiglass shield or loaded firearm, should be rewarded in some way. Instead, the assembled crowd knew it would end only in punishment.

The next night, our suspicions were confirmed. The only thing that surprised us all about the fight was how long it lasted. Fiona went down like a sack of bones on the very first punch Cyborg threw. I thought it was over right there, but Fiona kept getting up. Eating arguably the hardest punches thrown by any woman on the planet, over and over, she got back up and attempted to take Cyborg down, whose attacks in response became more and more brutal. Cheers in the crowd started turning to gasps and low moans of concern. People were covering their faces or saying aloud, “Come on Big John, please stop this fight,” all around me. At just shy of four minutes, the massacre was stopped, and we breathed a collective sigh of relief. I’ve never seen a fight that was such an ordeal for an audience to go through. And the obvious conclusion here is that, enhancing substances or no, Cristiane is easily the scariest woman alive. A fact made even more frightening because of how kind and gracious she was when swarmed by a barrage of fans after the fights, all wanting photos and autographs. She smiled shyly and bowed in thanks to each person who praised her. That settled it in my mind: The woman must be possessed by the powers of hell whenever there is a cage closed around her, but only then.

The event that had brought me all the way to Kansas City, though, was Lauren Taylor’s debut with Invicta against Kaitlin Young. Young had originally been slated to fight Amanda Nunes, but Amanda had been injured three weeks before the fight and Lauren had agreed to step in. This made for two fights back to back that Lauren had taken on short notice and for which she’d been given only three weeks to prepare. Kaitlin has won Fight of the Night for Invicta before and is a fan favorite because her fights are always so exciting. She’s an experienced striker with a long Muay Thai background, and Lauren was understandably terrified of her. Kaitlin’s fought most of the top 135 fighters on the roster, she is taller, and she’s vastly more experienced. The predictions for the fight by and large fell to Kaitlin.

The stakes were high for both Kaitlin and Lauren. Kaitlin had lost her last few fights and was looking to prove that she could still hang with the new talent in the 135-pound division. Lauren needed to prove that her undefeated record wasn’t just the result of having spent most of her career fighting in the Alaskan minor leagues.

The first three minutes of the fight almost killed me. Kaitlin hit Lauren with some good shots, took her to the ground, and almost secured a body triangle and then a rear naked choke. But then the fight started to turn. Kaitlin had come out strong and aggressive, but she’d been unable to finish, and pretty soon she started running out of gas. Lauren gained top position and maintained it through the rest of the round. The second round saw Lauren finding her stride standing up and landing some hard shots of her own before taking Kaitlin to the ground and grappling actively until the last 10 seconds, when Lauren got Kaitlin into a very tight rear naked choke of her own. Had the round gone on longer, that would have finished it. But it didn’t, and Kaitlin fought the rest of the fight through without giving up, though she couldn’t keep up with Lauren’s pace.

Though she won, Lauren couldn't hide her disappointment after the fight. The first thing she said to me as she came out of the cage was “I’m bummed I didn’t finish her.”

Check out the related stories: