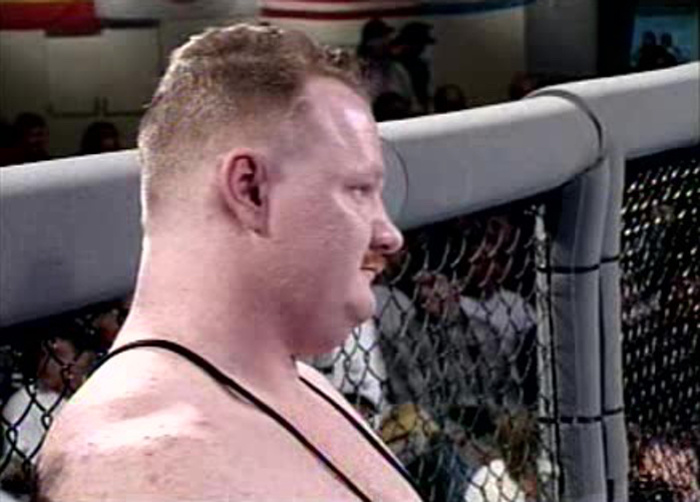 It was April 7, 1995, and the first tournament match of UFC 5 was about to start inside the Independence Arena in Charlotte, North Carolina. As Jon Hess walked to the Octagon, his crewneck came off and his gut cascaded from a doughiness that started at his chin. "[Hess] claims he’s in tremendous shape," said UFC announcer Jeff Blatnick even as he saw Hess's jiggling midsection. "You may not believe it by the looks of him, but that is what his credentials state."

Blatnick also said that the 6'7", 295-pound Hess was a master of his own martial art, Scientific Aggressive Fighting Technology of America, or SAFTA. Meanwhile, Andy Anderson—the 238-pound, light-bulb-nosed ginger who looked like a King of the Hill character waiting in the Octagon—purportedly held a black belt in Tae Kwon Do, rankings in other strip-mall martial arts, and an 86-0 record in "bareknuckle challenge matches." (He was also the proprietor of a so-called nude steakhouse in Texas and supplied ring girls for the UFC.) Anderson's nipples fell out of a tank top that said "Kick Ass" on the back, while Hess wore an expression of malevolence reserved for an animal-torturing seventh-grader.

Why revisit the time 21 years ago for what might have been the most objectively sloppy fight ever shown on pay-per-view? Because right now is a great time to be an MMA spectator with a long summer of consequential fights like Cruz-Faber III and Cormier-Jones II on the horizon, and because it couldn't have happened without finding the sport's nadir of Jon Hess versus Andy Anderson. It was a fight of unlikely significance: it embodied all the fouls-and-beer-gut stereotypes that no-holds-barred fighting had to break away from to become the mixed martial arts we watch today.

From the moment ring announcer Ron Jeremy—his real name—finished the introductions, Hess versus Anderson revealed its true nature of brutality and slapstick. Words are a poor substitute for watching what happened.

To see Hess's techniques, SAFTA apparently centers on elbows to the spine, hilarious kicking, and rudeness: he was always pointing his fingers in people's faces and eye sockets. Anderson, meanwhile, whiffed on takedowns and a one-hand strangle and seemed about to get snuffed out until Hess tumbled over and Anderson—spry by comparison—scrambled up. Hess fished for fistfuls of Anderson's hair from inside a full guard that he didn’t know how to use, and while Anderson eventually passed to side control, the end came soon enough: Hess clambered to his feet and threw more sloppy windmill punches, dropped Anderson, and started in with a brief battery of soccer kicks. A baby-faced John McCarthy stopped the fight after one minute and 23 seconds of pure filth.

Hess didn't continue on with the UFC 5 tournament because of injuries and was reportedly fined $2,000 for breaking the early UFC's few uncomplicated, unrestrictive regulations. A decade after the fight, speaking with Sherdog, he still had no remorse. "I would not agree that this fight was a dirty fight as the UFC billed itself as no rules," Hess said. "If there are no rules then how can you break them?"

Anderson, however, might see things differently. Literally. "Instead of hitting, he scratched my eyes while we were standing," Anderson said of Hess in No Holds Barred: The Complete History of Mixed Martial Arts in America by author Clyde Gentry. "Then he continued to scratch and hit me. I finally got him on the ground and got on top of him, and he shoved one thumb into my eye so that I could barely see. Then he bit a chunk out of my hand, grabbed the back of my head, and shoved a thumb in my eye, popping it out of socket. I lost 20 percent of the peripheral vision in my right eye."

Anderson, who never fought again, came back onto society's radar in 2010 after he allegedly joined up with the Aryan Brotherhood, was convicted on charges of conspiracy to distribute methamphetamine and money laundering, and was sentenced to 30 years in prison. As for Hess, he fought once more in October 1996 at Superbrawl 2 in Hawaii. Unfortunately for him, his debuting opponent was a 19-year-old Brazilian fighter billed as Victor Gracie, who we now know was Vitor Belfort. "He wanted nut punches allowed, all these things," Belfort recalled of Hess. "I put my hands over my nuts and said, 'I want to be a dad someday!'" A more SAFTA-friendly rule set became a moot point: Belfort used Hess's head as a speed bag and stopped him in 12 seconds.

Jon Hess versus Andy Anderson remains awesome in the way that America's Funniest Videos is awesome. It's a foul-laden, ugly, lawless, talentless parody of an MMA fight, perpetrated by two guys who were living caricatures of the rolled-off-a-barstool cliché. There was nothing sportive about their flailing across a 60-pound weight differential, nothing worth examining beneath the farce of it all. It's fight junk food. It's something you can't keep consuming without getting sick of it.

And it was the logical outcome of parameters that were too wide open. Boasting of no weight classes, no time limits, and functionally no rules was fine for the Gracies' efforts at marketing the all-purpose nature of their family's martial art, but it's not how a sport is made. Without tamping down the outlaw undertones and providing any semblance of the margins that distinguish organized competition from random chaos, it was an invitation for thugs and masters of their own improvised martial arts to find notoriety in the sideshow while they waited for Royce Gracie to choke the toughest of them unconscious.

When the Gracie clan stopped backing the UFC after Royce's yawn-inducing draw against Ken Shamrock later that night at UFC 5, the reigns loosened. Without any obligation to be the marketing arm for Brazilian jiu-jitsu, there was room to see what more could happen. Slowly and through many years, the sport found its familiar structure. With the margins in place, fighters could tailor their combative specialties to a scheme of five-minute rounds, three judges with scorecards, and the Unified Rules. With time, they raised the stakes and cross-trained, evolving from ground-and-pounders to sprawl-and-brawlers to fully realized fighters. Now, athletes with abs instead of Hess-like girth are a fixed part of the scenery. Luke Rockhold, the son of a pro basketball player and brother of a pro surfer, headlines UFC 199 this weekend. In July, Jon Jones, the brother of two NFL standouts, does the same at UFC 200.

We tend to forget that today's MMA, at least in its competitive aspect, represents the edge of forward progress. That's why it's so irritating to hear occasional clamors for a return to the old days, to alternative realities where weight classes and rounds disappear, as though it was a better and purer time when guys with sky-high BMIs and track pants threw hand-breaking haymakers. But for those who fear tomorrow, comfort lies in the dim familiarity of yesterday. Let Hess versus Anderson be a reminder to the nostalgists who would want to make MMA great again: yesterday sucked.