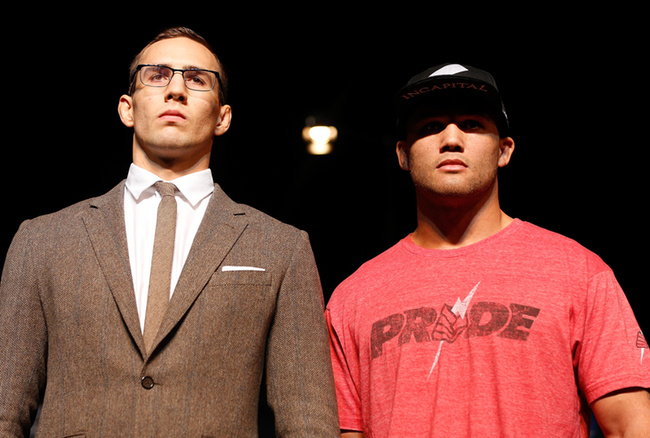 Just days ago, the UFC announced that it would be adding a few stops to its much-hyped UFC 189 World Tour. One of those stops was Vancouver, the city that I, an eager but somewhat unprepared Fightland writer, currently call home. So once the news had broken, I tracked down a press-pass and, armed with only a beat-up iPhone, made sure to be there.

These were my experiences over the course of the hour-long scrum with UFC welterweight champion Robbie Lawler and BC-born challenger Rory MacDonald.

The media-only event went down in the Concerto Room of Vancouver’s Westin Grand Hotel, a modest event space which, at just 448 square feet, is substantially smaller than the UFC’s 750-square foot-octagon. While Lawler and MacDonald aren’t really the type to engage in Jones-Cormier-style press conference brawls, it seemed like fairly close quarters for two men who, in a few short months, will be paid hundreds of thousands of dollars to pummel each other into apple sauce for a gold belt. Then again, it’s not like this was the first time they’d met.

Lawler and MacDonald have shared the Octagon before. They served as part of UFC 167’s main card back in November of 2013. That night, Lawler came out on top, winning by split decision. It was fairly clear-cut win for the American Top Team representative, but MacDonald didn’t make it easy for him. And of course, the Canadian plans to make it even tougher this time around. With the belt on the line, he told me he’s expecting an entirely different result.

“I’m refocused,” he said. “I’ve been working really hard on a few new techniques, and I think it’ll deliver in this performance.” 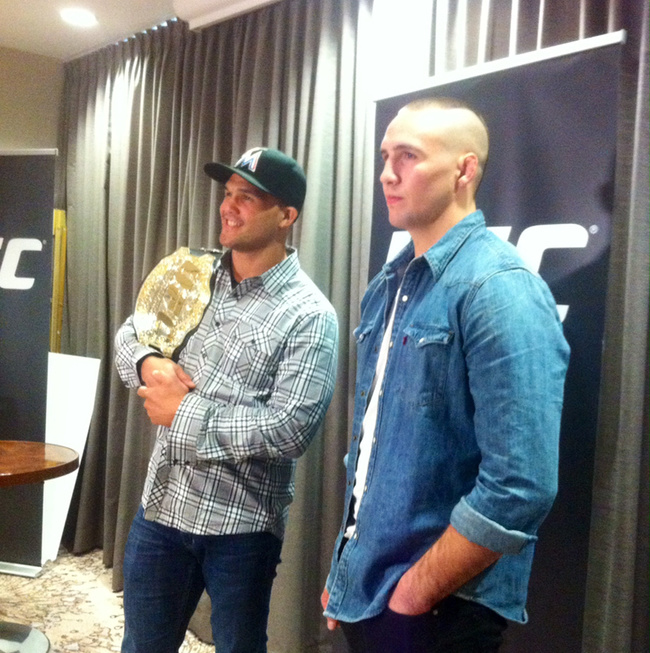 Now, one might assume that, because Lawler is the champion, and because he’s already defeated MacDonald once, that he would be the betting favorite leading up this bout. This is not the case. The improvements MacDonald has made since their first bout have been so drastic that he instead has been dubbed the fighting favorite. Such things do not concern the notoriously mellow Lawler, however.

“I don’t really keep up on that stuff. People tell me about it, but it doesn’t bother me,” he said of his role as the underdog. “It is what it is. That’s how I opened last time we fought, but that’s not what it’s about. It’s about me getting better as a fighter, about me improving, and about me focusing on the things I can control, which is training hard and training smart.”

According to Lawler, training hard is just what he’s been doing, citing no real changes in his life since becoming the world’s top welterweight.

“It feels good [to be the champion] but I’m still the same guy. I’m still grinding away, still trying to get better and that’s what it all comes down to. I’ve achieved a lot but I’m not resting on that, I just want to be a better fighter.”

A few minutes of conversation with the champ reaffirm that he really is one of the most Zen guys out there. His focus is solely on the next man in line and what he can do to stop that man from taking his belt. He isn’t concerned with anyone beyond Rory MacDonald.  Even when I asked what he thought about a trilogy fight with Johny Hendricks—which, given the razor-thin nature of their first two bouts, would give him the chance to silence some of critics—he didn’t blink.

“You’ll never silence everyone in the world. I’m just happy with where I am today, and I’m trying to become a better fighter and a better person,” he said. Not even the possibility of a scrap with a returning Georges St. Pierre— a fight that would have tremendous legacy implications— could shift the champ’s focus.

“Obviously that would be a big fight. He’s a heck of an opponent, he’s a heck of a champion, but I’m concentrating on Rory right now. I focus on myself, and my coaches focus on him, and I show up to work and train hard,” The champ said. “It’s not really something I’ve thought about.” 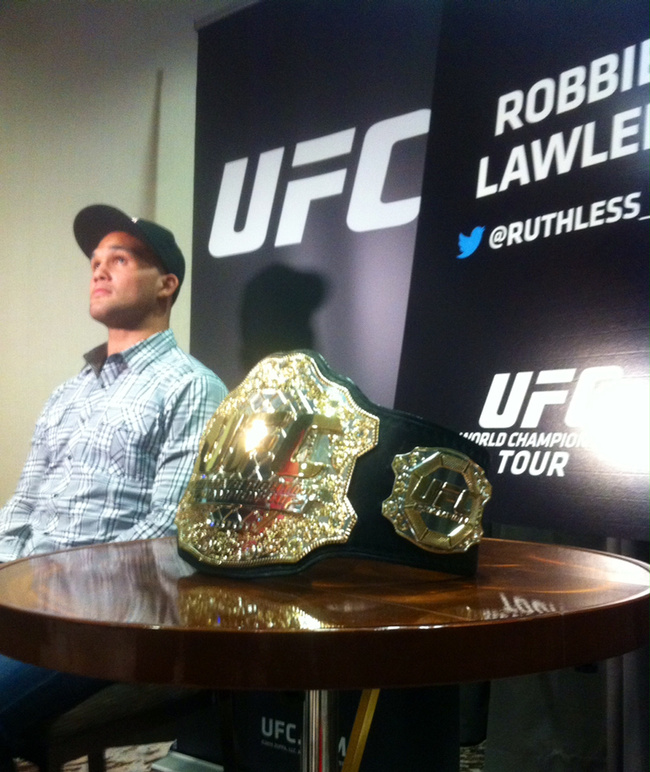 Yes, Lawler is doing this because he loves it, which relegates big-name, legacy fights to the backburner.

MacDonald on the other hand, who was positioned across the tiny room, occasionally glancing over at Lawler and his glimmering belt, was less reluctant to look beyond this title fight. While he reassured that his focus is entirely on Lawler, he did admit that a rematch with one old foe in particular is something he’s definitely interested in somewhere down the line.

“I can definitely see myself fighting Carlos [Condit] again at some point,” he said.

Whatever the future holds though, the TriStar stalwart says he will continue to train his heart out, just like he always has. It’s his work ethic, after all, that has led him to a title shot at just 25 years old.

“I sacrificed a lot of my young years to get where I am today. I put in the work. This didn’t fall out of the sky like a lot of people think,” he said. “I’ve got one of the hardest fights of my life coming up, and I’m just going to focus on that. Maybe after I win [the belt] I’ll have a ‘holy shit’ moment, but right now I’m just hungry and focused.”

After just shy of an hour with the two fighters, one thing was abundantly clear—and really, it’s something we all already know. In Lawler and MacDonald, we have two fighters who do this because they love it, two fighters who speak sparingly, and prefer to express themselves when they’re surrounded by chain link.

Yet for all their focus, both fighters still know how to laugh. When the event had wrapped up and everyone filed out of room, I sheepishly asked my fellow Canadian if he’d take a picture with me. He graciously accepted. A few minutes later, I found Lawler in a narrow hall outside the room. I made the same request of him and he also generously obliged. As fate would have it, however, the champ and I suddenly found ourselves alone in that hallway with just one other person—the challenger.  MacDonald squeezed passed us with a smirk.

“Awkward...” he said, with a chuckle. Lawler laughed back.

Post-photo, MacDonald and I walked out into the lobby together. Doing my best not to seem star struck, I tried to make small talk. The best I could come up with—god dammit—was: “so, who has hit you the hardest?”

MacDonald gestured back to Lawler, who was checking his phone. “Him, definitely,” he said without hesitating.

With that, I thanked him for his time and left the Westin, sure of just one thing. When Robbie Lawler and Rory MacDonald meet again in the co-main event of UFC 189, don’t blink. The two fighters exemplify calm under pressure, but their crosshairs are unflinchingly on one another. There’s a chance they’ll even outshine the MMA-supernova that is the card’s Aldo-McGregor main event. This is going to be one hell of a fight.