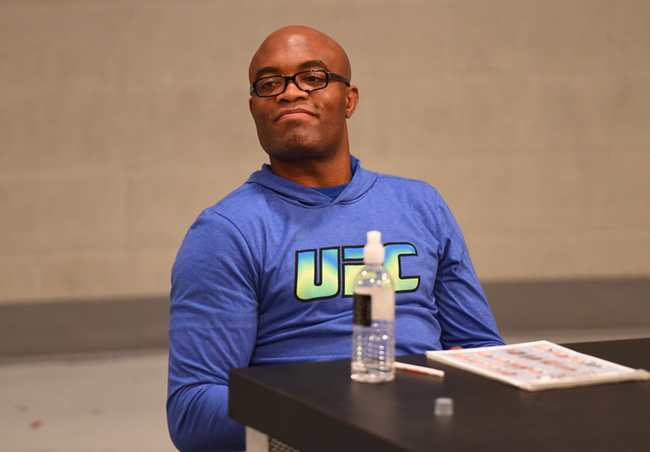 While Anderson Silva’s wishes to participate in the 2016 Rio de Janeiro Olympic games were well received by the Brazilian Taekwondo Confederation’s administration, it seems that there are those in the community who find it ridiculous. Anderson is officially trying out for the Olympics—confirmed by the Confederation’s president Carlos Fernandes—but Guilherme Felix, the most successful Brazilian athlete in the Taekwondo heavyweight division, thinks it’s all a big joke.

The athlete took to social media to express his frustration with the situation, calling the whole scenario a big joke:

“Let’s stop joking around! The majority of Taekwondo athletes and I are tired of this talk about Anderson saying he’s going to try out for a spot in the Olympic Games. He can try just like anyone else who’s a member and regularized can try.

A lot of people are taking this seriously, but to me this doesn’t go beyond a joke, it’s his personal marketing, everyone’s being careful about what they say—I’m tired of it! I have nothing against him nor do I know him personally, but this is the stuff of jokes, If he really wants to fight for a spot in the Games, come on over! He’s taking a risk, and I think he’s going to prepare himself a lot so he doesn’t embarrass himself! I’m anxious to see. Over here there’s not going to be any more jokes about a serious thing.”

In an interview with UOL Esportes, he expressed that he feels no threat of losing his spot to the former UFC middleweight champion of the world:

“To be honest, I don’t worry about the competition, because when Anderson Silva talks about competing for a spot in the Games, he must have no idea how this process works. It’s like an Olympic athlete saying they’re going to MMA. You need a few years of preparation for that transition, and of course it is possible, but the time Anderson has in his hands is very short, he hasn’t competed in any Taekwondo tournament until now, we don’t have parameters for that and things in a Taekwondo contest are very different.”

Guilherme Felix is ranked 18th in the world Taekwondo rankings.

In response to Felix’s apprehension towards Anderson’s participation in the Olympics, Anderson skipped the controversy and went straight to acknowledging the long and arduous path that awaits him if he’s really to compete in the Olympics.

Posting a video of his Taekwondo training, Anderson captioned it, “Ok you guys, I know I’m totally out of shape since I haven’t trained in a long time, but I’m ready to try, and it’s for that reason that I’m putting in the maximum effort to get a rhythm going, because if I don’t do it I’ll never know if I could’ve made it.”

He followed that praising Olympic athletes, saying that he’s going to train hard as he always has. He said, “I’m at a different level, Olympic athletes are practically super-athletes who are light-years ahead of anyone else. But I will leave my comfort zone and try! The worst that can happen is not getting satisfactory results but at least I’ll try. Besides, I’m doing this to test myself, to know how far I can go, because I believe our mind is fantastic and if it’s good it allows us to do things that others perceive as impossible.”

Considering Anderson’s age—he turned 40 very recently—this is his last shot at trying out at the Olympics, and considering that he’ll be out of the Octagon for at least nine months—possibly up to 18 months—following his May hearing and trial before the Nevada State Athletic Commission, Anderson is certainly looking for a polished fashion to end his career.

Anderson Silva Will Officially Try Out for Olympic Games

The Female Taekwondo Fighters of Kurdistan