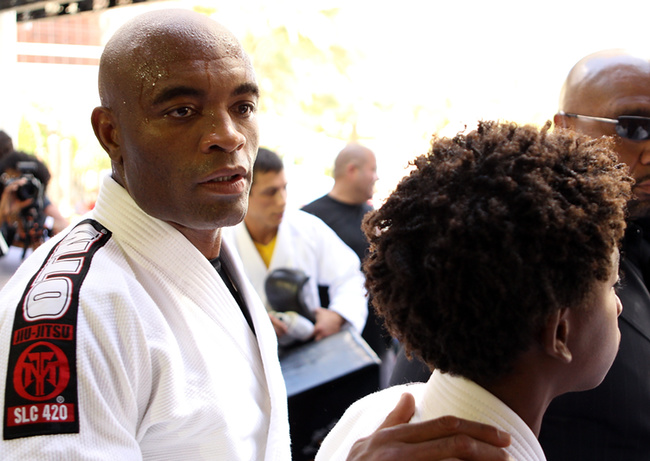 Yesterday, Chris Eccles of the Nevada State Athletic Commission announced that Anderson Silva’s disciplinary hearing—in which he’d present his defense—was postponed again, for a third time, until August 7th. The hearing will determine his punishment for having tested positive for performance-enhancing substances before and after his UFC 183 fight versus Nick Diaz.

Perhaps to pass the time more productively, Anderson announced that he was going to try out for the Olympics, representing Brazil in the Taekwondo discipline. The news met mixed reviews—current Taekwondo athletes found it a mockery, the president of the confederation was happy to let Anderson do it.

It appears that now, however, Anderson has abandoned the dream. Jorge Guimarães, one of Spider’s representatives, said Anderson would not be participating in the 2016 Olympic games in Rio de Janeiro. He told Portal do Vale Tudo:

This question of the Olympics has been dropped. Anderson will not participate in the Olympics. He’s now waiting for the Athletic Commission’s verdict, which will come out soon. We’re waiting, we’ll see if there will be a punishment and how long that punishment will be. He’s been training—Anderson is a guy who never stops training. He’s staying active.”

The Brazilian Taekwondo Confederation’s president, Carlos Fernandes, recently admitted being surprised by the news, which comes less than two months after Anderson made the announcement that he would be trying out for the team. He also revealed, in an interview to GloboEsporte.com, that they’ve not been able to get in touch with Anderson Silva in weeks. He commented on Guimarães statement:

“We’ve received no contact from Anderson. In fact, to be honest, Anderson vanished. We sent a few emails, but he’s not surfaced, we don’t know what’s going on. At no point in time did we say he would participate in the Olympics, but that he’d participate in the tryouts. I think his manager made a mistake about that. However, he hasn’t come directly to the Confederation. To me, it’s a surprise. I think it would be more ethical if he would just come directly to the Confederation. When he said he wanted to try out, he came directly to us via a letter. However, I can’t confirm that his giving up from the Olympic tryouts comes from him. I can say that we sent him three emails, and he hasn’t responded. I don’t know what’s happening.”

Spider’s last contact with the Confederation was in a press conference on April 22nd, in Rio de Janeiro. According to Fernandes, they made plans to be in touch via email.

Fernandes elaborated on his statement by claiming that this isn’t the first time Anderson has disappeared from the Confederation’s radar. He added in his interview that “it’s not the first time. When we made him an ambassador he disappeared shortly after. I think ambassadors need to be present. Then he shows up again two years later, wanting to do something. The Confederation has the decency of going public with that, accepting him and his proposal. He shows up, makes this announcement, then disappears…It’s not really a professional posture.”