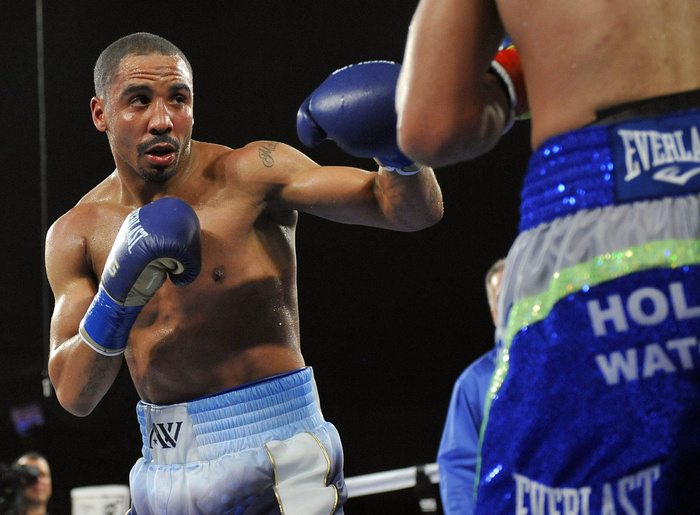 After almost a year since his last bout, Andre Ward will return to the boxing ring this weekend and it promises to be a treat. Due to injuries and contract disputes Ward has managed just three bouts since 2012 and the combination of his remarkable skill and maddening inactivity have made for one of the most frustrating story lines in combat sports today. Regardless of whether or not Ward can return to a more active schedule after this bout as fans are hoping, every Andre Ward match brings with it the opportunity to see crisp, and more importantly, creative offensive boxing mounted on beautiful footwork and backed up by solid defense. Today we'll look at some of the habits and tactics of Andre Ward that make him such a joy to watch and so unique as a fighter.

Firstly, Ward is naturally left-handed which can be something of an advantage in learning to box. Should a left-hander opt to fight as a southpaw (with his right foot forward) he is something exotic and unusual with full, powerful left hands sneaking through from unusual angles with slight steps off line. Should he choose to learn to fight in a traditional orthodox stance it's no loss either, his more dexterous hand is forward and against an orthodox opponent it still occupies the shortest, straightest path to the target. Right handed orthodox fighters spend their career attempting to make their nearest hand more dexterous, natural left handers just start with a natural advantage in this pursuit. Many of the most vicious jabbers and lead hookers in boxing history have been left handers fighting in an orthodox stance—Sonny Liston, Miguel Cotto and Oscar De La Hoya being some of the obvious examples. Of course there is no 'best' handedness / stance combination, it is just different questions being asked of the opponent.

What is interesting about Ward is that he fights orthodox, building off of his tremendously dexterous and powerful lead hand, but will often switch to southpaw for periods. By switching stances he changes the dynamic of the match and forces his opponent to think rather than simply fight from the instincts and habits they have had trained into them. Stopping to think in a fight can often get you in trouble, but not thinking about why what was his jab is now accompanied by a full transfer of weight and snapping your head back could arguably have a worse ending. As soon as his opponent begins to adjust, Ward switches back and they are left playing catch up.

In more recent years he has even begun to switch stances mid-offense. The danger in this is that the fighter's feet have to leave one stance and transition to another in range of an opponent, and getting hit while out of stance will herald an easy knockdown—there are countless examples of this in MMA where regular stance shifters like Demetrious Johnson, T.J. Dillashaw, Dominick Cruz and others have all been caught mid switch at least once. However, Ward will often mitigate this risk through intelligent switching of stance as against the southpaw Chad Dawson.

Note how Ward steps into his southpaw stance as he moves past Dawson's lead leg and out of Dawson's firing line. In this instance Ward looks for a powerful left hand downward on the crouching Dawson but Dawson—still a world-class talent, let's not forget—is just an instant too quick, though he has to break stance to adjust. Notice how Ward's combination carries him back into orthodox stance and he immediately goes back to the body with the straight right hand which is the keystone punch of the orthodox versus southpaw scenario. Ward's beautiful use of his feet to get to angles and shorten or lengthen the path of his punches accordingly was the story of the Dawson fight and we'll touch on that a bit more in a moment.

Similarly, notice here that Ward's comfort from both stances allows him to shift ever so slightly to his left side to create a lead right hook to pass through the center of his opponent's guard.

This is very similar to the famous skip that Mike Tyson used to perform to achieve the same angle with his right hook entering through the front of the opponent's guard.

Another nice touch in Ward's game is his frequent use of the lead uppercut. The left uppercut was for a very long while considered an infighting weapon that was to be used in bouts of 'two fisted hitting'. Even Jack Dempsey instructed in Championship Fighting that:

'The left uppercut should only be used when the feet are even or nearly so.'

The Manassa Mauler's reasoning was that it is difficult to get any power from a regular, more bladed stance, but think of all the applications of the right uppercut. Yes, it's a great way to hurt a crouched opponent and outright starch a ducking opponent, but it is also an excellent way to lift his head. A missed uppercut that forces the opponent to stand upright is an effective means to land a left hook and a right straight immediately afterwards—a classic combination—but it also straightens out the midsection. The right uppercut to left hook to the body is one of the most brutally effective set ups for body shots in the game. When a fighter adds an effective lead uppercut to his arsenal and throws it willingly, he has all the applications of that tool, but off of both sides of his body.

The great kickboxer, Nieky Holzken uses the right uppercut into left hook to the liver.

Ward throws his left uppercut with regularity, but one of his best set-ups is as a follow up to his left hook. This is a favorite of the Turkish kickboxer, Gokhan Saki as well. Fighters often expect combinations to close with the left hook (getting behind the lead shoulder again and 'closing the door' on a retaliation) and will often take it on their gloves. But dropping the hook below the eye line and bringing it up as an uppercut will often play havoc with the opponent, having none of the telegraph and a little bit more reach than the rear handed uppercut.

All the uppercuts and all the hooks.

If we're talking about the application of the lead uppercut we need to name check Alexis Arguello. El Flaco Explosivo's knockout record wasn't a result of some incredible power, but of knowing where to put in which punches and how to be an absolute nuisance to anything his opponent had planned. Arguello used the left uppercut in tight and to set up his right straight and capitalize off of it:

And even as a counter as his opponents stepped in on him. Usually the taller man, Arguello confused even the great Ruben Olivares with this tricky punch.

An old school throwback can be seen in his use of the cross parry to land his right straight. This counter was old when your grandmother was in diapers. The danger of the technique is that the left hand is occupied in parrying the opponent's jab, meaning it is unable to defend against an immediate right hand, the 'two' in the one-two. The benefits of the technique are that the parry with the lead hand means that the opponent's own left hand has no chance of returning to his head before the parrying fighter's right hand does. This counter is applied best when the opponent is showing a jab but proving reluctant to follow it with anything more meaningful.

But what makes Ward so special is his combination of the classical methods and the new age thinking. The switching of stance is perhaps the biggest 'new school' asset of his game, but his work specifically in the match with Dawson demonstrated a good deal of what has changed in boxing in the recent generation. I often get told that while kickboxing and MMA are still rapidly evolving, boxing seems to have finished its evolution but of course that isn't true. Until the last couple of generations of fighters, the southpaw versus orthodox match up was considered to be all about the rear hand and stepping outside the lead foot. It used to be that promoters were uninterested by southpaw versus orthodox match ups because they were not very fan friendly with a ton of front hand slapping at the opponent's front hand and loading up on power punches. But in the past two decades especially we have been seeing a greater use of the lead hand and of the inside angle in southpaw versus orthodox match ups.

When a fighter steps to the left or right side, he can lengthen and shorten the path of his punches. For instance, stepping forwards and to the outside of a southpaw's lead foot, an orthodox fighter lines his right shoulder up with their center line, shortening the path of his right straight. That is the 'outside angle' which is still the bread and butter of a southpaw versus orthodox fight. However what you will see more and more in the modern era is the shortening of the left hook and jab by stepping inside the opponent's lead foot. This can be a little awkward as it is almost a step across oneself and can involve sacrificing some balance, but the effects of this step are clear to see.

When Miguel Cotto fought the great but somewhat past it Sergio Martinez, it was this same cross stepping left hook which did the damage.

Especially when Cotto paired it with the body jab and had Martinez's elbow clamping down to his body.

Tightening the path of a hook or sneaking a driving straight through with an inside step makes sense, but what could be the value of lengthening a punch? By stepping out to the same side from which the strike is thrown, it's path can be lengthened and while this doesn't aid the speed or allow the fighter to sneak it in by shaving the distance travelled, it does give it a decent chance of circumventing the opponent's guard.

After Dawson began tightening up his guard against the lefts which had been sneaking through on Ward's cross steps, Ward managed to find the mark with left hooks behind the guard from the more typical outside angle.

Notice the lead foot placement and how his positioning allows Ward to lengthen his path of his hook around Dawson's guard rather than cutting the hook down to sneak inside of it.

The punch statistics from the bout were telling. They show just how well Ward's movement and positioning was allowing Ward to catch Dawson with the left hand. 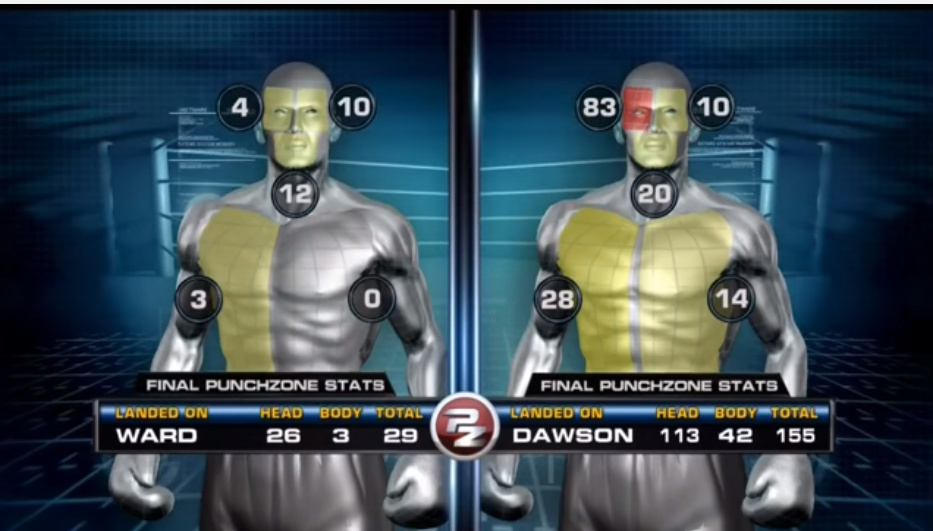 I could ramble on about quirks, habits and choices in Andre Ward's game that make him unique but this article was only supposed to whet the appetite for this weekend's bout. Andre Ward returns on Saturday night to take on the undefeated Cuban light heavyweight and fellow Olympic gold medalist, Sullivan Barrera. If Ward turns up in anything near to his usual form, it might be one of the better boxing showings you will see this year.