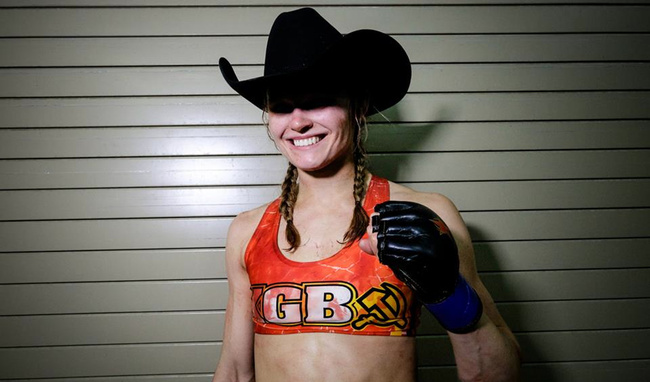 Shreveport, Louisiana’s Andrea “KGB” Lee made one hell of an impression when she made her Invicta FC debut at Invicta 9. First she won over the metalhead crowd by waking out to “Holy Diver,” an epic heavy metal classic by the late, great Ronnie James Dio. Then she stepped into the cage and blew away many an MMA lover by systematically dominating her opponent Shannon Sinn for three rounds and scoring a decision victory, elevating her pro record to 2-0.

Although Invicta 9 was just over a month ago, Lee is ready to go again tonight at Invicta 10 as a last-minute replacement for Vanessa Porto against beloved WMMA legend Roxanne Modafferi. In the days leading up to this match, we talked to the decorated amateur (who boasts a long list of impressive victories in boxing, Muay Thai, and BJJ tournaments) turned promising new pro about discovering MMA, her advantages over her opponent, Darkwing Duck and Dio.

You’ve been interested in martial arts since childhood, but didn’t actually try any until you were in your late teens. Why is that?
There wasn’t much available in my hometown. I lived in a small town called Atlanta, Texas, and there wasn’t anything martial arts related. And not to mention, even if there was, I didn’t really have the money to do that.

You started watching UFC PPVs when you were working as a waitress at a Buffalo Wild Wings. Is that when you decided that you wanted to try it for yourself?
I had already started looking around, once I moved out of town and moved to Shreveport, where I’m living now, at 18. I saw a lot of advertisement for it, and I was working and I was making more money, so I felt like this would be a good opportunity for me to just pick something up, whether it be boxing or kickboxing, something. At that time, I hadn’t heard of MMA, but once I started seeing things like the UFC fights at Buffalo’s on the PPV channel, then that really piqued my interest, because that just seemed more like me. It wasn’t just one thing. It wasn’t just like, “Oh, I could just learn boxing.” I could learn everything! Why not do that?

So somebody mentioned Donny [Aaron, her coach at Karate Mafia, and her husband] and I’ve been with Donny ever since then.

As MMA evolves and becomes more of a discipline in of itself, the way that you approach your training – focusing on each discipline individually and even competing in each discipline individually – is becoming a little more rare. Why do you believe it’s still important to train in each element of MMA on its own?
I think it’s the only way that you’ll excel in the sport. Because for me, I was able to focus on each discipline. I competed in boxing specifically, and did boxing alone. And I competed in Muay Thai specifically and alone, and jiu jitsu tournaments, because when I’m doing that, it’s allowing me to focus on just that one thing. In boxing, I just focus on my hands. And kickboxing and Muay Thai, I’m focusing on hands and knees and the clinch and kicks. Once I get into an MMA fight, then I’m able to put it all together. 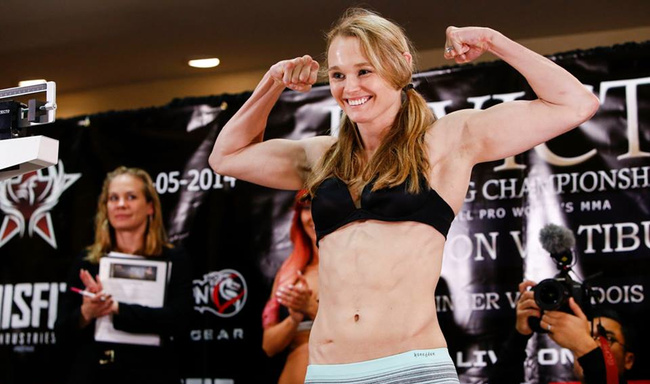 I understand that wrestling is your favorite discipline right now.
Yeah, I really do like wrestling a lot. It’s definitely been eye-opening to me. At first I didn’t think that I was going to like it, but I’m really falling in love with it.

It’s the perfect time for you to be all about wrestling, too, going into this fight.
It is. It is. Roxanne, from what I’ve been hearing for a long time, she’s a really good jiu jitsu specialist and I’ve seen in a lot of her videos that she likes to pull guard. She doesn’t really shoot for takedowns too much. I guess I’ll just have to defend the pulling guard.

You’ve only had a couple of weeks to specifically prepare for this fight and for Roxanne. How much have you changed your training in that time, if at all?
Not much. We never stopped training after I won my last fight with Shannon Sinn and I train everything from standup to ground, so I feel really confident about this fight. I don’t feel like I had to change up anything. I’m just going to go in there and fight the way that I normally fight.

You’ve said before that you believe you have the most underrated ground game in Women’s MMA. Do you think this fight might be a chance to show that off?
It’s possible. If we do end up on the ground, I’m hoping that I can show off my ground game some, but I’m focusing on keeping it on my feet. But I feel like, in the last fight, I did show that I had a decent ground game, considering I was competing against a girl who was a purple belt, I was pretty much dominating every aspect of that fight, including when it went to the ground.

Roxanne is significantly more experienced than anyone you’ve faced so far. Do you think that will have any effect on the fight at all?
No, I don’t. I know she’s more experienced than every fighter that I have fought and stuff, but I think that she’s gotten a lot older and I don’t think that she’s as athletic and I don’t think she is as quick as I am. I feel like I’m definitely going to be a lot stronger than her in this fight.

Your first pro fight was in September. Your first Invicta fight was November, and now you’re fighting again in early December. Do you like this pace and is that something you’re hoping to keep up?
Yeah, it’s a good pace. I don’t mind staying busy this way. I don’t mind staying active. I know, being at this pro level, I might not be able to fight as often as I did when I was an amateur, but I’m going to fight as much as I can.

After winning at Invicta 9, you seemed to have a solid, longer term plan in place to slowly pursue a shot at the flyweight title. Winning this fight could significantly speed up that process. Are you ready for that? Is that something that you even want to think about right now?
I know everybody thinks that if I win this fight, then I’m going to get a shot at the title next, but I don’t believe that that’s the case. I think they’re still going to allow me to have a couple more fights before they offer that opportunity. 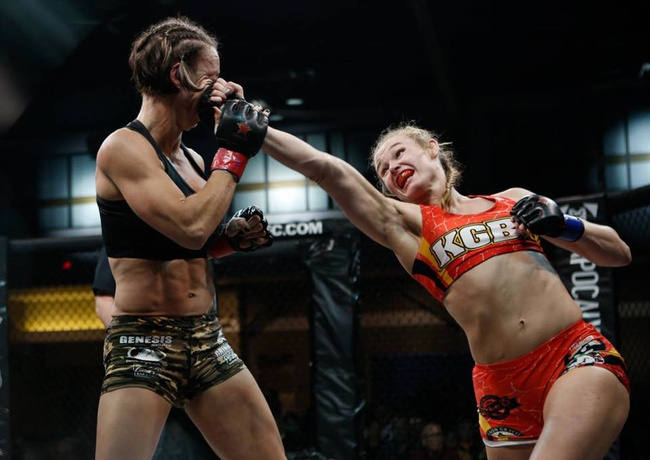 When you accepted the fight, Roxanne posted a video in which she thanked you for taking it. The video included a quick Darkwing Duck clip. I’m Roxanne’s age, so I remember the show, but I also remember it only really being popular with my specific age group. Did you even know who that was when you first saw it?
Yeah, I did. I like all of those cartoons. They’re not the same anymore.

What did you think of that video?
I thought that it was cute. It shows that she’s got a lot of confidence, and she’s ready to fight. So am I.

At Invicta 9, you walked out to Dio’s “Holy Diver.” Why did you choose that song?
“Holy Diver” was one of the first songs that me and my husband listened to when we were working out together. I like Dio, and “Holy Diver” is one of my favorite rock songs. Not to mention, it’s real music. Today, it’s not quite that good.

I’ve gotten a lot of compliments on that song. It’s crazy. I didn’t expect that kind of feedback. It’s weird. I like it, though.

Will you be returning to Dio for this fight, or are you moving on?
I’m moving on. The same genre, but different song.

Is there anything else you’d like to add before I let you go?
I would like to thank my sponsors. I would like to thank Article 15, Champion Nutrition, Herbalife, Martial Arts Life Apparel, X-lon-X. Classic Stone, Cash Time, Larkin Development, and I’d like to thank all of my coaches at Karate Mafia, Elite Combat Academy, Dement Bros. Boxing, also Relson Gracie Jiu Jitsu.

I’d like to thank everyone who’s ever helped me to prepare and get ready for every single fight that I’ve ever had. Thank you to all of my fans and friends, my family. Everybody that supports me. I’d really like to just say that I really appreciate you all. Thank you so much.

How many of those people are going to be there to cheer you on in person, seeing as how this is pretty close to being a hometown fight for you?
There’s going to be a lot of them there at this fight! I’m going to have a lot of people come out to support me. A lot more than I’d have expected, so I’m extremely excited about that.

The Karate Hottie Returns: Michelle Waterson on Defending Her Title at Invicta 10