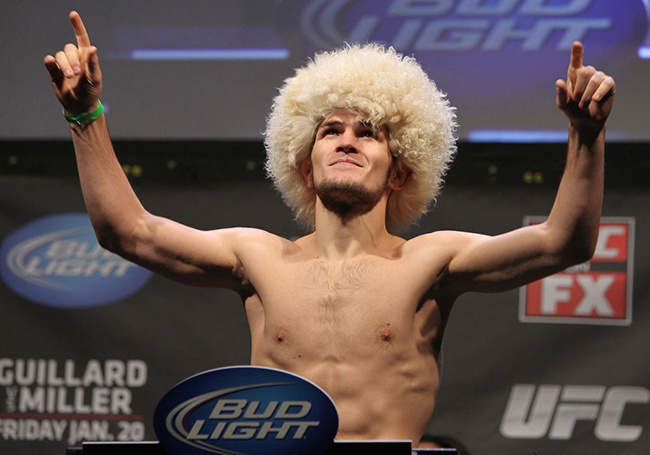 You can go ahead and file this under bizarre. And Russian.

There’s a video circulating around the Internet these days from 1997 that shows a 9-year-old kid in Dagestan wrestling a bear cub, and apparently that kid is Khabib Nurmagomedov, undefeated UFC lightweight and the man with the best hat in all of professional sports.

Before we get too excited about this video, it’s good to remember that Russian combat-sports delirium is hardly unprecedented. When it comes to mixed martial arts, the Russians apparently consider it a point of pride to trade in the strange, the off-putting, the collective, and the just plain ultraviolent. This may be the first time we've seen anything like this, but we’d be shocked if there weren’t other Russian kid-versus-bear videos floating around out there.

But what we really can’t figure out, not being licensed zoologists, is how the bear got so technical with his wrestling. Do bears have to be trained to sprawl like this bear does at the 0:04 mark, or does that come naturally? Or how about the textbook underhook the bear uses to get back to his feet (paws) at 0:20? And then there’s that picture-perfect ankle pick at 1:10. And why, if these people are willing to let their children wrestle a bear, do they feel the need to chain that bear up? Aren’t the kids already in a compromised position? And does this mean Khabib Nurmagomedov would feel more comfortable in the Octagon if his opponents were chained to it? Or if he were allowed to fight in a red, white, and blue track suit?

This video, like so many others related to Russian MMA, raises more questions than it answers. All we know is that if the other men in the UFC lightweight division weren’t scared of Khabib Nurmagomedov before, they might want to consider it now. Champion Anthony Pettis may be an artist in the cage, but we can’t imagine he fought many bears growing up in Milwaukee.

Fightland Talks to: A Guy Who Boxed a Goddamned Tiger Shark