Are Weapons and Suits of Armor the Future of MMA? 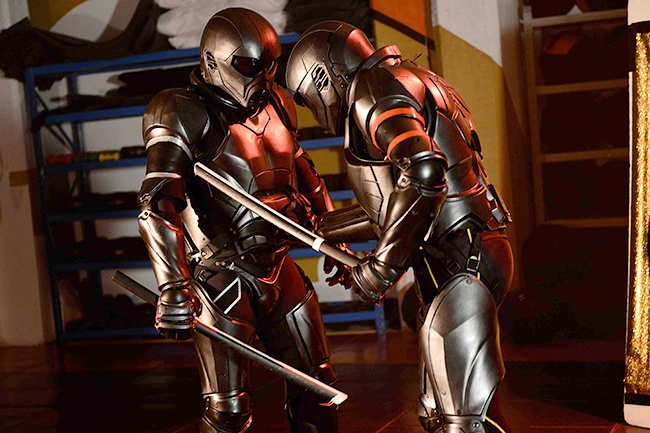 If you had told me five years ago that I would be saying I wanted to learn how to fight with weapons, I would have laughed at you. But, recently, I’ve found myself drawn to the idea. Maybe during the last couple decades of MMA my taste changed, or maybe it was the hours I’ve  spent watching the civil unrest in Ukraine and Venezuela, but suddenly, I want to pick up a sword or a stick. Plus, what am I going to do when the Apocalypse comes and a roving gang of machete-wielding thugs arrives at my mountain camp to take my food away? Pull guard?

Last week, Australian company Unified Weapons Master (UWM) unveiled their prototype of a body armor suit so technologically advanced they claim it will be a game-changer in the world of combat sports. The UVM body-armor is filled with electronic sensors and registers the real force behind any kind of strike then “quantifies” the real-life damage of a stab or slashing knife wound. The suit protects the user from injury while generating real-time data that can be illustrated to an audience by using CGI-generated 3D visuals. By providing what they say is an objective measure of who would have won in a “real combat situation,” UWM seeks to bring weapons-based martial art systems into the mainstream.

Admittedly excited about the possibility that I might one day be able to attack my editor with a battle axe, I called creator Justin Forsell to get a better sense of his armor suit and attempt to convince him to send us a prototype.

Fightland: Is your technology about combat sports or is it more of a style vs. style exploration in weapons?
Justin Forsell: We are really keen to not only find out who the best Kali master is but find masters of Kendo, Chinese staff, Indian Kalaripayattu, Thai Krabi-Krabong. We want to put them all against each other, find out what the best weapon is, what the best system is, and watch the evolution through this technology.

To be honest, there is nowhere right now where you can go and really see objectively what would happen in an exciting format. For example, western fencing has a scoring system but you can’t get an objective view of what would really happen. My wife’s father was a fencing instructor and I remember him telling me that when you get tapped on the shoulder in a real fight it would do nothing, and even if one second later you slash your opponent across the throat, your opponent still wins because he tapped you on the shoulder first.

There are two types of applications of our suit: blunt trauma and fracture profiling, and we are working on what we call EWS, Edged Weapons Simulation. Even though we are, say, using heavy blunt weapons right now, the EWS will take the force, anatomical location, and direction and put it into our database. Even though it wasn’t an edged weapon we can simulate damage and represent the slice with CGI. It will be a very scientific and entertaining view of it.

We have a different format than the mixed martial arts you see today. The press has run with this idea that what we are doing is an extension of MMA, but it’s a different experience altogether. The ruthlessness and speed of the knife arts is incredible. Maybe we will need to create a format to give contestants three lives. Maybe when someone “dies” the ref comes in and gives them a standing eight count. I don’t know. We are still creating what the sport might look like and we are hoping to shape it with the help of our membership and the experts around the world.

With the invention of gunpowder, weapons-based martial arts fell into obscurity, but with this new technology, and the modern, more educated, MMA audience, we hope to see real weapons martial arts reignite. I can’t tell you how many messages we get about this. Not just from the Asian martial artists, but also the European artists. The Europeans have ancient textbooks that map out the actual geometry on sword fighting. People are begging to suit up and get it on. You would be amazed how many communities have contacted us. The other day we heard from some students of Jogo do Pau, an obscure medieval stick-fighting group from Portugal that apparently has thousands of members. Has anybody heard of Jogo Do Pau!?

There are over 300 systems of martial arts. We went and looked for martial arts that had a high level of development and large curriculums with weapons-based training within their syllabus. We found that about a third of martial arts have some form of weapons system within their curriculum, and a lot of these arts are embedded in the national histories and cultures of these countries. The nationalistic fervor that will come when we put a Japanese Kendo master from the police college in Tokyo against a Shaolin staff master from the Shaolin temple will be incredible. Who wouldn’t want to see that, right?

There are some tricky questions that come from pairing different styles under this format.  It gets really tricky when you start to think about different weapon matchups.
Well let’s find out right? Science will be the judge. Technology will be the judge. Without this type of technology, nobody knows. 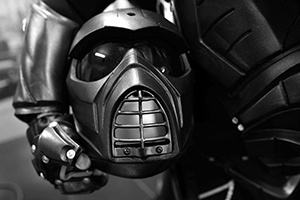 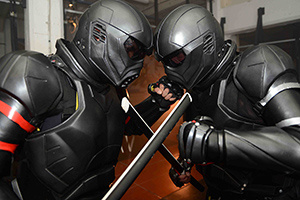 Despite UWM’s claims that weapons-fighting styles will be put to the test for the first time using Justin’s armor system, a group known Dog Brothers Martial Arts, whose motto is “Higher Consciousness Through Harder Contact,” has been putting on no-holds-barred fights with Bokken, whips, shock knives, aluminum practice knives, and Nunchaku since the 80s--all with little to no protective equipment.

One of the founding members of the group, Marc “Crafty Dog” Denny, is a lifetime martial artist whose experiences growing up in the Bronx and traveling in South America as a kid spurred his appetite for a more hardcore set of martial skills that incorporated weapons and acknowledged multiple-attacker scenarios. He became a student of Kali under renowned master Guro Inosanto, but he found that hard sparring was lacking in the weapons-arts, especially in what he calls the “adrenal zone.” Whereas MMA provides a full-contact venue for open-handed fighting systems, Denny says, weapons-based systems lacked a realistic forum.

We reached out to Marc to get his take on the new UWM armor and asked what effect he thinks it may have on the future of martial arts. 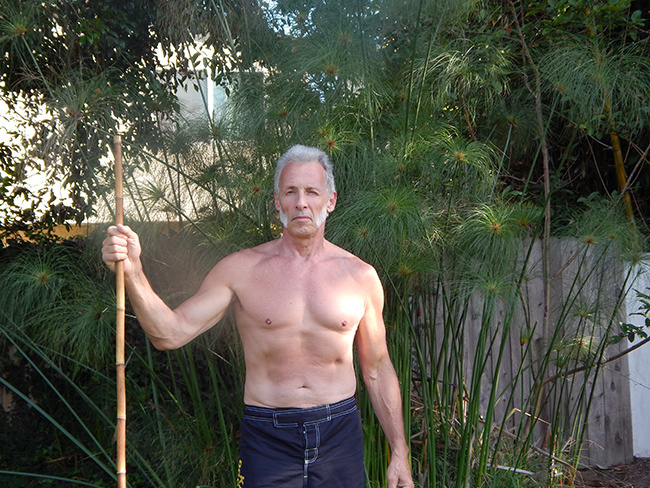 Fightland: You were asked to put on a full-contact stick-fighting match during the first UFC, but it never happened.
Marc “Crafty Dog” Denny: Art Davie approached me back when the UFC was still an 8-man tournament--when it was still style vs. style. Art wanted to have a special event between the semi-finals and the finals so the fighters would have a chance to rest. But around this time Senator McCain was on his “This is human cock-fighting and it needs to be stopped” thing and the UFC kept holding off and holding off. Later they said, “Look, we have to have time limits. This format is too hard on Royce [Gracie]. He’s this 170-pound guy fighting these behemoths.” So, they went to a more conventional structure of one fight per night per man. And so there was no longer the need to have us between the bouts.  Art wrote us a letter saying that they had the greatest respect for what we were doing but that it was too extreme for the UFC.  Keep in mind that this is the UFC in their heyday, where the list of rules was pretty short.

How do you feel about this new UWM technology? Does it have the potential to bring weapons into MMA?
Let me see if I can reduce this to the essence. It looks ingenious, and it looks like a wonderful way to have a Filipino martial art, or some other weaponry, tournament. But I don’t get how somebody can claim that it’s fighting. The press’ effort to connect this in peoples mind to MMA---that I’m not really getting. The whole point when we started Dog Brothers was to get away from the gear as much as possible. I’m not getting how this can be considered anything like mixed martial arts with weapons.

When people don’t feel pain, or run the risk of getting dropped, they tend to just stand in front of each other, whack-a-whack-a, and one guy gets hit 70 times and one guy gets hit 78 times and he’s the winner. The idea of having impact devices in the armor is ingenious, but you will still have behavior problems: people taking hits that they wouldn’t ignore in real-time. Or, conversely, people might act differently and avoid certain impact points that would cause them to lose. Either way, there is not enough fear. The adrenal state is what it is.

MMA is not sparring either. You can get knocked out. It’s a fight. I’ve trained with many MMA fighters. These guys are some serious badass guys. What they do is a fight. Sure, it’s different than on the street because there are no eye-shots, groin-shots, or head-butts, but you best believe in a street-fight these guys are going to win most of the time because they have tested what they do in the adrenal state. Without that, what is this?

When you are dealing with swords, you don’t have many exchanges. You will have people just whacking as fast as they can, each one trying to get over the threshold where their opponent is declared defeated. It’s not a test of a man or a test of his heart. It’s just sparring. It’s tournament stuff.

I may be wrong, but in the video you see a guy getting hit by a staff and he’s like, “Yeah, I’m fine.” How is that a fight?

Will the Filipino martial arts dominate the weapons scene like BJJ did in the beginning of MMA?
As Bruce Lee said, “Man is more important than system.” As the Dog Brothers have expanded into Europe, we have found that the Europeans have been doing wonderful work exploring the sword fighting manuals of the Middle Ages. They have some good athletes doing some good things. It would be a real mistake to get into the style vs. style chauvinism. We have BJJ incorporated into our stick-fighting. I trained with the Machado brothers. We have a saying: “Smuggling concepts across the frontiers of style.” It’s about the search for truth. Your going to be seeing a synthesis in weapons arts like you do in MMA.

Hear this clearly: I’m working on something big. I’m working on “MMA with weapons,” and it won’t be like the armor system. It will be real fighting. I should have a big announcement in May. We have been working quietly, but we are about to show up on the radar in a couple months.