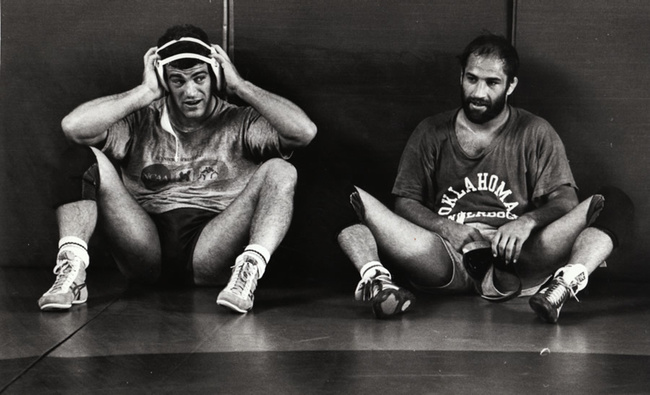 Mark (left) and Dave Schultz during wrestling practice in 1984

"Dave had always sort of been my protector." Olympic gold medalist, wrestling great and real-life Mark Schultz to Channing Tatum's movie version of him, is compact, solid and still seemingly fluid and even undoubtedly deadly, at 53.

And he probably wouldn't get his feelings hurt to hear us say that he's nowhere near as handsome as Tatum who'll star in the film Foxcatcher that hits this November. Which says one thing if you're a Hollywood film watcher: Oscar consideration.

"But Dave had started wrestling before me and like brothers do I figured I need an edge so I started looking around to see who was the baddest ass around and I settled on Karate," said Schultz at a stopover at Leopoldo Serao's Brazilian Jiu Jitsu hot house in Mountain View, California. "Tang Soo Do to be exact. And when I was ready, over something stupid like who was going to take the garbage out, or something I don't even remember, we went at it."

The results, for anybody whose followed how well karate has done in the UFC as of late might have expected, were painful and swift. Dave beat the slop out of him. Which had a couple of unintended consequences: Mark would never seriously train karate again and at least for the first little bit of time he refused to re-enter the house and slept in the car in the driveway.

But out of the best beatings come newer, better paths and this one led to Mark becoming a wrestler. Not even just a wrestler. But one of the best to ever walk the earth. Which is strange considering his first season's record was 4-6 and two years later as a senior he didn't do much of anything until the state qualifiers where he, in short order, tore through league, region, section and state. 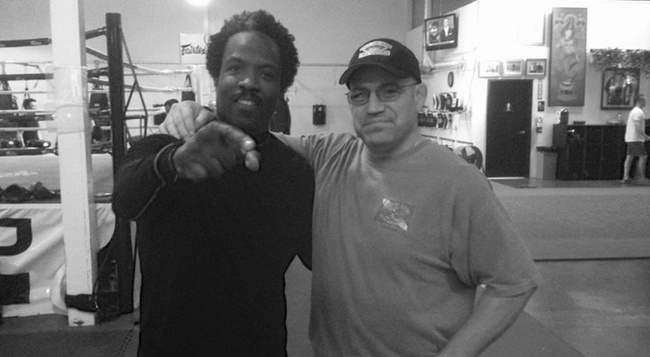 From there to UCLA, then Oklahoma, NCAA championships, World Cups, Pan Ams, National Open. Worlds (twice for the gold), and the Olympics (once for the gold) where Mark had famously broken an opponent's arm in the Olympics and in response to the warning he had received, groused "I guess they're trying to turn this into a sissy sport."

Which is what we were laughing about where we used to train. Especially if by "train" you mean cower in the wrestling room while Mark and Dave ripped through there back in 1984, at Stanford. Right before the Olympic arm break. Mark was a force of nature and reconciling that with the gentleman standing in front of me now was taking some work.

Yes, there was the well-publicized killing where the lunatic John DuPont's descent into madness was capped with shooting Dave to death, Mark's sort of lost period post-shooting, his wrestling coach gig at BYU, his losing it possibly as a result of him fighting in the early UFC where he dominated as clearly as he had on the wrestling mat. And where he finally showed his real love for any and all grappling arts by marking his time with BJJ greats Rickson Gracie and Pedro Sauer. 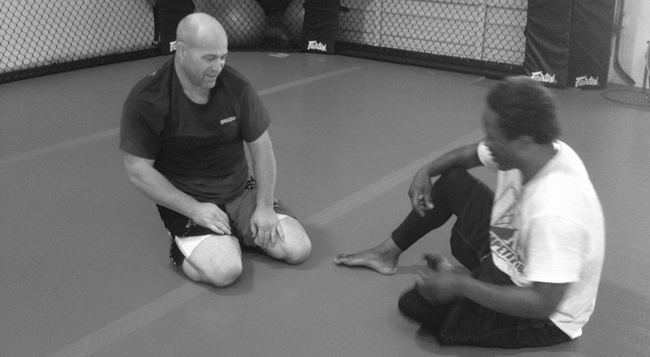 And since then? Moving up to Oregon, giving seminars, waiting for the movie, trying to get his book of the same name published in advance of the movie and doing battle with a steady variety of life's miseries—from ex's to unidentified gripes with folks inside the wrestling world fence.

"I was angry at first since I expected the movie to be an autobiography," said Mark. "But then I realized that Bennett [Miller, the director] had to make a movie. Maybe it was just because Steve Carrell was so good [as DuPont]. It was eerie. I couldn't look at him."

Which is what happens with the greats sometimes. Dan Gable's sister was killed right before the only match he ever lost. And afterward? A legendary tear of unbroken wins. It didn't quite work that way with Mark, the murder unmooring his life as he had known it, but the movie and Hollywood calling has been great for him it seems. Therapeutic in a lot of ways. And being able to conclude that portion of his story probably makes it even more so.

But there's still fight in the fighter since, when we hit the inevitable query I, feeling like I was standing outside of myself, heard me ask with much more bravado than the situation called for, "hey, you want to go for a little bit?"

He didn't miss a beat when he said, "hell yes." This from a man with neck surgeries under his belt. Well, that and 53 years.

We stepped on the mat and locked up and I'd quote what Chael Sonnen, the now-disgraced fighter said about matching up with light heavyweight champion Jon Jones, "it was like being in there with a bear." 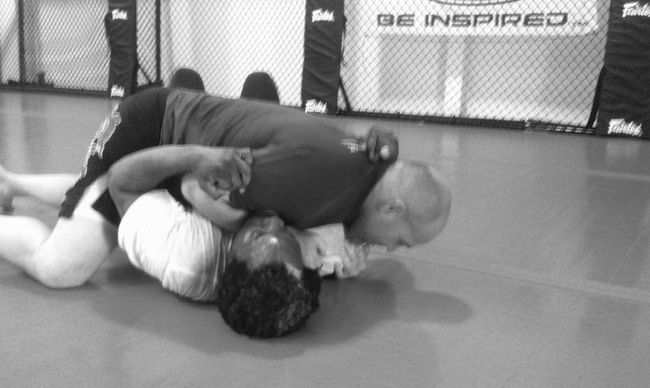 Which is to say that everywhere Mark touched you hurt. More than hurt even, it didn't just get you close to the line that felt like total collapse and ensuing chaos. It got ON that line. So much so that like a hurricane or some other great natural disaster you're just felt like you were hoping to live through it.

Mark's a devoted Mormon but well-codified moral systems also only goes so far when a guy who's been doing what he's about to do to you since he was a kid starts to do it. Like they said about the Predator, "there's no stopping what can't be stopped," and indeed that was more true on that mat that day than ever.

To put a finer point on it: I lost as many times in a 6-minute round as a human could possibly lose. And in as many different ways.

Post-facto Mark walks off of the mat and chats with the assembled fighters. I limp a bit behind, he shakes my hand later with a hand that feels like stone and he laughs, "ah, you're a good man, Eugene."

But from a giant like this? Totally and completely OK.