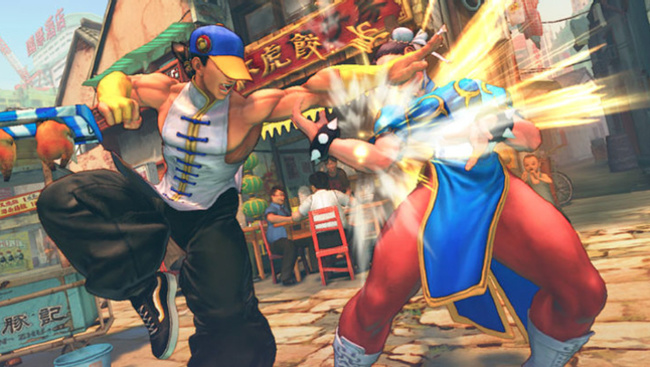 The World Warrior Tournament introduced many of today's best fighters to the martial arts. Its characters were hilarious, and played on stereotypes almost as daft as those in Punch Out, but as an introduction to the martial arts, it was every bit as good as Enter the Dragon. In the twenty-five years since the Street Fighter franchise began everything from karate to White Crane kung fu has been represented. In more recent years the roster has grown to include MMA fighters, savate kickboxers, and even Turkish oil wrestlers.

In the first installment of our round-the-world tour we discussed how 'The Shotos' weren't all that Shotokan, and how the Kenyan capoeirista, Elena mirrors the scholarly debate which rages over the origins of capoeira, be they in Brazil or Africa. We also examined the meia lua de compasso / 'spinning scythe' is the new hotness:

But today we're going to head to Hong Kong, to talk about generic 'Chinese martial arts' through the lens  of Yun and Yang. Introduced in Street Fighter III, Yun and Yang were another example of that lazy game designer favorite, the palette swap. You remember how many of your Mortal Kombat favorites were just recolored versions of Scorpion? Yeah, that's a palette swap and it's a great way to pad out your roster without the effort of creating new characters and new move sets. But as things progressed and later incarnations of Street Fighter III came out, the two were developed with disparate move sets and play styles. 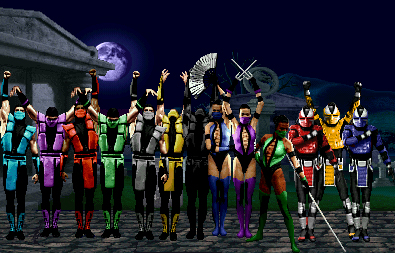 Now what is clear is that Yun and Yang were designed as Chinese martial artists—they use recognizable techniques common to plenty of forms of chuan fa—but they seem to be rather a mish-mash of parts rather than a pure representation of a particular style. Officially their style is “based on bajiquan” and there's certainly plenty of that in there.

Bajiquan, is a form of chuan fa which, like many styles such as Wing Chun, is built on a belief in 'crowding power'. Bajiquan is for close range and is one of the systems of Chinese martial arts most devoted to the use of elbow strikes. Kicks are rare in Bajiquan for this reason, and much time is devoted to getting in close. The six traditional opening methods are worth reading up on if you get a minute, but all you really need to know is that it's about getting inside and elbowing the snot out of the opponent. Bajiquan apparently means Eight Extremities Fist, which is reminiscent of Muay Thai's second name, the Art of Eight Limbs. It's interesting that both have come to appreciate the elbow so deeply ahead of the other six. Presumably because of it's versatility, power, and the little commitment of weight necessary to do big damage.

One of the interesting features in Bajiquan is the use of rising and projecting elbows. Now the rising elbow can be utilized as a strike in itself—the Thai boxers, Yodsanklai and Muangthai have made exceptional use of this as a guard splitter, and in a sport where cuts on the brow can mean an instant doctor's stoppage the upward elbow is a real 'man opener'. But what is interesting is that in Bajiquan, as in many traditional martial arts forms, these upward elbows are often projected forwards more than slashing upwards. Why? Well here's a traditional application of a double rising elbow.

The elbows act as a guard and the body drives in behind them. Now you might have seen this principle in action before—boxers will put up their guard and dive in behind their elbows or forehead, hoping to cut the opponent. But in the modern world of mixed martial arts it can be used much more flagrantly. Randy Couture had tremendous success by raising his elbows and running through punches to get to the inside (check out his old instructionals for more on that, or watch his bouts with Tim Sylvia and Gabriel Gonzaga). Bas Rutten even included a section in his Big Books of Combat where the top man in mount position places his palm on his forehead, projecting his elbow in front of him, and hammers down on his victim by dropping his weight through his head and elbow. But here's one application which caught my attention recently:

Conor McGregor deflects Max Holloway's blow with his guard raised, and jams his elbow forward into Holloway to halt his forward motion. He doesn't make a decent connection or hurt Holloway, but the technique's potential is certainly obvious.

Tradition has it (and martial arts tradition is about as untrustworthy as you can get) that Bajiquan was originally called Bazi quan—meaning 'rake fists' and referring to the loosely clenched hands of its practitioners. You will notice that in many classical forms from all kinds of martial arts, from Bajiquan to Uechi-ryu karate, the forward elbow is performed with an unclenched hand—freeing the hand to gouge the eyes (hence 'rake fist', I suppose) or jam the fingers into the throat. 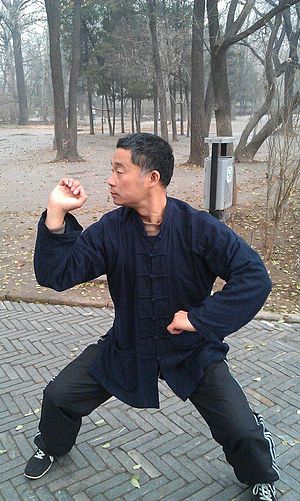 Remove it from its wooden posture and I'm sure you could see McGregor easily finding Holloway's eyes without having to look for them if Holloway had proceeded inwards after the elbow. Not that I'd recommend going full Palhares, but it's good to know these things.

Bits and Bobs from China

Yun's Baji chops can be further seen in one of his specials, Tetsuzankou—and this also highlights an important element of many Chinese martial arts which is still under-appreciated in mixed martial arts: the act of 'bumping'. In Taijichuan this is often referred to as kao. Rather than striking with the extremities, this is a the act of off-balancing the opponent with a well placed shoulder barge, hip bump, or thigh-to-thigh bump.

How significant is bumping? Well in mixed martial arts or fighting, pretty darn significant. Watch Lyoto Machida or Fedor Emelianenko execute their takedowns in striking exchanges, it's not so much about getting perfect control and dragging the opponent down, it's about knocking them off balance with the body and capitalizing on their loss of control. Half the time, Fedor simply ran through opponents shoulder first after his right hand lead.

And sometimes he'd just knock them out and follow through with the bump anyway.

In Bajiquan, the practice of Tie Shan Kao is used to develop this bumping power. Be it against a wall, a tree, or a training partner.

The great Japanese duelist, Miyamoto Musashi only wrote about one technique which didn't rely on a sword in his Book of Five Rings. It was the shoulder bump to the solar plexus and he believed that a good swordsman should be able to kill or at least brutally wind an opponent with it alone.

As mentioned earlier, it's not all Bajiquan. There's plenty in Yun and Yang that comes from other Chinese martial arts, and plenty which doesn't fit at all. Obviously, nobody in the real world is going to barrel roll into a leaping side kick from the floor.

But the light lead leg stance is consistent with traditional Chinese martial arts which prioritize both protection of the groin and speed of the lead leg kick to the crotch.

Furthermore, the jumping crescent kick is pretty popular in Northern styles of Chinese martial arts, which for one reason or another tend to place more emphasis on kicks above the waist than Southern Chinese martial arts. The crescent kick is a weird notion because it is inferior to the round kick in every single way imaginable, it carries almost no power and a decent connection has a good chance of jarring the kicker's own knee.

The only interesting theory I've seen on the crescent kick and Chinese martial arts' preference for it is that, like all things in old timey martial arts, it was designed to close down the groin which is always under attack in traditional chuan fa. Of course, this benefit of the kick's tight line is undone by kicking high. It's pretty much a useless kick but I patiently await the first crescent kick knockout in any full contact venue.

One final lesson from Yang and Yun's style which is a significant factor in many Chinese martial arts is what Street Fighter named White Tiger Twin Palm for Yang, or Tiger Beating Child for Yun. Really, it's a shove. This is something which some time around Chinese martial arts, particularly those which practice traditional pushing hands drills, will hammer home—shoving is really, really important. In a street fight, or on an elevated platform as in the traditional Lei Tai contests, or anywhere with uneven ground—and really that's anywhere you would be fighting all out—being able to shove an opponent a few feet into or onto something is really important.

This is something that has been practiced in Chinese martial arts since the moment of their inception. Here's some Fujian Whooping Crane disciples practicing the simple pushing drill on a rudimentary heavy bag.

And how important is it today? Well, check out Giorgio Petrosyan. Considered the finest defensive artist in kickboxing, the secret of Petrosyan's success is largely in putting together a nice combination or a single power strike, and immediately pushing his opponent back from him. Could be a big shove, could be a little bump, but it immediately destroys whatever they are trying to throw back at him by removing their balance and re-establishing range without the need for fast footwork.

And again, in game form.

Once again, the Street Fighter lads did their research and you have to respect that. What's more, they managed to jam in some of the least glamorous techniques in martial arts—the short range, dirty, ugly stuff—and still make it conducive to an exciting game. Keep your eyes on Fightland for more Around the World with Street Fighter.