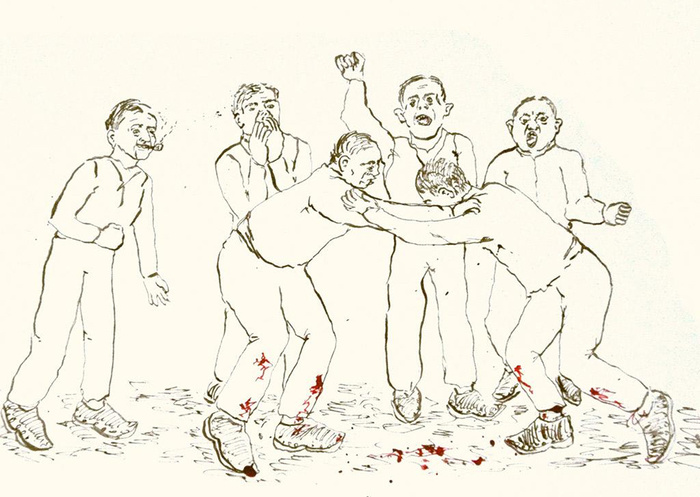 In May 1843 a newspaper in the north of England reported on a fight near Manchester between a man named Ashworth and a man named Clegg. It was a great struggle, the paper said, and though Ashworth eventually won, both of the men were gravely injured as a result. Still, the fight probably wouldn’t have made the papers if the two combatants hadn’t been “both in a state of nudity with the exception of each having on a strong pair of boots.” Only then did the item become newsworthy.

There was a time not so long in the rough-and-tumble world of Northern England that men would gather together and pass the time by kicking each other in the shins with wooden-soled boots. These clog-fights, or “purring” contests, became a part of working-class culture in North England sometime in the 1700s, and despite the fact that they were always illegal and had to take place illicitly behind pubs and in fields, far from the eyes of the police, the tradition continued in the North’s mill and mining regions until the middle part of the 20th century, when it just seemed to disappear. The wooden-soled shoes, or clogs, the men used to bash at each other’s shins were popular during the Industrial Revolution among coal miners and factory workers for their low cost, durability, and comfort in the face of the cold and damp. When they got off from work, these men would often gather together for clog-dancing or to settle their grudges in purring contests, kicking at their opponent’s shins until one of them gave in or blood was shed. Sometimes these fights took place standing up, sometimes they took place with the two men sitting on opposite sides of a barrel. 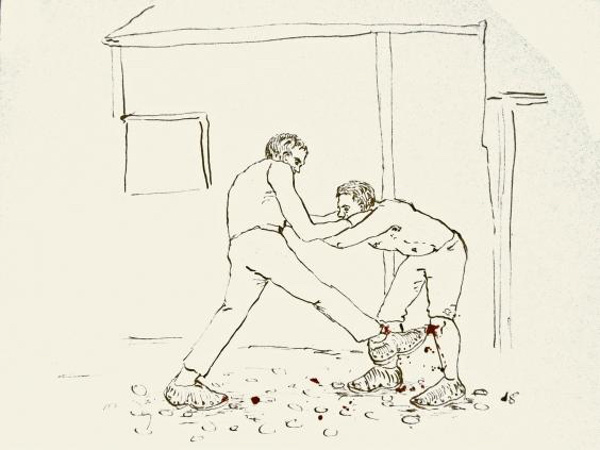 Even in the illegal and brutal world of shin-kicking, though, this was still England, and a sense of gentlemanly sporting honor prevailed. Though the sport was illegal, it had its rules and its penalties for breaking them. For example, if one man caught the other with an illegal groin kick, the aggressor was held down on the ground and his opponent given one free kick at his crotch as punishment.

Pub owners were often enlisted as referees and young boys paid to act as lookouts. Gambling was common. There were even some purring professionals, who plied their bruising trade as far away as Yorkshire. And yes, sometimes these purring men fought in the nude, save for their cherished clogs, which they polished up special for their fights. 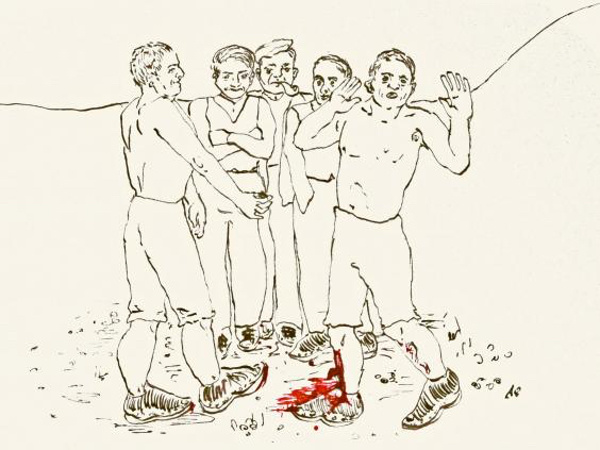 Now an artist from the Greater Manchester town of Wigan named Anna FC Smith is putting on an exhibition celebrating the lost art of clog-fighting at the nearby Gallery Oldham. The exhibit, “Purring – Sport of the People,” will feature sketches Smith drew of famous historical clog-fighting matches and even a few “sensory” exhibits designed to bring a dead tradition back to something like life.

"Clog fighting is part of Northern working-class history," Smith told The Independent. "It was about pride and machismo and it was part of masculine identity. … Honour was at stake. These men would avoid what they saw as less honourable blood sports, such as dog fighting."

That sense of honor apparently extends to maintaining the code of silence that governed the clog-fighting scene back in its heyday, even 60 years after the last purring contests took place. While doing research for the exhibit, Smith found herself stonewalled by elderly northern men who were old enough to remember the purring fights, maybe even take part in them, but refused to talk about them.

"[These] memories are locked away in the minds of older people,” Smith said. “If they don't talk about it now, it will soon be too late.”

For those who doubt the severity of the injuries that could be doled out in a clog fight, there are reports that purring matches often involved one man being taken to the ground, choked, and then kicked in the head (PRIDE-style). And after Ashworth defeated Clegg that May night in 1843, he apparently killed the next man he fought a purring match with and had to leave immediately for Australia as a result. The reports don’t say if Ashworth went there voluntarily or in chains.