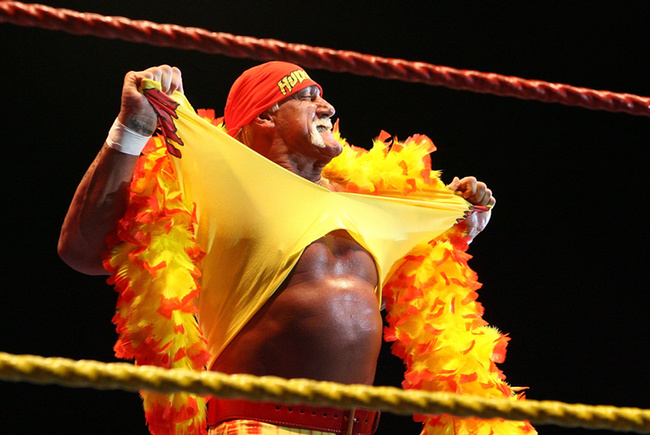 When the People's Eyebrow went up, and the elbow support came off, you knew things were about to get crazy. The crowd went ballistic as The Rock bounced from one set of ropes to the other before throwing out a leg and dropping what looked like a very ordinary elbow drop. Yet his opponent convulsed with pain before flopping back to the mat—motionless as The Great One covered him for the three count.

Signature moves in wrestling have come in all kinds of shapes—from the mundane power-bomb to the gasp-inducing Tiger Driver. But if you don't have one, you aren't going to get far in that industry. Even making the world's lamest finisher your own has the power to raise a jobber into a crowd favorite. Scotty 2 Hotty, anyone? Or how about Hulk Hogan's god awful Atomic Leg Drop?

“But the finisher is the Big Boot and the leg drop, Jack!” Shut up.

Why are signatures such a big deal? Not only do they make writing the end of a segment much easier, they give fans something to grab on to! You might not know much about wresting, but you know well enough that any finish to a Brock Lesnar fight fight is going to happen after he gets the guy up on his shoulders. It's no secret that the last ten minutes of most main event professional wrestling matches are exchanges of signature moves with both guys falling down after each attempt and catching a breather on the canvas. With a few rest holds thrown in of course.

This week a video re-emerged from the UFCs 2012 flirtation with the idea of signature moves. It consists of Fabricio Werdum and one of his coaches talking through four kicks and a triangle choke. The UFC did a similar thing with Lyoto Machida. Machida and Werdum are among the savviest technicians in the UFC and I would watch them teach seminars on YouTube for hours. But the Signature Moves videos straight up sucked.

Werdum's seemed to be from the Human Weapon school of overlaying unnecessary graphics on footage of very basic technique, while the Machida one seemed to be Machida talking through a list of moments—rather than techniques—which the producers had prepared for him, knowing they made good highlights. I don't think anyone would consider the diving punch which knocked out Thiago Silva one of Machida's go-to techniques—and if you went into one of his fights expecting to see it, you'd probably be disappointed while simultaneously missing a whole lot of sen-no-sen, distance control and reverse punches.

I understand that the purpose of the video is to hype the fight, and to get fans to care about Fabricio Werdum, but as always the promotion is passing up on an opportunity to actually educate its fans and improve their experience when they watch the bout.

One criticism which I have seen leveled at the same video series is that “fighters can all do everything in the modern era, they don't have signature moves”. It's a nice thought, but completely erroneous. Fighters in the modern era can survive and thrive on the ground, in the clinch, and on the feet—but they will repeatedly go to the same handful of techniques. Many would be reluctant to admit it, some don't even realize that they do it, and certainly no fighter would be willing to star in a promotional video highlighting his habits and limits—but teaching an audience what fighters' habits are and how to spot habits in any fighter is invaluable.

Pretending that every fighter in a main event is perfectly rounded, or that such a thing as a perfectly rounded fighter even exists, is great when you're getting in to MMA and telling off your friends who like karate and hapkido—but at a certain point every fan wants to better understand what they're watching.

What we're talking about are habits. These are the things I've been pointing out in three articles a week for the past four years. At the elite levels there aren't so many mistakes, but there are habits. Always attack / evade / transition a certain way? Have a favorite move? That's a habit, and those are exploitable. Don't think your favorite fighter has go-to techniques? They do. They're limited and biased towards their favorites, and that's what makes this sport a beautiful art and not a cold, clinical science.

How about Demetrious Johnson? Almost universally considered to be perhaps the most well rounded and most technically perfect fighter in mixed martial arts today. Yet once you notice his stepping right hook, you see it everywhere.

Dodson circles to Johnson's right, Johnson steps to forty-five, takes a southpaw stance, and nails Dodson with a right hand from his new position.

It's the one punch he really feels comfortable stepping in and committing on. And you'll notice his constant stance changing within range of his opponent, and how that got him dropped numerous times against John Dodson.

And you'll notice how he attacks the far arm from side control like clockwork. Habits! And that's not bad, they make him who he is!

Cub Swanson? You noticed that he throws left kicks off of left hooks non-stop?

It's goofy as hell, it's unintuitive to learn, and he consistently does it because he knows how little fighters see it. The ducking low and throwing high kicks which he does almost as frequently as Carlos Condit? The ultra low kicks to the calf and shin? The leading with the right uppercut which makes him so strange and hypnotic to watch, but also exposed him to crisp counters from Frankie Edgar? Habits, habits, habits.

What about the great Fedor Emelianenko and his right hand lead and weave into the clinch? A brilliant, high percentage entrance for him. If the punch knocked his man out, great, but he was really looking to get to the tie up anyway.

Too many examples in the stand up? Ground game? How about Antonio Rodrigo Nogueira's consistent effectiveness with the wrist trap half guard sweep? The same sweep he used to turn the aforementioned Emelianenko over several times, and sweep Tim Sylvia to win the UFC heavyweight belt.

A simple idea, and an unorthodox one, and vintage Nogueira. Nog's brilliant sit outs off of his sloppy shots are just as characteristic—watch any prime Nogueira fight and you're waiting for him to get sprawled on just so he can sit out and threaten his man's back!

Hell, Dan Henderson and Roy Nelson are so beloved in spite of their refusal to round out their games or develop second round cardio because fans know what to look for: the overhand right and the right uppercut.

So how could the UFC go about improving the hype content? Well, by being honest. You can touch on a fighter's shortcomings and not put people off of buying the fight—especially if it's a good fight to begin with. Not everyone can be unbeatable—in fact, I'm going to shock you and declare that no one is. Why not show Werdum demonstrating his classic 1-2, switch kick or 1-2 into the double collar tie, the way he sets up that knee strike every time. Then point out how he almost always leads with the classic one-two, and always uses the punches to force a cover, rather than using one punch to set up a connection with the other.

And because we're terrified to portray fighters as having any kind of short comings—why not pair the revised Werdum video with a Velasquez one? Discuss that classic Velasquez pinning position along the fence—with the single underhook and the head driving underneath the opponent's, free one hand to hit with power. Maybe even mention that Werdum found himself stuck in this position against Nogueira for some time before timing a duck under a punch and turning the tables on the former PRIDE champion. Then talk about Velasquez's tendency to lead with his face, producing butts (probably accidental) and landing him in perfect head position in those wall clinches, but also providing huge power to his opponent's counter blows as Velasquez dives onto them.

It doesn't seem like that's asking too much. Kenny Florian, Brian Stann, Joe Rogan and Dominick Cruz are doing the MMA Lord's work by trying to get as much information out there as possible, and they're doing a fantastic job. But the fact remains that this is a sport which constantly points to its technical nuance in the face of criticism over brutality, yet markets itself in the least inspiring—”these two are going to come out to the center of the octagon and BANG!”—way imaginable.

Make a good fight, tell people why it's interesting beyond “he's never tasted power like this before!” and “this kid gets chokes from crazy positions!” and weirdly, you'll gain more real, repeat pay-per-view ordering fans. Millions of non-fans bought Pacquiao—Mayweather to give boxing a chance for the biggest fight in history. Not understanding what they were likely to get, few of them will be buying a boxing card for a long time. Tell people what to look out for, how to tell who is getting the better of the close exchanges, and they'll understand what they're watching. Signature moves sound corny as hell, but pointing to the recognizable tendencies of athletes really works. NFL fans all over the country can tell you the significance of formations and packages: it inspires better debate, and it develops tremendous passion.

To the UFC I say, embrace the signature move malarkey but do it right. Hell, I'll write you a better episode free of charge if it means you commit the time and effort to giving substantial pre-fight analysis a platform. It might well be the best way to recapture the rapid growth of the previous decade.