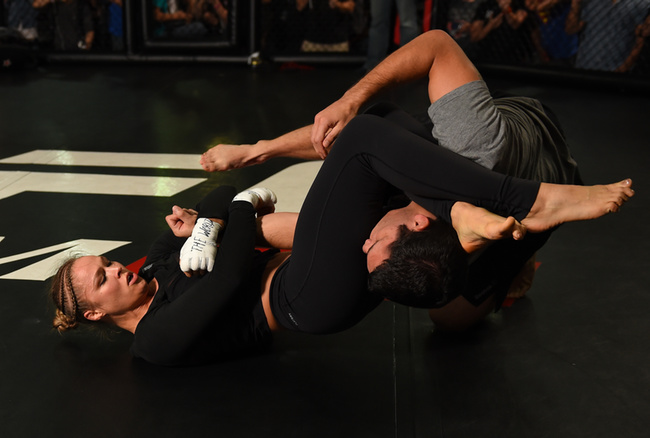 In the legendarium of A Song of Ice and Fire (aka Game of Thrones) we have the tale of Azor Ahai, the legendary hero who wielded the sword, Light Bringer, and who, according to some fan theories, long ago defeated the White Walkers. In this fantasy world, according to some theories, Azor Ahai is supposed to return as a messianic figure, “the prince that was promised.” A popular theory holds that this is none other than the popular heroine, Daenerys Targaryen; another holds that the messianic prince is Jon Snow, or even Tyrion Lannister, or maybe all three. Similarly, MMA, especially among hardcore jiu jitsu fans, has its own legendary god-king: Rickson Gracie. And like the fictional peoples of Westeros, many await his second coming, in the form of a new and unbeatable jiu jitsu warrior, who will take back the sport from the hands of the white wrestlers. Like Jon Snow, some hope that Azor Ahai is none other than Kron Gracie. Yet, as in the case of Daenerys Targaryen, there is reason to believe that the second coming of Rickson Gracie is none other than “Rowdy” Ronda Rousey.

Origins
While much of the world believed that the secrets of unarmed combat were in Asia, the S. American nation of Brazil was the secret repository for the single most effective unarmed martial arts system, Gracie Jiu jitsu. Helio Gracie modified the old judo style learned from his brother into Brazilian jiu jitsu, made famous by the UFC. Emphasizing leverage and balance over brute force, Helio became a national hero in Brazil, defeating wrestlers and judoka from around the world, in no rules fights and submission wrestling matches. Helio also sired, raised and trained the next great champion of the Gracie family, Rickson Gracie. Rickson would follow the footsteps of his father and make jiu jitsu his life, fighting to prove the supremacy of his family’s style on the street and in the ring.

While American Judo hasn’t been recognized as the best in the world, Japan and Russia have historically stronger teams; AnnMaria DeMars became the first American to ever win a World Championship in Judo. Like the Gracies, her roots are also in South America. Her grandmother, Emelia Maria was a native of Caracas, Venezuela. Like Helio Gracie, AnnMaria taught her daughter judo and trained her to be the best. Whereas modern judo tends to emphasize throws over ground fighting, AnnMaria taught her daughter to live and die by the ground game. Unfortunately, due to politics, a lot of judo judges are biased against Americans, so little Ronda Rousey learned to submit her opponents, whenever possible, so as to remove any doubt of victory. In terms of ethnicity, Ronda Rousey in an almost perfect inversion of Rickson Gracie; whereas she is a product of the English speaking world, with distant Ibero-American roots, Rickson is a product of Ibero-America with distant Scottish ancestry. Both Ronda Rousey and Rickson Gracie were raised and trained by their own champion parents to dominate combat sports; one was trained by mom and the other by dad.

Entrance and Demeanor
Ronda Rousey and Rickson Gracie have inverted versions of the other’s entrance. For Rickson Gracie fans, watching his entrance is almost a religious experience. As the lights dim and “Fort Battle” plays on our cell phone speakers, one sees a hooded figure, clad in angelic white, motionless but for his slow walk to the ring. Underneath the hood and robe is the chiseled physique of the last undefeated member of the Gracie family, the Last of the Mohicans, the Chosen One, the Great One, Rickson Gracie. Faceless, he walks down the aisle as fans get the feeling they were watching a mystical warrior. Though both are escorted by members of the Gracie family, Ronda’s entrance seems to be an accidental though perfect inversion of Rickson’s.

Rather than come out to the iconic soundtrack of Last of the Mohicans, Ronda Rousey comes out to the West Covina stained sound of Joan Jett and the Black Hearts. Rather than wearing white, she wears black. Rather than hiding her face under a hood, Ronda’s face stares out with anger and focus. Rather than having a slow manly strut, Ronda paces quickly, her feminine form revealed as she speed walks to the cage. Rather than coming off as a Jedi, she exudes the confidence of a young brat, played by Dakota Fanning in Push. Fighter entrances are always interesting, because in the cases where they are allowed to choose, their choice of music, apparel, entourage and facial expressions give us a taste of who they are and what inspires them. As far as demeanor goes, Rickson is a Vulcan, showing no emotion; but Ronda wears her heart on her sleeve.

Fighting Styles
Who’s going to win, Jones or Johnson? Rickson by arm bar!  Who will be the next President of the United States? Rickson by arm bar! Rickson Gracie fights were so predictable that it became a joke. It was always the same. Rickson would stay too far from his opponent to get hit, close the distance, clinch, take them down, side control, mount, punch then finish via arm bar or rear naked choke. Ronda Rousey’s fights are also predictable, especially in the earlier days: close the distance, clinch, takedown, mount, punch, arm bar. Granted, not all of her fights have ended this way; knees to the body and boxing have also played a role. Ronda is fighting in the era of true mixed martial arts, whereas Rickson is most properly described as a vale tudo fighter thus Ronda has incorporated boxing into her game in a way that wasn’t necessary in Rickson’s day but the modus operandi is basically the same. Both fighters have impeccable technique but use their superior athleticism to maximize their effectiveness. Ronda by armbar!

Places in History
Both Rickson Gracie and Ronda Rousey rule their respective points in the history of their respective genders. Ronda Rousey is the reason why women’s MMA is even in the UFC, while Rickson’s two fights with Takada are what set the fire called Pride FC. In 11 professional fights, using 10 fights with verifiable end times, Rickson has an average fight time of about 5.5 minutes, all wins. Ronda currently has 11 professional fights; in which she has an average fight time of 1.15 minutes, all wins. Rickson fought in a time when almost nobody knew Gracie jiu jitsu; Ronda fights in a time where every women trains jiu jitsu but where none have the depth of world class experience that she does. Yes, she fought Sarah McMann but, just as Lute Livre was to Gracie jiu jitsu in the 80’s and early 90’s, women’s wrestling is a relatively new sport with a talent pool that is not very deep, when compared to women’s judo.

That might change in the future as more women wrestle and in no way is this intended to diminish Sarah McMann’s achievements. The same is true for women’s Brazilian jiu jitsu for that matter. Winning a bronze at the Mundial, in an IBJJF women’s division, is not the same as getting a bronze in women’s Olympic judo; women’s judo is 100x’s more competitive because it has a deeper talent pool, whereas Brazilian jiu jitsu is still in its adolescence. Rickson was head and soldiers above everyone because he came from an insular, almost secret, tradition that spanned more than 50 years of real, no-rules fighting, whereas most of his opponents knew nothing about no-rules fighting,  much less the intricacies of ground grappling, as it is understood today. Rickson Gracie is great but since his time, MMA has evolved in ways that mirror the Cambrian explosion. No other combat sport can say this.

If you were to go back in time and grab Muhammed Ali or George Foreman, in their primes, and teleport them to our time to fight the Klitschkos, they would still be competitive. But would 90’s era Rickson Gracie be competitive against Lyoto Machida? Probably not and that isn’t a dig against Rickson, it’s simply a testament to how fast the sport has evolved, largely because of his example. The same is true for Ronda Rousey. Ronda Rousey is the female fighter of the future; she is Wilt Chamberlain. What she is today is what every female fighter will have to be ten years from now, in athleticism, experience, mentality, diet and technique. The rest of the women will catch up with her, as the men have caught up with Rickson but she probably won’t be competing by then.

Nevertheless, both Ronda and Rickson share legendary status among insiders who have trained with them. Paulo Filho, Dave Camarillo and pretty much any Brazilian old timer will tell you that Rickson is special and that Rickson could submit anyone on his worse day. You also have stories about Ronda tossing men in practice and having the best arm bar in the world, man or woman. Both are extraordinary.

Cyborg Justino is huge. She weighs in at 145lbs and but fights at around 170lbs. Whatever strength advantage Ronda has would be nullified if she agreed to fight Cyborg at a catch weight; and whatever strength advantage Cyborg has would be negated should she make the drop to 135lbs. Cyborg is a striker, a Chute Boxe trained striker with good jiu jitsu. Regardless of whom one thinks would win this fight; punching the brain remains the quickest way to win. Cyborg poses that risk in a way no other Ronda opponent has before.

Bas Rutten is huge. Rickson is about 5’10”, 185lbs; Rutten is 6’1”, 210lbs, more or less. Unlike Helio, Royler or Royce, Rickson is not a runt. His athleticism, combined with his refinement of the most basic techniques, made him more effective than his brothers. Again, that strength advantage would have been nullified against Rutten. Similarly, Rutten is a Golden Glory trained kickboxer, with solid submission skills. Like Cyborg, he could conceivably defend against Rickson’s jiu jitsu, sufficient to punch him in the brain. In the case of Rickson Gracie vs Bas Rutten, we will never know who would have won for there was never much interest in that fight and both are past the days of competition. Besides, Rickson Gracie vs Sakuraba made for a better story and a more even fight.

Ronda vs Cyborg, on the other hand, is the one fight every knowledgeable fan wants to see. The problem is Ronda is smart and her proverbial army has a fort on the top of the hill. There is no rational reason for her forces to come down and meet Cyborg on the plains of 140, even if we desperately want them to. My fellow purists have to accept the fact that the days of Penn vs Machida are forever gone. MMA is a war game; and as Cersei Lannister reminds us, “In the game of thrones, you either win or you die”. The stakes are just too high to give up any advantage. Nevertheless, Ronda Rousey seems to be Azor Ahai, the second coming of Rickson Gracie. They are two wings on the same bird. Though one is male and the other female, though one is an Ibero-American with a dash of British and the other North American with a dash of the Iberian, though one wears white and the other black, they both dominantly leverage their athleticism to exponentially increase the effectiveness of their refined technique and in the exact same ways, making either of them the facetious answer to any question: R____ by arm bar.