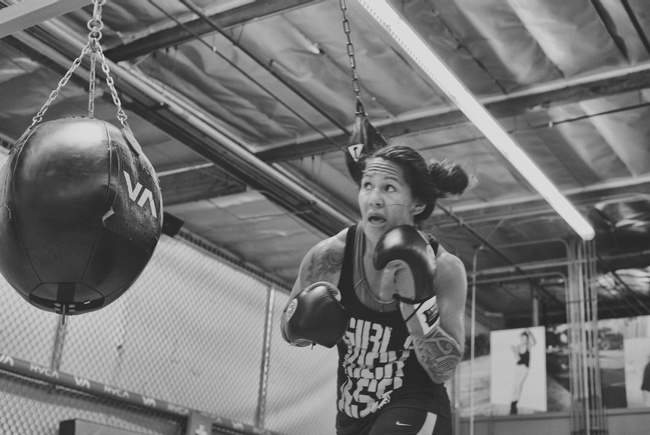 Photo by Nick "The Tooth" Gullo

It's official: Cristiane "Cyborg" Justino is returning to MMA—and returning to the bantamweight division—on Friday, December 5 for Invicta 10.

Justino's last MMA fight was in July 2013, when she defeated Marloes Coenen to become the inaugural Invicta FC featherweight champion at Invicta 6, although she has earned a 1-1 record in the Lion Fight Muay Thai promotion since then. Her last fight as a bantamweight was in 2008, when she defeated UFC fighter and Four Horsewomen member Shayna Baszler at EliteXC: Unfinished Business.

Invicta FC President Shannon Knapp had been discussing the possibility of the promotion's featherweight champion dropping down to the 135lb weight division for a December fight in interviews this past July. Yesterday, UFC.com confirmed the move and the date of her fight, but further details remain in the air at this point. Cyborg's opponent and the location of the Invicta card are still to be determined.

Who or where Cyborg fights next are minor details, of course, compared to the weight she'll be making, or at least trying to make, that night. After years of speculation and trash talk, the controversial fighter's choice to drop down to 135lbs marks the first concrete step that Justino has made toward her ultimate goal: UFC bantamweight champ Ronda Rousey.

Cyborg's current road to Rousey has been long and convoluted. Cyborg claims that she started asking for the fight as early as November of 2011, but Strikeforce told her that Rousey wasn't ready. And Rousey has been calling out Cyborg since the latter tested positive for performance-enhancing drugs (steroids) and was subsequently suspended for a year in December of 2011.

Since then, the fight has remained an abstract concept for a number of reasons. Cyborg's people rejected the UFC's initial offer (the exact same offer that Rousey accepted, as Dana White recently pointed out). Cyborg struggled not just with losing weight, but with the very prospect of losing weight. In late 2012, members of her camp told MMAWeekly.com that her doctor had warned her that cutting to 135lbs would put her heart and future fertility at risk. White insisted that a fight with Ronda would have to be at 135, but offered to hire fitness expert Mike Dolce to help her lose the weight safely. Cyborg continued to accuse Rousey of hiding. Rousey (rightfully) took Cyborg to task for her steroid use repeatedly and (wrongfully) hurled a number of sexist and transphobic shots at her.

The positive development in all of this was Knapp's summer announcement that Cyborg was dropping to bantamweight in an effort to pursue Rousey, and that Knapp would do everything in her power to help her fighter reach that goal. There's been no word on what this means for Justino's heart and uterus, but we do know that she's working with a trainer to help her lose the weight in a healthy and effective manner. Depending on the source, Cyborg walks around at anywhere between 160 and 180lbs as a featherweight, and she's looking to make it down to 155 pre-cut before her December fight. Earlier this month, Knapp confirmed that Cyborg is progressing well. She also mentioned that footage of the final cut might be available on UFC Fight Pass, which will also broadcast Invicta 10.

If Cyborg can make weight, and if she can beat her mystery opponent, then the second most anticipated (or most anticipated, depending on who you ask) fight in women's MMA might actually become a reality. Rousey vs. Carano might be the bigger, flashier legacy fight, but Rousey vs. Cyborg would certainly be the more interesting in terms of the actual combat skills involved.

All of the hubbub surrounding this match, or even the idea of this match, is a testament both to how far women’s MMA has come and how far it has to go. The fact that this, an announcement that Cyborg is on track to do something we’ve been 99% sure she was going to do since July, is one of the biggest news stories of the week for MMA is a truly exciting and impressive thing. Beyond tennis, I can’t think of many other professional women’s sports which would so easily keep up with and maybe even eclipse the attention that pro men are getting. And it’s particularly thrilling given that, just a few years ago, it still seemed unlikely that women would get to fight in the UFC at all, let alone have a fighting chance at dominating its news cycle.

A few years from now, though, I hope it’s just as hard to believe that two accomplished fighters from different weight divisions were ever expected to face each other in the normal course of events. We’ll know that WMMA has really really made it when the next Rousey and the next Cyborg have their own solid divisions to rule, and the idea of them fighting each other is just another GSP vs. Anderson Silva-style fantasy super fight.