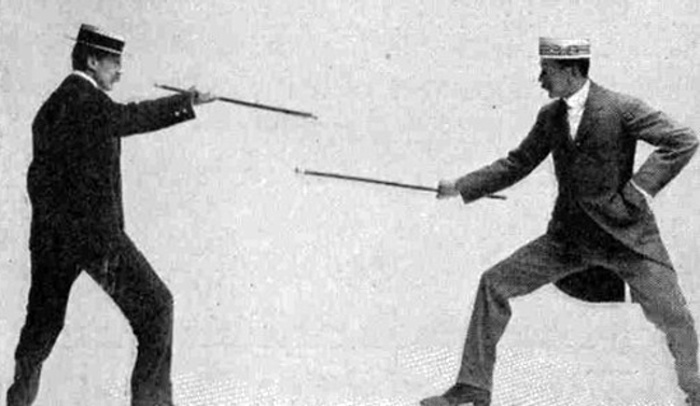 Back in my day, music festivals were strictly music festivals. You saw bands. You saw more bands. And you got to purchase some cool hospital scrub-y pants at the small vendor’s village if you were lucky.

The new breed of festival has evolved into a well-curated, all-encompassing lifestyle event. In between musical acts, you can participate in bad dancing competitions, yoga lessons, and dodgeball, among many other things, at Coachella. You can watch the construction of giant art installations at Wayhome. And now, thanks to Festival No. 6, you can add a Victorian martial arts lesson or two to your concert experience.

Named after Patrick McGoohan’s character in the cult classic ‘60s spy series The Prisoner and held in Portmeirion, the Wales village where the show was filmed, No. 6 is a weird and magical music, arts and culture event that has taken place over the course of three days in September since 2012. This year’s edition, held from September 3-6, features headlining sets by Belle & Sebastian, James, and the one and only Grace Jones as well as appearances by author Irvine Welsh and comedian/actor Steve Coogan. Other on-site activities include talks, films screenings, a reenactment of The Prisoner’s famous human chess game, sound sculptures, and a parade that looks vaguely Mummer-ish (which is a bit disturbing if you’ve seen the original Wicker Man). Perhaps most intriguingly of all, though, they are also offering Bartitsu lessons.

“This year at Festival No.6 we will be hosting workshops in the ancient Victorian martial art of Bartitsu,” the organizers announced on No.6’s official site. “Bartitsu is the West’s first mixed martial art. It was assembled from a number of different fighting styles in the early twentieth century by the redoubtable Edward William Barton-Wright and immortalized by Arthur Conan Doyle as the fighting style of Sherlock Holmes. Barton-Wright promised that an average individual, without excessive strength or speed, could meet every conceivable contingency with Bartitsu. This course aims to resurrect a part of this lost art, doff our top hats to Barton-Wright in the process, but also learn some genuine principles of self-defense.”

For more on the history Bartitsu, we recommend checking out “The Mixed Martial Arts of Victorian London” by Fightland’s own Charlie Gilmour. For more on Baritsu, the Bartitsu-ish martial art that Sir Arthur Conan Doyle details in his Sherlock Holmes stories, Emelyne Godfrey’s “Sherlock Holmes and the Mystery of Baritsu” for History Today is an excellent primer.

Victorian-style combat has been enjoying a resurgence as of late, thanks to the efforts of The Bartitsu Society, the latest wave of Sherlock-mania, and the relentless enthusiasm of the Steampunk subculture, but this seems to be its first appearance at a major festival of this type. And while we’re excited about what this could mean for the future of Bartitsu and the future of musical martial arts lessons (there are a lot of martial arts schools in the general vicinity of Coachella if fest organizers ever wanted to tap into that resource), we do have one concern: Given all of the Prisoner-related activities going on at this Prisoner-themed event, why are there no lessons in Kosho, the bizarro trampoline-based art that McGoohan invented for the show?