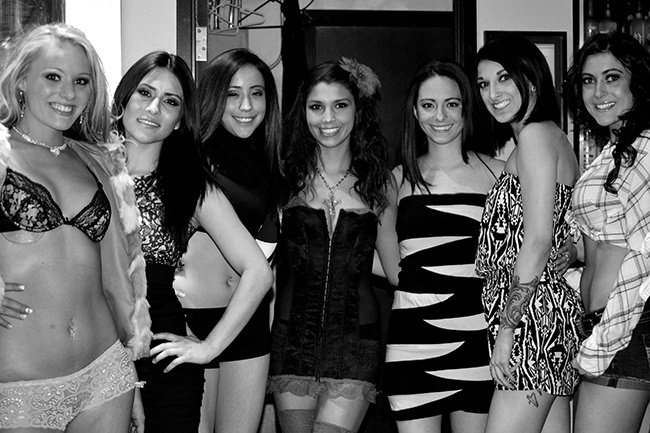 Two weeks ago, on a Wednesday night, I went to Spill, a midsize bar in downtown Denver, where Resurrection Fighting Alliance was conducting a search for a new ring girl. The bar was enjoying a typical weekday night, with a dozen casual patrons cautiously mingling with another dozen MMA fans. A small group chatted with a local photographer; someone was playing Big Buck Hunter in the back.

At 9pm, the contestants started to strut their stuff across the length of the bar, competing for a chance to carry a giant round card around a cage that weekend at RFA 7 and a $500 cash prize. The bar's lights were still on, and the scattered flat-screen TVs continued to play a hockey game. Three judges, including RFA President Ed Soares, who moonlights as the manager of UFC champions Anderson Silva and Jose Aldo Jr., sat in the VIP section toward the end of the mock runway and marked their pieces of paper. The hopefuls walked twice, once in a standard bikini and once in another revealing get-up of their choice.

After a rather unceremonious award ceremony, I hung out with the two finalists, Laura and Taylor, to find out what motivates them to want to be the next Arianny Celeste. Both girls were in the back room, repacking their giant handbags on a large leather booth.

The winner, Laura, is a full-time college student and waitress at Twin Peaks, a western version of Hooters. Her outfit of choice was black, Spanish-style lingerie with red garters.

“What happened was my friend called me, she is like, ‘Hey, we need some girls to go down there and make it a big event,’” Laura says. “She said to bring a swimsuit and an outfit of choice--something that describes my personality. And hey, it's like the chef says whenever I go back to the kitchen at work: ‘Latina and proud, baby!’

I ask if she was confident she was going to win.

“Honestly, I found out about the competition at 6:15 tonight, so I had about an hour,” she says. “I just wanted to come in and have fun. I think that’s why I won. Everyone does it for their own reasons. You know that feeling you get when you step out in front of a lot of people, and everyone looks at you? That’s why I do it. I’m 5’2”. I’m a very small petite girl, and I like to be seen.”

The runner-up, Taylor, was once part of a reality show that didn’t pan out and books as many modeling jobs as she can get. She was an MMA fan first before deciding to try out for RFA.

“Ronda Rousey, she’s my idol,” Taylor says.  “When I saw her first major fight, I fell in love. I actually got to hang out with her that weekend, and she’s an amazing person. I did jiu-jitsu and karate growing up, but dance took priority. I wanted to do swimsuit competitions, but I would love to compete in MMA.”

I couldn’t help but wonder about the possibility of watching a ring girl turn around and fight in the same event. Taylor said she’d be into the idea:

“I would do that! I can’t train right now because I’m in the process of getting healthier. I was diagnosed in July with A.S., a spinal condition that I am recovering from, but I would love to get in the cage once I build my muscle back up. It would be harder for me to do the fighting part. I just would love to be involved in the sport at any level.”

A flashlight-wielding bouncer interrupts. He has to lock up. I ask Laura if she has tips for aspiring ring girls.

“You have to stay fit,” she says. “I hate going to the gym five days a week; it drives me nuts. So I bought a jump rope and every time I get bored at work I just start jumping. All the girls are like, ‘Wait, that’s what you do to work out?’ And I’m like, ‘Hey, you can either eat less and walk more or do cardio whenever you can.’ I like my McDonald’s, dude. I am Roman Catholic and I gave it up for Lent, and I am counting down the days.”

The King of Women Fighters