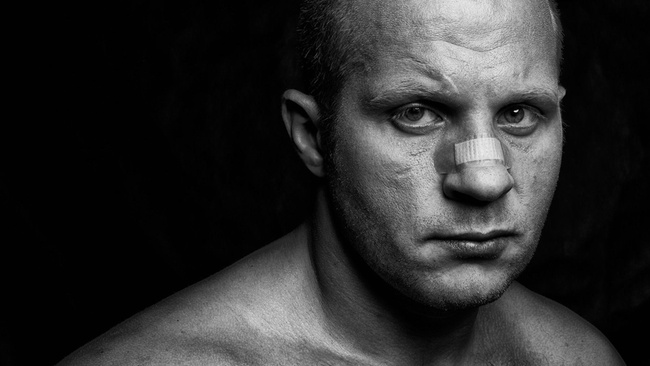 In the winter of 2001, Antonio Rodgrio Nogueira and Heath Herring beat seven bells out of each other in an all out war to decide PRIDE FC's inaugural heavyweight champion. This was almost a decade before the UFC's heavyweight division looked anything like respectable, but PRIDE had built its entire product around the heavyweights. So when the Japanese promotion had announced that the winner of this bout would be its heavyweight champion, the MMA world sat up and paid attention.

Nogueira had already established himself as the man to beat by submitting Mark Coleman from his back, and at the end of a grueling three rounds with Herring, Nogueira had the belt as confirmation. Through the fight, Herring escaped every submission that the Brazilian Jiu Jitsu master attempted, and landed brutal kicks and knees. It seemed that a rematch was bound to happen somewhere down the road.

Stephen Quadros, Bas Rutten, and Mark Coleman provided commentary for the fight and speculated on how impressive the heavyweight division was looking; Semmy Schilt, Mario Sperry, Coleman, Nogueira, Herring. One man wasn't even mentioned, because he wouldn't appear in PRIDE until a few months later, and even then very few thought much of him, the quiet Russian, Fedor Emelianenko.

Coming to the Big Show

Fedor Emelianenko had worked his way up through the lesser Japanese organization, RINGS. RINGS produced a few excellent talents who went on to become stars in PRIDE, such as the Nogueira brothers and Dan Henderson, but those men had already left for the bigger paydays when Emelianenko was picking up momentum. In 2001, Emelianenko rattled off five wins and advanced to the final of the RINGS open weight tournament, where he defeated Chris Haseman with little difficulty.

The tournament title got Fedor signed to PRIDE and dropped into a fight with the enormous striker (and future greatest kickboxer of all time), Semmy Schilt in June of 2002. Emelianenko was able to take down the giant and hold him on the ground, but accomplished little there. It was an uninteresting and forgettable decision win for Fedor as he stepped up to take on the big boys.

Now a look at Heath Herring's chequered record does not give a realistic view of just how well regarded Herring was in the early 2000s. Herring was a guy, one of the few guys, who could do it all. Wrestling was his bread and butter, with ground and pound being his preferred method of picking up wins, but any time he found himself in with a stronger wrestler, he could grapple well enough to survive.

What Herring was especially good at was dragging stronger fighters into deep water and brutally knocking them down and finishing them once they got tired. He did it to the enormous wrestlers Mark Kerr and Tom Erickson, handing the 280lbs Erickson the first loss of his career. Not many heavyweights can time a good high kick today, it was pretty much just Cro Cop and Herring in 2002. Make no mistake, Heath Herring was a bad man in the ring, and after two more wins (one of which came over Igor Vovchanchyn), Herring was matched against Fedor Emelianenko in a fight for another shot at Nogueira's belt.

Stepping from the Shadows

In the lead up to the fight, most of the promotion focused on Herring and what he had been doing differently since his bout with Nogueira—training with Cor Hemmers, working on his stamina, etc. Interviews with Herring focused on Nogueira, and when Herring and Emelianenko did meet in the ring, Stephen Quadros stressed that Fedor was by no means a gimme match. Many fans still didn't buy it though. What happened after the opening bell soon convinced the doubters that Emelianenko had every right to be there.

As Herring came out of his corner, he led with a power kick which Emelianenko immediately caught a hold of. Kicking out Herring's standing leg, the two men tumbled to the floor with Fedor taking side control. It was a bad start for Herring, but this was what he did—turtle, roll back to guard, survive. But Emelianenko wasn't Mark Kerr or Tom Erickson, or even Mark Coleman.

All of those fighters were stationary ground and pounders. They sat in the guard, with their head on their opponent's chest, and hammered away with body, body, head punching combinations. They were smothering, and strong, but unless Herring gave them side control, they were happy to just hold him down and work with little threat. He pummeled and gripped, and worked from the bottom, and eventually they let him up or the referees did.

But Emelianenko was dynamic, flowing like water from position to position and delivering some of the hardest ground strikes ever seen in between. He was posturing up, standing to pass, moving to knee on belly from side control and allowing Herring space to work. And when Herring did move, he'd eat a couple of bombs for his trouble. That combination of positional change and the landing of blows is the balance which is so hard to get right in MMA. Ignore positional advancement and you'll be stuck in guard, doing zero damage. Focus too much on position, and you'll get tied up holding onto positions as the opponent threatens to escape, when you could be landing punches or knees.

Heath Herring had no way to know it was coming, Fedor had been competing in RINGS, where punches to the head on the ground were forbidden. Much of his RINGS career had been spent standing over foetal opponents and awkwardly throwing in punches to their sternum or ribs then despairing of it and jumping on a submission attempt. With no rules prohibiting striking the head, an entirely new avenue had opened up for Fedor to explore and exploit.

Many of Emelianenko's best shots came on the pass in the classic throw-by pass-to-punch combination. From here Herring would turtle and Fedor would ride on the side rather than seek to take the back with the usual urgency. This is an important principle you'll see out of Daniel Cormier and Cain Velasquez, they'll maintain a strong striking position rather than putting the hooks in for the traditionally stronger grappling position.

Herring received a brief respite as he rolled out of the ring to avoid one of Emelianenko's blows. The doctors took a look at Herring's already mangled face, deemed the fight worthy of continuing, and the referee restarted the fight... on the feet. This was where Herring caught the best fighters out. It's where he got Erickson and Kerr, with a big kick on the restart. Herring was never that great at fighting his way up from the ground, but he could stall fights out and as soon as the referee got him back on the feet, he'd go back to work.

Herring stepped in and kicked, but Emelianenko immediately snuffed out the flicker of hope as he muffled the kick, moved into the clinch, shucked his way to Herring's back, and suplexed the Texas Crazy Horse back to the ground.

When we discuss striking on the feet, we often look at the detail of herding an opponent into a strike. Corner him and stand further to one side, you can be sure he'll move out towards the other, then you meet him with a big hook or kick. The same principle can be applied on the ground, in fact much of the top game is built around removing one direction that an opponent can roll out in, and preparing to capitalize when he rolls to the other.

Throughout this bout, Emelianenko used his knee to turn Herring away from him, occasionally into a modified leg drag position. Given the slightest opening, Herring would roll away from him (presumably after the knee bar he had been attempting to roll to throughout the fight), straight into a booming hook. The modern leg drag position doesn't offer the opponent the prospect of a kneebar, but it was another decade before that position became popular in grappling.

Emelianenko perhaps lazily looks for mount, but ends up crossing Herring's legs. Fedor postures up and drops the hammer as Herring tries his usual roll to the turtle.

The further the fight progressed, the more one sided it became. Herring was taking unanswered shot, after unanswered shot. He'd get back to guard or to the turtle for a moment, attempt to move, and eat another numbing strike. Later in the first round (ten minutes under PRIDE rules) Fedor began mounting Herring. As Herring turned to give up his back and wriggle out the back door, Emelianenko started to use the half nelson to set up power swings. AnnMaria De Mars, mother of Ronda Rousey, described the half nelson as one of the most important techniques in groundwork but regretted that it was underused and wrote 'that's a big mistake'.  In addition to setting up some brutal punches as Herring turned away, Emelianenko used the half nelson to attempt to punch in a choke.

At the end of the first round, Emelianenko finally sacrificed top position and Herring was given the chance to work for the first time in the fight. Moments later, the bell rang and the fighters returned to their corners. The rules and regulations which had worked so well in Herring's favour in the past now conspired against him. Seeing the size of the swelling on Herring's left eye, and the cuts above and below it from Emelianenko's heavy blows, the doctors called a halt to the contest just moments after Herring's first effective moments of offence in the fight.

Before the opening bell, the fight world had been focused on the excitement of a Herring versus Nogueira rematch. After the fight, all eyes were on the stoic, pudgy Russian with the iron fists. Stephen Quadros put it best when he remarked that Fedor put Herring 'through the meat grinder'. It was one of the finest ground and performances in mixed martial arts, against a guy who was regarded as the best at surviving and neutralizing the ground and pound of the men who were most well known for it.

Heath Herring never found himself at the top of the heavyweight heap again. But the Texas Crazy Horse remained a fan favourite, and even completed his trilogy with Antonio Rodrigo Nogueira, despite losing every fight. In the second bout, Nogueira debuted his famous anaconda choke to get the tap, but in the third, Herring came within a whisker of defeating his old rival when he knocked Nogueira down with a head kick, but refused to jump on the Brazilian.

Fedor's PRIDE debut had been uneventful, even tedious, but this bout with Herring was his step out from behind the curtain. He had announced himself to the world without saying a word and was on his way into a match with the best heavyweight of all time, Antonio Rodrigo Nogueira. But he was still young, still learning, and it was just one more step in a great series towards becoming The Last Emperor.

Roberto Duran: The Stone Fists of a Nation