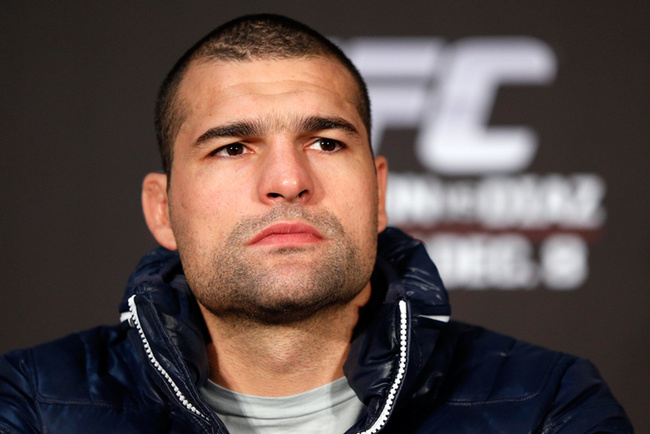 There was a place of “Shoguns” and “Ninjas” called the PRIDE Fighting Championship. Here in this glamorous world, vale tudo took its last bow. Look for it only in DVDs and grainy VHS tapes, for it is no more than a dream remembered, a method of fighting gone with the wind...

I don't like watching Mauricio 'Shogun' Rua fight any more. Unfortunately, it's my job to.

I could scrape a thousand words out about his knockout of James Te Huna as the latter leapt in with a lead uppercut and his hands down, and pretend it marked a turnaround in Shogun. Or I could recount how Shogun brought the perfect gameplan into his bout with the unbeaten and seemingly untouchable  Lyoto Machida. But those things happened in the past.

If we're going to look back, let's really look back. Today I want to talk about the forgotten technique—nay, art of kicking a man while he's down.

I appreciate that there is going to be a large drop off in readership for this piece. There might even be a few folks who go straight to the comment section or twitter to voice their disgust. Kicking a man when he is down has always had a bad rep. Certainly, in the UK at least, the line between a punch up and GBH (grievous bodily harm) can often come down to “putting the boot in” once a man has been dropped.

But equally, there is no arguing with results. And in a sporting contest, where both fighters have agreed to these rules, why not?

If you think soccer kicks and stomps are too brutal in a televised sport, I can get on board. But to those who say they take the skill away from fighting, I suggest watching some old fights. Landing a good kick or stomp to a legal area, on a trained opponent, is a damn hard thing to do! PRIDE FC ran for a decade and in that time there were three or four fighters who could really work effectively against a grounded opponent. Many would simply run in swinging their legs, get one caught, and end up on their back.

Kazushi Sakuraba was famous for his two footed leaping stomps at downed opponents. Do you know how many he actually landed? I've been reviewing his fights lately and I don't think I've seen him land a single one. Jumping over someone's legs is hard! Most of the time, Sakuraba would try to leap high enough to go straight over them, get caught up, and fall forward on top of his opponent.

Sakuraba needed a run up, and often barely cleared his opponent's legs.

Of course, it did allow him to set up weird and hilarious stuff like this sliding side kick.

You know why Sakuraba spent so long in this position? Because guys like Allan Goes worked out that he could out wrestle them all day, but he wasn't a very good guard passer. They opted into this position precisely because it was so hard to do decent damage to them from here. Certainly puts the skill required to land a good stomp or soccer kick into perspective.

But one camp had it right. Chute Boxe trained extensively in the so-called “Sakuraba position”. One man standing, the other on his back, kicking at the standing man's legs. Performing pad training in this fashion did exactly what you'd expect, the Chute Boxe fighters became more comfortable and accurate with their work against a downed opponent.

Something which became a Shogun trademark was the jumping stomp. The key wasn't to have a ridiculous vertical jump, but to move to the side, raise the stomping knee high and have the opponent's legs pass under highest point, the knee, rather than attempting the body as a whole. Sounds simple right? And yet no-one else was doing it.

Notice how Shogun rarely loses control mid jump as Sakuraba often did when he got caught up in legs. You will also notice that Shogun is always jumping to the side of his opponent, not straight onto him. He can land with a foot each side and fall into that mount, but if he misses his stomp he is always ready to turn around and try again.

And the same is true of stomps without jumps. You want to get your knee as high as possible over the opponent's legs. For standing stomps, Shogun would look to eliminate one leg and swing high over the threat of the other one. It's equal parts hand trapping and guard passing, a real convergence of the skills involved in mixed martial arts.

Here's Fedor Emelienanko using a faked jumping stomp to set up a lead leg stomp around the legs. There's plenty of reasons he was the greatest.

Getting good at this game largely destroyed the threat of getting stuck in guard for Shogun. In the finals of the PRIDE Middleweight Grand Prix, Rua met Ricardo Arona—the peak of the Chute Boxe versus Brazilian Top Team rivalry. Arona was a god tier grappler, and had won three titles at the ADCC submission grappling championships against men like Josh Barnett, without ever having a point scored against him.

Shogun's BJJ deserves props in its own right, because he got Arona off of him with a slick omoplata, but it was this stomping guard pass which finished the fight.

Notice how Shogun opens the heels with his hands, this is an old school entry to the double underpass. But instead, he boots Arona in the face, and immediately begins dropping the hammerfists.

So stomps are hard to get off against skilled opponents, how about soccer kicks? What the Chute Boxe boys used to do was allow opponents to turn to the turtle. Classic Shogun was a jumping stomp attempt at a guard pass, dropping into side control, trying for some knees to the head, and then, as the opponent turned in, Shogun would get to his feet.

I'm a tremendous fan of fighters who spring to their feet and work knees to the body from the turtle, but fighters willing to leap up and go for soccer kicks were pretty rare back in the day too. It's that difference between static and dynamic ground and pound that we often talk about. Shogun was happy to lose side control to land a good soccer kick, because he could just try it again anyway. Making passes part of the damaging process makes fighters a lot less reluctant to make space and work once they pass.

The beauty of it is that most of the opponents who fell victim to this would often drop straight back to their back to avoid more kicks, rather than continue trying to get up through the kicks. They'd get stuck in a loop: lay on your back, jumping stomp guard pass. Turn in and try to get up, soccer kicks. Flop to your back, right back to stomping territory.

But soccer kicks and stomps are hard on athletes. I appreciate that for the legitimacy of this sport, they had to be swept under the rug. The problem is that knees to the head of a grounded opponent went with them, and that is a tragedy. Knees to the head of a downed opponent aren't as powerful or dangerous as stomps and soccer kicks, but they do make smothering top players so much more interesting to watch.

The current state of the MMA rule set has made a number of positions which should be at the top of the positional hierarchy almost completely impotent. For a start, there is the north-south position. Most crowds have a good chuckle when a fight progresses to here—and to be fair, so do I. But “balls on your head” is a lot less scary than wound up knee strikes that you can't do anything about.

I'd like to use some gifs of Shogun working from the north-south position, but to be honest his opponents freaked out as soon as he started to transition there and he rarely got to it. Mark Coleman, on the other hand, was a strong enough wrestler to do whatever the hell he wanted. Here's Coleman finishing off the great Igor Vovchanchyn. This wasn't a TKO, Vovchanchyn couldn't get out and was eating knees, so he tapped out.

Can you imagine Georges St. Pierre working from north south? Hell, even Jon Fitch could be made more exciting with them. Alistair Overeem crushed plenty of guys with knees to the head from side control in PRIDE. The current situation is that fighters use both their arms to hold position, and are terrified to make space to strike. Allowing the use of knees rewards dominant positionand removes much of the reason to stall.

Finally, the front headlock should be the most dangerous position in mixed martial arts. We don't have much wrestling in England, but if I ever end up in a fight for my life, the front headlock is something I want to have in my back pocket. Even without submissions or knees, dragging someone's head along the pavement will do more than enough damage.

Not only are a great many grapplers absolute killers from there with D'arces, anacondas, guillotines, transitions to the crucifix, grobbits, and Peruvian and Japanese neckties, it should be the greatest knee striking position of all. But because fighters are allowed to put one hand to the mat and make knees illegal, the guy with the front headlock is left awkwardly trying to pick his opponent up and land awkward knees from a standing front headlock. The position is almost completely impotent.

Most of the time that turns into thigh meat rubbing on the victim's face, simply because of the angles involved.  Cat Zingano is the front headlock goddess, and manages to actually land well with the knee on her strikes from the front headlock... but I still feel like a largely pointless rule is holding her back.

No matter where you stand on stomps and soccer kicks, you can't tell me that the UFC wouldn't be a more interesting place if folks were still allowed to go full Coleman.