Being Big John: My Attempt at Refereeing an MMA Bout 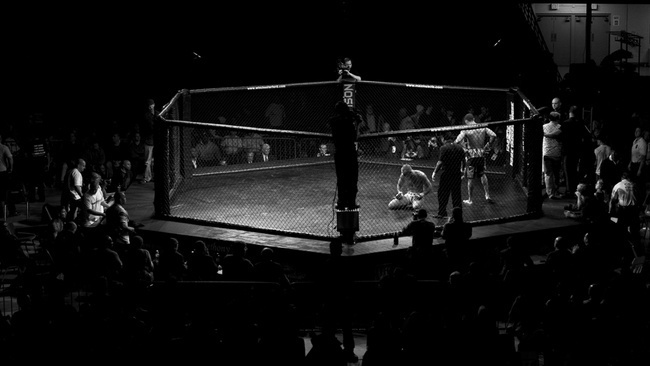 “You’ll make a great ref for the heavyweights, you’re like a girlfriend with small hands, they’ll look huge!” the promoter said of my 135-pound frame.

“I don’t know about this,” I thought to myself, one of those instincts that are almost always right and this time proved no different.

It seems that MMA fans don’t realize that refereeing is possibly the hardest job in the world. They are responsible for the safety of the fighters, appeasing the audience, and upholding the law. They are also the first to be criticized.

As an avid fan of MMA myself, I understand the criticism. An early stoppage robs the fight of the potential to have a memorable comeback. If it’s your hometown fighter or somebody you know, their loss feels like yours. When the referee stops the fight, you rapidly pass through the five stages of grief; the first being denial – blame the referee. The second one, anger, is usually expressed on message boards.

As a Coach, the referee is a serious consideration for the safety of our fighter. The reality is that there are truly poor referees out there. There are certain events I will not let my fighters participate in due to the organization that covers it. I’ve had referees restart the fight standing after a tap out, I’ve had them make decisions at the pressure of a promoter who is cornering a fighter and much worse. If a referee is poorly trained or weak willed, it is genuinely dangerous for my athlete.

So I felt like I owed it to the fraternity of MMA law keepers to jump in headfirst, and see how it is to walk in their shoes. Something my dearest mother refers to as “exposure therapy for the empathically challenged.”

My first lesson in referee-empathy came as a teenager, when I decided to make some money on the weekends. I enrolled in the referee course, thought to myself  “Hey, why do I need to study? I played and watched soccer my whole life, I know the rules.”  Sound familiar MMA fans?

So on my fourth sad attempt, the adjudicator felt sorry for me and gave me a pass. I collected my uniform, grabbed my flags, and went to the field to collect my first paycheck. FIFA here I come.

Needless to say it was a steep learning curve. A few lessons I learned very quickly:

1. You are never right. Particularly when you are right.
2. Don’t underestimate the parents and coach’s skills at manipulation.
3. It’s genuinely hard to concentrate for longer than a few minutes.
4. People judge you on your confidence, so stick by your crappy decision.
5. Tides of a game turn quicker than you can react.
6. People get hurt if you don’t make the right decision.

I lasted one season, mainly for the brownies that the soccer moms would bribe me with. And that was that for my career as a soccer referee, sorry FIFA, you were robbed one of the greats.

When I got the call to referee an MMA event, you can imagine I approached it with much trepidation, but I felt I owed it to the sport. Plus the thought of one day sharing a uniform with Big John McCarthy was jet fuel for my fragile ego. UFC here I come.

My career started differently than how I imagined. On the way to the event one of the fighters attempted to butter me up. Impartial me I thought, how dare he. This fighters approach was to play on my grappling instincts. He was fighting a formidable striker that looked like he had stuffed walnuts under his deltoids.  As the grappler, knew he needed as much time on the ground as possible so he buttered me up with talk of past referee mistakes and the rewards of a pro-grappling bias.

Asit turns out, bad sportsmanship has an equilibrium. His opponent had similar plans, albeit less subtle. “Hi ref, I’d like to fraternize with you a little, you see I don’t really like my opponent. So, if you could step in a little late so I could punish him, that would be great.”I informed him that “I probably won’t be doing that,”which was met with a wink, a smile and a pat on the shoulder. His charming 220+ frame, tattoos and mohawk added more than a little weight to his suggestion.

As a professional referee, I decided my time would be best spent in my room, clinging to my remaining dignity. The big night finally came and my first few fights were uneventful. As an ex- fighter it was fairly easy to predict the outcome before it occurred, so I could safely and timely step in. I was on my way to the UFC and quite impressed with myself too; Big John, meet Little John.

The gods of empathy soon shined on me and the show really kicked off. During one scuffle, the fighter was knocked out cold on the ropes. I immediately saw the roll of his eyes, the flash of white, so I dove in. I clinched the opponent but not before he fired off one shot, waking up his unconscious victim. Said victim tried to continue the brawl, but I stood fast between them, calling off the fight.

Both corners exploded; “Let it go!”, “Let them fight!” The crowd started booing. If I was going to be a UFC referee, I was going to need to trust my instincts, so I waved it off.

The promoter tapped me on the foot.

“What are you waiting for…restart it, it was early.”

Now this can’t happen today, because the referee is independent of the promoter, but back then in the early days of MMA, there was no such separation.

I argued briefly, but in the end I worked for the promoter. My gut was churning, but I let it go and after a few brief exchanges, the same guy was knocked unconscious again. I waved it off and looked at the promoter, just incase he wanted to let the victor continue to attack his foe to appease the audience. No? He was satisfied this time and I declared the victor. His victim left on his own accord, thanking me for his coffee on the way out of the ring.

It was time for the heavyweights, and I have to admit I was nervous after my last ordeal.

The match almost came to blows at the handshake; but luckily they overestimated my authority and behaved. They stepped back and I uttered my cheap knock off of Big John “Let’s make rain!”… I wish. I mumbled something like “Let’s make it happen,” and waived my tiny paw in the middle.

The trucks collided and immediately the grappler pushed it into the corner. The striker knew he was in danger and delivered an illegal elbow to the kidney. I warned him, knowing he would want a break from the position, but not giving it to him. 1-0 Mr.Fraternizing Grappler.When Mr. Striker discovered that he hadn’t studied enough grappling, he proceeded to plough three more rapid-fire, illegal, elbows into his opponent’s kidney. I quickly dove in, separating the fighters and sent the striker to his corner.

The grappler was still paralyzed on the ground when his opponent brought over a cheese burger and laid it next to him, surely as a sign of respect. I went to disqualify him only to have him pull his hand away from me and raise it in victory. His corner joined him, celebrating victory. When I began to inform them of my decision, it was implied that I would not be changing my decision or harm may come in my general direction.

I turned to the promoter for help and he shrugged, told me to declare it a victory so we can leave in one-piece. I declared it a victory and then left the ring for the last time, Little John no more.

Ever since that trying night, my respect for our referees has grown immensely. They are underpaid, underutilized, and over scrutinized. Despite this, they all seem to love their jobs and genuinely seem to always try their hardest. It is a terrifying, lonely, and sometimes dull job, but it’s also incredibly rewarding. When you are there, your eyes and ears open, your senses become alive, it stays with you for days after. Simply put, it’s the best seat in the house.

It also occurred to me that one of the enduring problems of MMA refereeing is their lack of experience in actual combat. Now I am not implying that they need to be a professional athlete, but a solid grappling background should be an absolute must. In Australia, our best referees have a serious grappling background, which allows them to better understand a large portion of the game. It also provides some foresight, which helps them to better protect the fighters.

So next time you are watching a UFC event and the referee makes a decision that angers you, ask yourself “Is the fighter’s safety less important than my lust for action?” Ask yourself how you would have acted. Better yet, rather than pointing the finger, why not approach your local combat sports commission, enroll and make a difference?