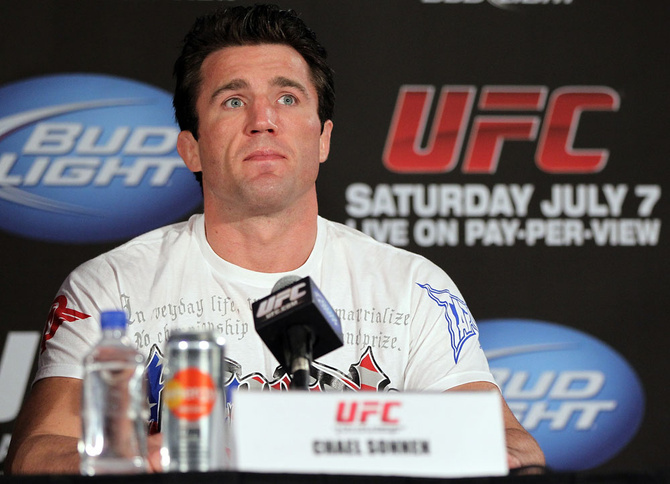 We just watched this video of UFC satirist and court jester (and even occasional two-division championship contender) Chael Sonnen peddling fake instructional videos for his fake Truth Talking Academy, and if there was any doubt before that Sonnen is the premier athlete-comedian of his generation (a Muhammad Ali for the age of irony), there should be no doubt now:

Sonnen's only competition for that title is NBA power forwards Blake Griffin and Kevin Love, who came up with this brilliant gem selling their services as underemployed workers during the 2011 NBA lockout:

We can argue all day which video is funnier -- Sonnen's SNL-style commercial parody approach or Griffin and Love's next-generation, post-Tim and Eric absurdity -- but there's no doubting which video runs deeper. Griffin and Love's parody is gentle and good-natured -- they make fun of themselves for being wildly overpaid commodities whose talents don't extend beyond the basketball court and who have no idea how much such talents are actually worth ($9 million and 99 cents is their "low price" for around-the-house chores), but their mockery is broad -- it takes in all American professional athletes, or really anyone making ridiculous amounts of money.

15 years into his MMA career, Sonnen has managed to carve out a weird, fluid space for himself and his alter-ego where arrogance and self-deprecation can co-exist, where the guy who punches people (and gets punched by people) for a living is the smartest guy in the room, where self-promotion is both a career strategy and an art unto itself. With his ever-increasing army of funhouse mirrors and experiments in post-modern self-reflexitivty, Chael Sonnen is not-so quietly becoming the Charlie Kaufman of professional fighting.