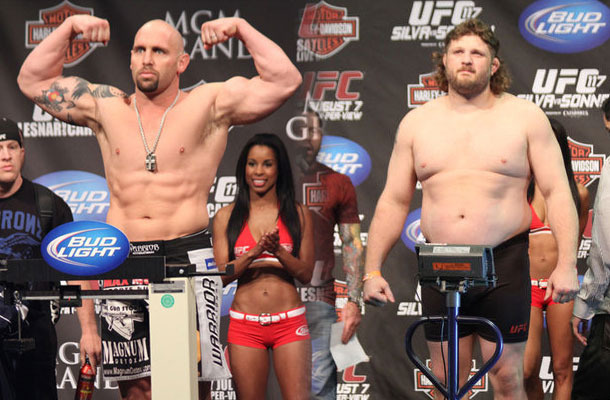 If UFC President Dana White is to be believed, there’s no fate in this world worse for the enterprising and ambitious MMA fighter than allowing a fight to go to a decision. “Don’t leave it in the hands of the judges” is one of those MMA truisms so universally acknowledged and accepted (and repeated) that it’s taken on the air and language of a commandment: Thou shalt not leave it in the hands of the judges. As the theory goes (and most of the time the theory is even right), there are too many ways for an MMA judge to misapprehend the goings-on of any particular fight – too many subtleties, too much subjectivity, too many attempts to quantify bizarre metaphysical notions like “Octagon control” and “Aggression” – to guarantee that a man who dominated his opponent for three rounds but was unable to put him away will win. In other words, it’s always the fighter’s fault if he loses by decision; if he had been tougher or smarter or craftier or merely better, his opponent would be knocked out or choked out and there would be no need for debate. And so the fear of leaving a fight in the hands of the judges should haunt MMA fighters like specters from a fever nightmare long remembered from childhood.

No fighter is more consumed with the fear of the unfinished fight than the fighter on the verge of breaking into the UFC. On the reality television show The Ultimate Fighter, which is coming to the end of its 16th season, 32 of those fighters compete for one UFC contract, any MMA fighter’s Holy Grail. On this season’s premiere episode those 32 were quickly whittled down to 16 (who then moved into a house together for six weeks of training and assorted, now compulsory, bad behavior) through a series of elimination fights, each fighter entering the Octagon with the poetic exhortation of their longed-for boss, Mr. White, ringing in their ears: “Do not leave the future of your fucking life in the hands of these judges. Finish it.” There are some in the world of mixed martial arts who question that approach, who believe winning is more important than how you win, who say always looking for a finish can leave fighters vulnerable, both to losing and to injuries, but since White is the final arbiter of who stays in the UFC and who goes, their opinions don’t count for much. “It’s not just about winning,” White tells the camera. “It’s about winning impressively.”

Agree with White or not, it’s hard to argue against the idea that even such a questionable philosophy (from a strategic standpoint if not a moral one) spoken with conviction and enthusiasm beats any of the alternatives offered on season 16 of The Ultimate Fighter: on the one hand, the empty and hoary fighters’ platitudes muttered by the contestants; on the other, the total silence coming from this season’s two coaches: heavyweight contenders Roy “Big Country” Nelson and Shane Carwin. The young guys can’t help themselves; they don’t want to ruffle any feathers, and it’s like they’ve been given a script to memorize: “I’m fighting for my family,” “This is my time,” “I was born to fight.” Nelson and Carwin, however -- you’d think they would have learned something after years of working for White: mainly that on television, personality is as valuable as achievement and silence is the loudest sound in the world. It’s the sound of thousands of thumbs pressing remote control buttons at the same time, changing the channel.

White may be a carnival barker and a bully, but listening to him curse and cajole his way through color commentary of the 16 fights last Sunday, while Carwin and Nelson kept a monastic silence, I couldn’t help but be reminded of Abraham Lincoln’s response to criticism from his advisors during the Civil War that Ulysses S. Grant was an untrustworthy drunk who shouldn’t be given authority over the Union army. That may be true, Lincoln responded, “But he fights!” White may or may not be right, but he speaks!

There may be an argument to be made that Dana White isn't entirely attuned to the mentality of average fighters, men and women who, by tradition, are taciturn, even mistrustful of words. After all, White is a promoter, and words are the tools of the promoter's trade. And there are plenty of people—fans, fighters, trainers, writers—who have argued that White's insistence on finishes and flair betrays an ignorance about what it’s actually like to fight in a cage. But one thing White does understand is the modern sporting landscape, which saves its greatest rewards for something outside victory and promotes the idea that the worst fate for an athlete isn’t defeat; it’s not being noticed. At one point in the first episode of the latest season of his first great marketing masterstroke, White exhorts the 32 aspirants standing before him with all the fervor and religious conviction of a priest addressing his wayward flock not to give into the temptation of anonymous victory: “You don’t want to be the guy that nobody remembers,” he tells them. In 2012, being forgettable may be the deadliest sin of all.