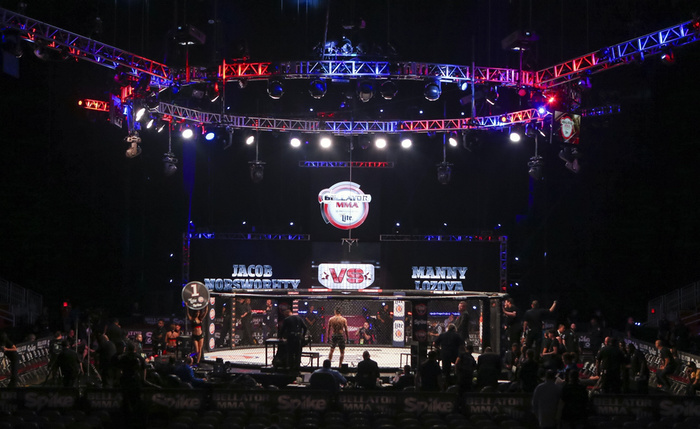 Dada 5000 and Kimbo Slice grabbed the majority of the headlines from Friday night’s Bellator 149, but writers were definitely not praising their co-main event clash.

The street fighters turned MMA fighters looked completely out on their feet midway through the first round of the fight. The widely anticipated early knockout never came, and when it still hadn’t come midway through the second round, the bout was beyond saving.

They threw their slow, heavy hands at each other, but barely made contact. In round three, a big right made caught Dada 5000. The blow forced the protagonist of ‘Dawg Fight’ (and potentially ‘Dawg Fight 2’) to stumble across the canvas where he eventually collapsed. Kimbo held himself aloft against the fence after bringing the bout to its conclusion, only raising his hand in victory when referee John McCarthy grabbed the limb and lifted it for him.

The bout was widely considered a bastardization of MMA. Despite the fact that the two men in the co-main event meeting are not life-long MMA fighters, there was still a certain level of expectancy riding on the bout, which was never met.

In what was one of the most bizarre revelations from the night, Luke Thomas and Shaun Al-Shatti explained how there was rapturous laughter from both fans and media members on press row as the infamous bout took place.

“The laughter in the arena was the most I ever heard,” Al-Shatti told Thomas in their post-fight show for MMAFighting.com. “It was the weirdest reaction to a fight I have ever seen live. It was genuine laughter in the arena. You could hear it, it was audible and loud, (and it was) because of what we were seeing.”

Bellator 149 was the first event the promotion had put on since their lucrative signing of Benson Henderson. The former WEC and UFC champion’s signing with Bellator was one of the great landmarks of the company. Managing to grasp a one of the top prospects over two of the UFC’s divisions was a massive sign of intention from the company. Henderson’s bravery to opt for free agency was rewarded with a contract from Bellator, and it was assumed that many would follow suit.

Bellator’s president Scott Coker definitely believed Henderson's move would prompt others to follow his lead based on his appearance on The MMA Hour two days after they obtained the ‘Smooth’ one.

He continued: “By the end of this year, I think we’re gonna have a really good roster on our hands and some really big fights ahead of us.”

“All these free agents that are out there aren’t just testing free agency just to test it. I think there are other fighters out there that we’ll get.”

You can’t help think that Friday night’s event might sway some fighters away from aligning themselves with Bellator. Their reliance on freak shows to headline their events has probably reached a saturation point with the laughter that coincided with the co-main event on Friday night.

To make matters worse, after Dada 5000’s loss and subsequent hospitalization, 49-year-old Royce Gracie and 52-year-old Ken Shamrock made their way to the stage to engage each other for the event’s headline billing. Again, after a knee to the meat and two veg and then one to the face of Shamrock, the main event finish left a want in the audience despite the obviously entertaining co-main event.

That being said, Bellator’s insistence on giving top billing to “freakshow” fights does make sense to some extent. They are chasing numbers and Friday night’s event at the Toyota Center is likely to have brought plenty of eyeballs to their brand. However, it is unlikely that they want their product to be mentioned in the same breath as Kimbo versus Dada, which took some giant steps back in terms of the technical aspect of the sport.

UFC won back some ground in the era of free agency be reclaiming the services of top heavyweight Alistair Overeem and surging bantamweight Aljamain Sterling earlier this month. Sterling announced his resigning on The MMA Hour and explained the importance of the UFC brand in his eventual decision.

“Ultimately, there are a bunch of things that go into it. The marketing, the publicity and of course, you can’t really put a value on the UFC name,” he told Helwani.

“That alone has value in itself where, if you go and tell people you fight for the UFC people know exactly what that is. Ultimately, I think I made the right decision, I have some extra incentives in there, so I’m happy with the decision I made.”

Although it appeared that Sterling was simply praising his employers at the time, he made a very valid point. Indeed, “you can’t really put a value on the UFC name”, and after Bellator’s showing on Friday night, the UFC name will look more prestigious than ever.