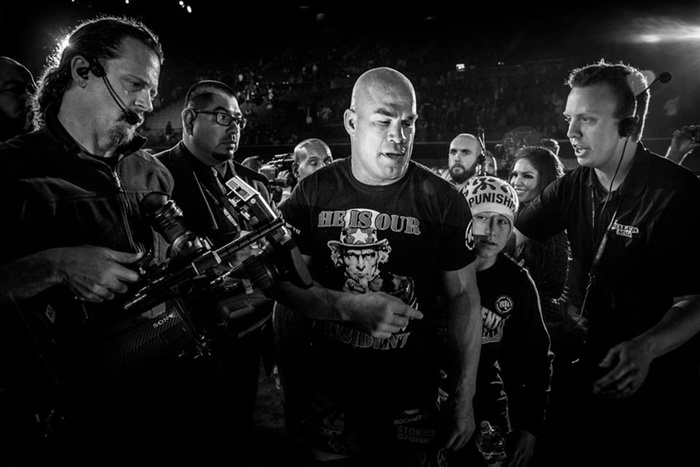 Tito Ortiz got the fairytale victory that most were hoping BJ Penn could muster last weekend. At Bellator 170 the light heavyweight legend turned back the clock to manhandle Chael Sonnen. Of course Sonnen is a middleweight returning from three years of inactivity, but you have to take the happy endings where you can get them in this sport.  Unfortunately, however, another Bellator event with a few decent bouts has been overshadowed by talk of a fishy finish. Ortiz choked Sonnen until his face turned purple, but the fishy part for most was that Sonnen seemed to do nothing from the moment that Ortiz got his back. One-dimensional wrestler or not, Sonnen knows the importance of controlling his opponents hands when they take his back.

But it doesn't matter either way. Ortiz got his big send off and through his brilliant pre-fight work, Sonnen got the people to actually watch. Many who are calling shenanigans are overlooking the fact that awkward looking fights are just part of having this informal “legends division” at the top of cards. Fourty-year-old fighters and men returning from lengthy hiatuses do not look the same as the twenty-year-olds headlining UFC cards. In fact, pretty much every main event booked in this legends division has been pretty disappointing so far.

With that out of the way, however, there was plenty of exciting action elsewhere on the card. Chinzo Machida rallied from difficulties on the ground to knock out his man in the third round. But throughout the fight Machida's work on the feet looked terrifically sharp. Focusing entirely on his opponent's centerline, Machida works with front snap kicks and right straights into the solar plexus, and a snappy jab to the face. Certainly Chinzo seems to have the venom that Lyoto was so often accused of lacking early on in his career. The big loopy uppercut from last time made a couple of appearances—in fact Chinzo throws it from so low that it actually got jammed by kicks on two occasions. And the wheel kick which Machida attempts in most of his fights but doesn't seem to have down to an art yet, in this bout it saw him dragged into a grappling exchange.

Machida's opponent, Jamar Ocampo was far from a top talent. He had just a 2-0 record but had submitted his other two opponents, and looked to be giving Chinzo trouble on the ground. As we noted in our piece earlier this week, The Other Machida, it is unlikely that Chinzo Machida will develop into anything special as a mixed martial artist as he fast approaches forty, but his performances do give an interesting insight into a very high level of ability in a style of striking which is rarely seen applied well in this sport. Ocampo fought southpaw for a good portion of the fight meaning that Machida abandoned his lead leg front kick in favor of the rear leg front kick, and connected stepping rights off it on a couple of occasions.

You got the usual Machida 101: back tracking and drawing the opponent forward, only to step in and intercept with the reverse punch.

And Machida used right hands to the midsection, which could only be described as 'very karate'...

Which served to add believability to the old look-low, kick-high.

The same hand trap we looked at half a dozen examples of in our previous article—peeling Ocampo's right hand away so that it could not possibly obstruct the path of Machida's right.

Yet in this performance Machida was also routinely taken down. Sometimes along the fence, but often with long, diving, low singles. This is a strange one because no fighter at the top level of the game dives repeatedly after low single legs, in fact barely any top fighters shoot them with any regularity, but it was not a great sign for Machida's future that he struggled so much with such telegraphed and repetitive takedown attempts.  But it's hard to believe anyone is watching Machida in hopes of seeing him win a Bellator title, most are watching because he is entertaining, a high level striker and a cracking finisher. This makes it even stranger that Bellator—who promoted a fighter with a 1-1 professional record (1-6 amateur record) as the co-main event on their last event—chooses to hide Machida on the undercard, in front of half a crowd.

Derek Campos and Derek Anderson had themselves an entertaining scrap to open the main card. The two went after each other early, threw hard and often, and swung to the closing bell. In a peculiar twist, Derek Campos—whose most high profile victory against Melvin Guillard came as a direct result of a cheeky 'nodder'—found himself being nutted from below by the much taller Anderson at several points in the bout.

Hisaki Kato and Ralek Gracie had the slowest fight of the year so far. Kato couldn't strike effectively against Gracie, and Gracie could not grapple effectively against Kato. Even from full mount, late in the fight, Gracie was stalled out by a grip around the waist. The sole entertaining part of the bout was Kato's cornerman doing his best impression of Mickey from Rocky.

The highlight of the night for most was the terrifying finish to the co-main event bout between Paul Daley and Brennan Ward. Ward did decently with his hands, especially given how hittable he had looked just a couple of performances ago. A couple of decent takedown attempts got Daley to the ground, but Daley has been getting much better at fighting his way up over the years. As the two came out of a clinch Daley surprised everyone with a spinning elbow which stunned Ward. In a beat this was followed by the Groenhart knee right up the center which starched Ward outright. Daley, thankfully, immediately recognized that his man was done and did nothing to follow up on the prone Ward.

A final eye-catcher this weekend came from Giga Chikadze who stopped the formidable and experienced Nak Muay, Victor Pinto on the Glory kickboxing card. Chikadze's first decent blow came in the Errol Zimmerman special, the right knee into the swinging right hook. Chikadze went full Kyokushin and dropped an axe kick on his man as a follow up.

Then Chikadze scored a body kick out of the southpaw stance, set up by a high kick. Pinto went to catch the second kick but the force still found his liver and he immediately collapsed in agony.

Chikadze is an interesting scrapper. A Kyokushin karateka, he kicks well out of both stances and is tough as nails.

Most impressively in his five Glory victories, Chikadze has stopped three of his opponents with the same left kick to the liver.

There were some stinkers on the Bellator card and on the Glory one, but overall the good outweighed the bad and it was a solid weekend of fights. Next weekend we have both a UFC card and Bellator 171 to look forward to.

Modern MMA Was Made In the Image of Tito Ortiz