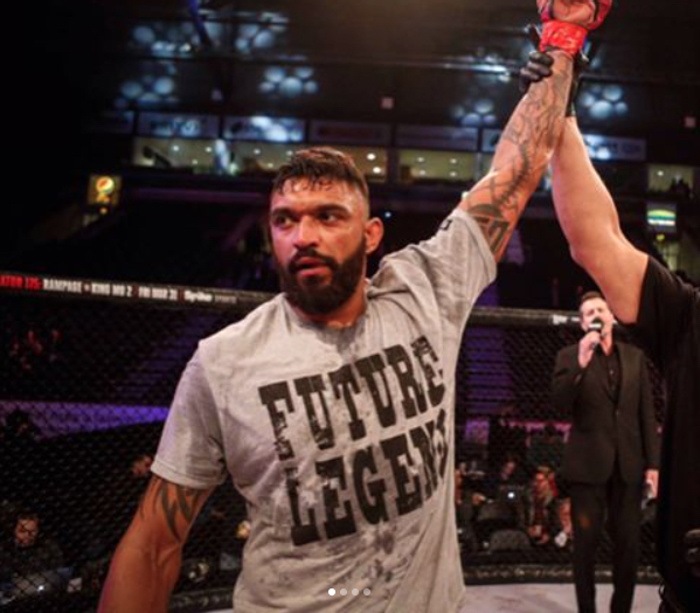 It was a slow weekend in the fight world. Bellator put on a four fight card in Belfast and Glory 38 contained few of the company's big name performers, but that doesn't mean there wasn't fun to be had or lessons to be learned. The most glaring example came in Bellator's main event between Liam McGeary and his second last minute replacement opponent, Brett McDermott. McGeary was due a tune up but a couple of late opponent changes made that a little more dangerous, and early in the first round McGeary found himself on the seat of his pants after eating a stiff left from McDermott.

McGeary rebounded to win the fight, jabbing McDermott up, dropping him with a knee, and seeing the fight waved off by the doctor after mushing McDermott's face up a bit. The 6'6” McGeary's jab made the difference in the bout but was also the element of his game that got him into trouble. The old saying goes 'don't hook with a hooker,' but you will often hear coaches talk about jabbing with a jabber. This is because many top jabbers use their lead so frequently and comfortably—and often rely on a natural speed and range advantage—that their rear hand can start drifting. In fact the way that many gyms teach a fighter to jab, with his right fist pinned to his right jawline, can sometimes play into this. Classical jabbing form, from the days of small gloves and one punch at a time, is to keep the non-jabbing hand up and open to catch the opponent's jab in the palm should he throw a jab at the same time.

Eddie Futch picked up on Muhammad Ali's wandering rear hand when he jabbed and trained Kenny Norton to jab with Ali. It might seem daft to meet a great jabber in their own domain, but if they set the timing by stepping in without feinting well first, and their rear hand isn't active and awake, it is simply attacking them in a moment of predictable defencelessness. Did McDermott recognize this weakness? It seems unlikely, after knocking McGeary down as the two traded jabs, he didn't seem to jab with McGeary on any other occasion and simply ate long lefts up until the finish.

Another interesting technical matter which raised its head was the absence of a technical stand up. Keen to get back on his feet after an embarrassing knockdown, McGeary put both hands to the floor and started standing up with both feet underneath him, his head unprotected and his body square on to McDermott, before McDermott moved in on him and McGeary leapt back to the mat while midway through his return to the feet. The classical technical stand up is far from perfect—plenty of fighters have been timed with a hook or a high kick as their posting hand is caught between the floor and their guard—but that takes some savvy to do. Trying to stand up naturally in the manner McGeary attempted leaves the fighter completely exposed and with his feet level, in no position to either strike or wrestle until he has stepped out into his stance again. McGeary regained his composure, however, and returned to his feet by standing up in base in the traditional manner shortly afterwards.

The rest of the fight was a textbook example of all the things a taller man should be doing. Jabbing his man up and hitting him with knees any time they end up inside of his jabbing range.

This seemed like a waste of McGeary's time, but he was the big name on the card and it was good of him to stay in when he had such bad luck in losing two opponents. There is an expectation from fans that a fighter should just take whoever steps in at the last minute, but it is rarely the smartest decision to even fight an unranked nobody if you have been preparing for someone entirely different, and so should be applauded as a ballsy move when it happens.

It seemed as though Bellator's Belfast card was about tune ups and warm ups, though it didn't all go as expected. 4-0 SBG Ireland prospect Sinead Kavanagh was held down by 1-1 Iony Razafiarison, returning to action for the first time since 2015, in a largely uneventful bout. SBG Ireland's James Gallagher was able to best his opponent Kirill Medvedovsky as he was supposed to. Both Kavanagh and Gallagher showed very long, bladed stances in their bouts—while Gallagher's linear movement benefitted from it, Kavanagh's stance seemed more to inhibit her ability to throw her right hand or fight off takedowns. Gallagher landed nothing of real note but looked economical and fast on the feet compared to his opponent and continued to show the marks of a real prospect. We can only hope that we aren't still talking about how promising he looks in four years time as Scott Coker has been known to test his prospects painfully slowly.

Alex Lohore and Colin Fletcher had an interesting little bout where the grappling wasn't perhaps the highest level you will see in MMA, but Fletcher was constantly attempting chokes from even the most disadvantageous positions.

Perhaps the most exciting fight of the weekend was the wild and wooly brawl between Dutch kickboxer, Murthel Groenhart and Thai Nak Muay, Thongchai. The bout was a reminder of the issues that kickboxing will always have: while limiting the clinch means more knockouts and more fan friendly action, it also limits a lot of nice knee strikes. If you allow some of the clinch, you end up with a lot of grey areas and enforcing it differently from fight to fight. K-1 went from banning holding and hitting, to allowing one knee with a double collar tie, to only permitting knees with one hand behind the head. Glory has gone through multiple attitudes towards the clinch—at Glory 8 the referees were actually giving Yoshihiro Sato a three count out loud each time he performed a stepping knee into the clinch. At Glory 38 we were in this unfortunate spot where the first strike from a clinch was legal, and if Groenhart couldn't stop Thongchai from throwing a second, that strike was illegal. A shame because the two were not always in a tie up, slowing the action, and so the crowd would have benefitted from the fighters going until the two fell into a more static clinch.

This one got both men a telling off for holding, a damn shame.

Thongchai's knees were his best weapon throughout, and soon became his only weapon.

Groenhart's best work came with his right hand as he attempted to loop in hooks and straights while circling out to the right.

Thongchai's behaviour changed as he sought the stepping knees more and more intensely. His hands, instead of checking Groenhart's, were simply reaching out ahead of him. He ate straights and hooks, and Groenhart swung wild.

Then end came in the third round as Groenhart poured it on in proper combinations against a considerably less mobile Thongchai, tripling and even quadrupling up on the left hook to knock him down.

After taking a standing eight count, Thongchai blocked the expected Groenhart flying knee, but was decked by a flurry of left hooks again.

A wild, ugly fight but amid such a slow weekend it was just what the doctor ordered.