Ben Rothwell: Birth of a Contender 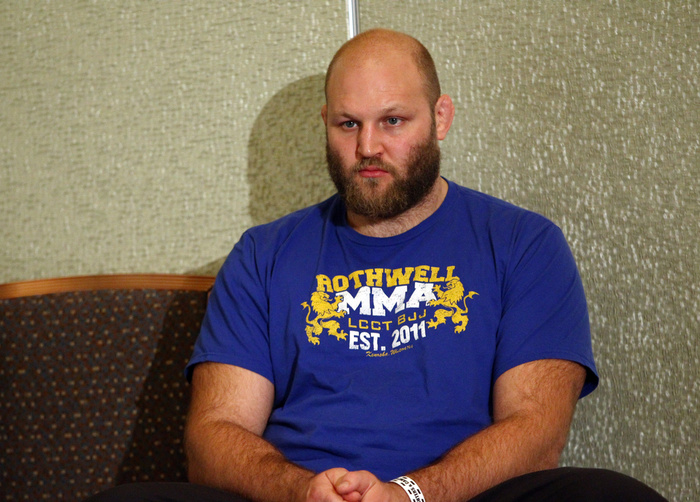 The heavyweight division is consistently the most disappointing in MMA. Nine out of ten fights at heavyweight devolve into clumsy swinging matches with both competitors gassing out if it goes past three minutes. The heavyweights are where the finishes happen, which is why fans supposedly love the division, but half of these come because a ludicrous amount of heavyweights come in lacking the conditioning to go anywhere near the full fifteen minutes. Add to that the natural hitting power of the heavies and it's hard to find a man who can win fights at heavyweight with any consistency.

In the late stages of 2015, Ben Rothwell emerged as a surprise contender for the heavyweight belt. Starching Alistair Overeem and tapping out Matt Mitrione, Rothwell was suddenly taking on legitimate, skilled heavyweights and dusting them with little trouble. When Rothwell was booked in to fight Stipe Miocic at UFC Fight Night 76 in October it looked as though he was just one step away from a shot at the heavyweight title. But when Miocic suffered an injury the fight was cancelled and Rothwell was left without an opponent. Suddenly Miocic was booked into a title eliminator against Andrei Arlovksi and it seemed as though he had been rewarded for dropping out of the Rothwell bout. Even worse, between my beginning this article and publishing it Cain Velasquez has once again pulled out of a fight and now Miocic is fighting Fabricio Werdum for the title. Put yourself in Rothwell's shoes and it must be maddening.

The change in Rothwell has been gradual but pleasant to watch. There was no overnight revolution  in his ability and the things which were getting him by are still doing so. Rothwell has taken steps to improve himself not by becoming a textbook fighter but by finding ways to make his best methods a little more reliable and little less dangerous. This goes back to what I used to write about Fedor Emelianenko's long hooks and weird looking kicks: 'technique' is just a method to improve your rate of success, it's not a one-size-fits-all thing. If you can improve your rate of landing blows and eat less blows in return you have improved your method. Equally I have seen hundreds of fighters make their form tighter on their fundamentals and have less success than before.

Following a rough UFC debut against soon to be champion, Cain Velasquez in which Ben Rothwell was stopped with blows while held against the fence (the bout which saw Dana White dub Steve Mazagatti 'the worst referee in the history of combat sports'), Rothwell found himself in a streak of so-so fights with mixed results. He decisioned Gilbert Yvel, got lit up and struggled to take down Mark Hunt in a decision loss, and KO'd Brendan Schaub while reeling from blows. Rothwell met a resurgent Gabriel Gonzaga in 2013 and looked decent in fighting off the Brazilian man mountain's attempts to keep him on the mat. What killed Rothwell's chances in that fight was the right straight of Gonzaga. Rothwell repeatedly switched stances, with his hands down by his nipples, and ate straight punches up the center which stunned him.

Against Brandon Vera it seemed to be more of the same. Rothwell would get hit with straight blows and body kicks as he moved Vera towards the fence, and then Rothwell would flurry and the majority of the time Vera would get away. Until the third round when Rothwell began erratically dancing, rushed Vera, and caught him in a flurry.

If a fighter is the bigger hitter and has a sturdy chin a one-for-one trade is completely acceptable. There have been plenty of fighters who aim to create trades rather than to land their own shots and get away. What is not good is trading one for half a dozen en route to the exchange. That is what Rothwell was doing for a while, it took him so long to get close enough to land his shot, and his defensive abilities (or perhaps considerations) were so slack that he would find himself trailing enormously in effective work done.

When Rothwell found himself in a match against Alistair Overeem it seemed as though the fight was booked as a tune up for the Dutchman. Overeem was technically slicker in every area of the game and yet watching the bout one felt like Rothwell was comfortable and Overeem was in peril throughout. Rather than by his nips, Rothwell's hands were up and palm out, creating that window which George Foreman and Sandy Saddler used to deny strikes. It's not textbook boxing but for a slower moving, aggressive fighter this method works a treat. Rather than getting skewered by straights through the guard, it allows a fighter to easily parry strikes well ahead of their target by forcing the opponent to fire 'through the window'. If the goal is to get in close enough to swing without taking too many blows, this is a great way to accomplish it. We spoke about this last week in George Foreman: Student of the Greats, obstructing the line of the fastest, straightest blows forces the opponent to swing around and these are far easier to see coming.

George Foreman occupying the line of Ted Gullick's jab and applying his own.

Gullick tries to swing around Foreman's hands, but it is slower, expected and easy to see coming.

Each time Overeem stepped in to swing there was a good chance his punches would be deflected by one of Rothwell's forearms or palms, and then he would be in a trade with Rothwell which was the one thing he didn't want. After being clipped a few times stepping in, Overeem was finally caught flush by Rothwell's right hand and Rothwell swarmed to pick up the TKO. Easily the biggest win of his career.

Rothwell times a cross counter for the knockdown and finish.

What followed was a match against Matt Mitrione and Rothwell's hands out 'mummy' guard paid dividends again. It is not pretty, and it isn't the controlling, smothering application which Foreman used so effectively, but it creates obstacles and it gives the usually slower Rothwell a leg up on defending blows. Against Mitrione, a fast heavyweight on a streak of three knockout victories, Rothwell looked to be getting hit, but slow motion revealed that his peculiar guard served its purpose and there was almost always something in the way of Mitrione's blows.

A good low kick allowed Rothwell to enter on a flurry and do what he does best, get off a few good blows and force an opponent to cover up. It's no secret that Rothwell does his best work against a ducking opponent—both of his victories over Vera and Overeem came from an overhand connection, his opponent ducking, and Rothwell landing his tremendous uppercuts.

Mitrione rushed a shot on Rothwell, Rothwell fought it off with a whizzer and slapped on a short guillotine to tremendous effect, forcing the submission from Mitrione.

As I said, gradual development. To pretend that Rothwell is completely disciplined now, or that he is defensively brilliant, would be ludicrous. But he can hurt just about anyone in a loose, close range trade and now he has a means to create those without getting hit as frequently and cleanly on the way forwards. The difference in his showings against Gonzaga and Vera, and those against Overeem and Mitrione are tremendous. Slight adjustments result in far less of a literal headache for Rothwell.

This weekend Rothwell meets the brilliant Josh Barnett in a stiff stylistic match up. Rothwell is surprisingly good at getting up off of his back, as Cain Velasquez and Gabriel Gonzaga will attest, but Gonzaga easily pinned him to the fence for long portions of the bout. That is where Barnett has been doing his best work lately, in the classical infighting.

Using his head to stand his man upright against the fence, Barnett denies his opponent a stance to generate power from, and starts working over the body with blows.

Raise the head, expose the body, flatten the stance.

It is a strategy built for the heavyweight division: taking away the punching power and testing the endurance rather than the chin of the opponent. Rothwell clearly isn't UFC brass' favorite—as can be seen in the Miocic debacle—but if he can pull off a win against a man so tailor made to give him trouble as Josh Barnett it will be hard to deny him a crack at the belt.

Arlovski and The Folly of Counting Out Heavyweights