Bethe Correia: Requiem for a Troll 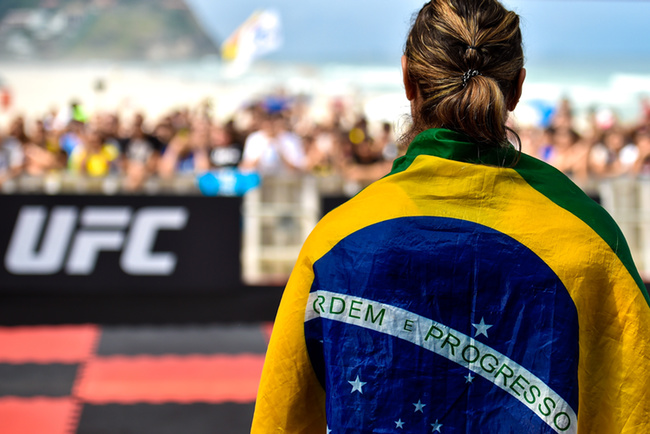 On April 26, 2014, Bethe “Pitbull” Correia officially became an intriguing prospect in the UFC Women’s Bantamweight division with the lowering of one index finger.

Her debut in the UFC the previous December, at UFC Fight Night 33, had been less than auspicious. She tried to spook her opponent, WMMA legend (and former Fightland contributor) Julie Kedzie with an intense staredown at the weigh-ins and got little more than a giggle for her efforts. She won the next night, squeaking by Kedzie in a controversial split decision, but whatever discussion her victory generated was more about the possibly questionable judging than her prowess as a still undefeated fighter.

Her unanimous decision win over Jessamyn Duke at UFC 172 was a more convincing showing, but it was her post-fight performance that officially made her one to watch. Having defeated Duke, one quarter of Ronda Rousey’s Four Horsewomen posse, she turned to the camera and flashed the traditional four-fingered salute. Then she dropped one of those fingers.

It was a simple but clever gesture, one that seemed to prove that Correia could hang with Rousey mentally, if not physically. It meant that she’d recognized what Rousey, Duke, Shayna Baszler, and Marina Shafir—a close-knit group of wrestling fans who lived and trained together—were doing by naming themselves after The Four Horsemen, one of the most famous stables in pro-wrestling history, and responded in kind. When a wrestler wanted a shot at Ric Flair, he had to go through Arn Anderson and company first. Correia wanted Rousey, and so she started with Duke.

In a division that offered little in the way of drama beyond the bad blood between Rousey and Meisha Tate, it was an exciting change of pace. “This was a ‘make no mistake about it, I don’t like you and I don’t like what you stand for’ statement. This was a Chael Sonnen saying that Brazilians play in the mud statement. It was a level of trolling that we haven’t seen yet in the women’s bantamweight division,” Fightland’s own Zach Miller wrote at the time. 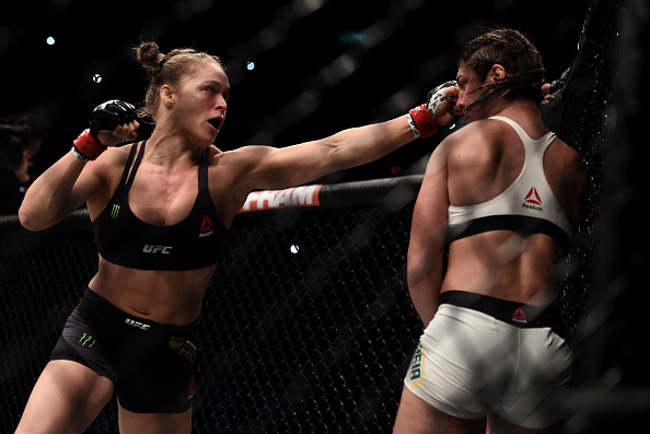 It was enough to earn her a shot at the next Horsewoman in line and on August 30, 2014, Correia, the oddsmaker’s underdog, toppled Shayna Baszler with a series of strikes for a TKO win just under two minutes into the second round. Sure enough, the camera was ready for her when she dropped that second finger and added a little wiggle to the mix. It was playful but pointed, and particularly impressive given that the Brazilian fighter spoke very little English. She was becoming one of the UFC’s most interesting personalities on the strength of non-verbal communication, Sonnen-ing her way toward a title shot with a storyline and a smirk.

Like many, I got sucked in, praising her “endlessly GIF-able fingers and wiggles,” and declaring that “her systematic attack on the Four Horsewomen to get to Ronda Rousey is currently MMA’s most basic narrative, but also its most compelling,” in the October 2014 Ultimate MMA Trash Talking Tournament (where she made it to the semi-finals before losing to Sonnen).

I knew how this would all end—I suspect everyone but Correia did—but I was enjoying the ride. When the winner of a fight is a 99.999 percent foregone conclusion, when it’s no longer a question of if Rousey will defeat someone, but when and how, the story surrounding the match is particularly important. And Bethe’s snotty ascent inspired all sorts of questions. What would she do next? How far would she take her anti-Ronda quest? When would she get her title shot? And how would the champ respond?

But the cracks were already starting to show at that point. The third member of the Four Horsewomen, Marina Shafir, was not in UFC and fought a division above the rest of the gang at Featherweight, which left Correia without an obvious next step. So she took to social media where she alternated between taking her own shots at Rousey and retweeting every pro-Pitbull and anti-Rowdy sentiment she could find. The social push had its moments, like when she “celebrated” Rousey’s 28th birthday was an Instragram post that read “I heard Ronda’s birthday was this week. It will be her last ‘b-day’ as a champion. If the UFC wants, I’ll give her a belated birthday gift in the cage. I’ll be the future champion,” but it was generally more thirsty than threatening. Someone with the trolling skills Correia had demonstrated up until that point was surely capable of something better. 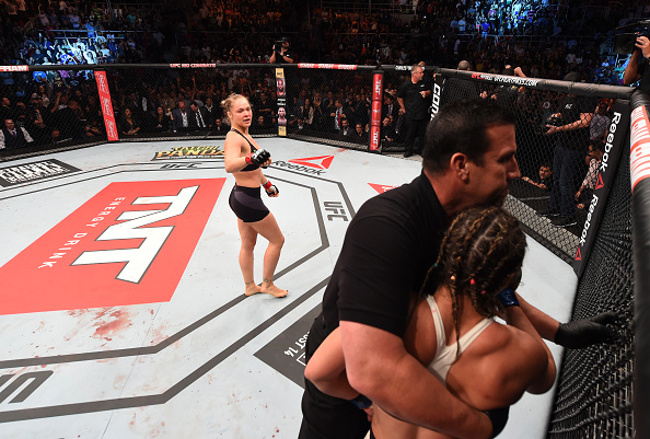 It was still enough to officially earn her a title shot, which was announced this past March, but that was as much a testament to the lack of other viable contenders as it was to her quest. And once she officially got her shot, she seemed to lose whatever cunning and control she had left.

In a now-infamous interview with Combate in May, Correia told the publication that “[Ronda] is not mentally healthy, she needs to take care of herself. She is winning, so everybody is around her cheering her up, but when she realizes she is not everything that she believes she is, I don’t know what might happen. I hope she does not kill herself.”

It was an attack as pitiful and embarrassing as it was offensive. Although she later apologized and claimed that she hadn’t been aware that Rousey’s father had committed suicide when she was a child, but her regret was half-assed and her claim of ignorance was an outright lie, given that she’d just made it clear that she’d read Rousey’s autobiography, which covers the tragic event in detail. She’d doubled down on an unnecessarily cruel shot by making herself look spineless. It was great promotion for her fight, but terrible for her.

“You come at the king, you best not miss,” Omar famously warned on The Wire. Correia should have listened. If you’re going to take on someone with a mental game as notoriously strong as Rousey’s, you can’t just flail around with some below-the-belt emotional haymakers. In the immortal words of Erlich Bachman, she brought piss to a shit fight. She just made Rousey even more interested in beating her. And she made pretty much everyone else want to see it, too.

If this was pro-wrestling in 1984, Bethe would be the perfect heel, and this would be the feud: a villainous foreigner attacking an increasingly popular champ’s family, rallying the entirety of the fandom behind the champ and completing her transformation into a massively popular and dominant babyface. In MMA in 2015, it played out pretty much the same way, just with far worse implications for the heel in question.

Almost everyone wanted Rousey to beat the snot out of Correia on Saturday night and everyone knew she was going to, except for Bethe, who strutted out to the Octagon with a confidence so ridiculously oblivious that it would have been uncomfortable if the audience’s taste for blood and schadenfreude has been any less ravenous. And when Rousey did destroy the Pitbull, in those beautiful 34 seconds of furiously fast hands, the fight became far more meaningful than your average championship match against an outmatched opponent would have been under almost any other circumstances.

Correia made the UFC look good. She made Rousey look even more amazing than before. But she made herself look absolutely terrible. Unless her actual plan was to, in the parlance of pro wrestling, put Rousey over, she failed at whatever she actually has been trying to accomplish since March.

We haven’t seen the last of Pitbull. She will get her chance to climb back up the ranks and earn another shot at the belt. But now that her mental game has been even more exposed than her previously-lauded hands, what are the chances that any of us are going to want to pay attention anymore?

Ronda Rousey and the Punishment of Bethe Correia