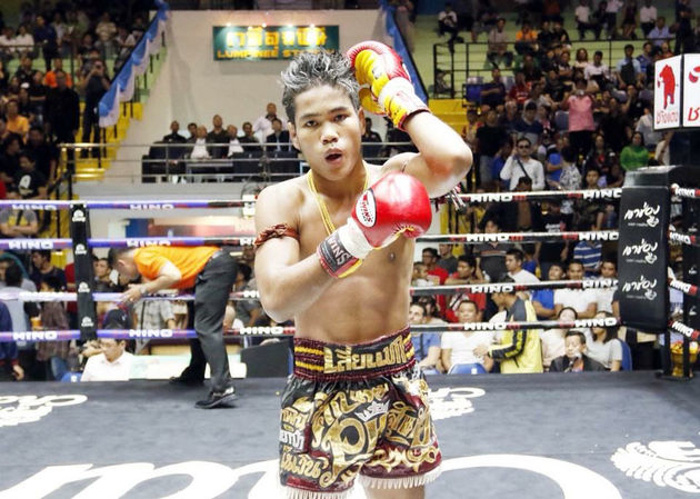 Beware the dark elbows of Muay Thai. And fear too the grim reaper scythe of the man called Thailand, Muangthai “the elbow king” of Bangkok’s professional boxing scene. The super featherweight assassin from Buriram in northeast Thailand was voted Lumpinee Stadium’s boxer of the year and came runner-up in the 2016 Sports Authority of Thailand’s “Fighter of the Year” competition. The double honor is water off a duck’s back for 21-year-old Muangthai—who was previously voted “Fighter of the Year” in 2014 by the Sports Writers Association of Thailand (the Thai kickboxer’s equivalent of the Pulitzer Prize). But no wonder he’s picking up prestigious door stoppers and the noteworthy recognition of his industry peers. The 130-136llb daddy of the elbow made a big impact in a fight packed year, with a jaw-shattering knock out of Petpanomrung in September, and grueling points victories against the hard-punching Yodlekpet and Saen (a March clinch fest of elbows, knees and sweeps).

Munagthai is not exactly Mr. Nobody from Nowhere. He first came to prominence in 2012 as Lumpinee Stadium’s 108llb champion, went on to become Thai Channel 7’s 130llb champ and is pretty much considered the Number 1 super featherweight kickboxer in Thailand. Why all the sudden rage? Because win, lose, draw or disqualification anything can happen in a Muangthai fight.

Despite a December 2016 loss on points at Bangkok’s Lumpinee Stadium (his final bout of the year) against Yodpanomrung, and getting picked apart by Sangmanee at Rajadamnern Stadium in June, the boxer from PK Saenchai Gym (yes that Saenchai) has distinguished himself in his career as a killer robot with the slyest boney edged blades in the biz. It’s a salutary reminder for 2017, and beyond, that Muay Thai is not just the art of the foot, knee and fist. It is also the art of the elbow, quite possibly the deadliest weapon in a Thai boxer’s armory. “No other weapon,” writes Muay Thai coach and historian Panya Kraitus, “could rival the elbow in terms of violence and blood-drawing capacity.” The fight career of Muangthai provides much evidence of that. 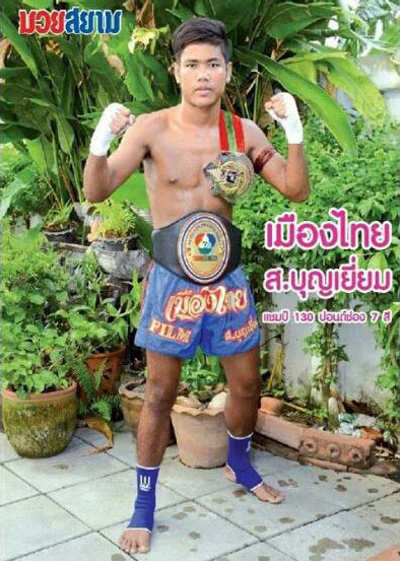 And don’t let those aforementioned losses, recent and/or otherwise on the record, fool you into thinking that Muangthai is a top-level loser. Muangthai has a nasty little habit of avenging his defeats with a left, right, up or down elbow knock out. Mind you, he’s not a one trick pony. With the trapping limbs of an octopus, and eight sharp edges that could file the teeth of a tiger, Muangthai is an interesting fighter to study overall. Seemingly oblivious to assault or damage, pushing forward with six limbs until in range to deliver a short, sharp cut from either two of his elbows, Muangthai is one of the most pugnacious and relentless Thai boxers active in a ring today. And, let’s face it; nothing says Muay Thai more than the skillfully pointed tip of an elbow. Elbow KO’s are more stylish, and spectacular, in a Muay Thai ring than an MMA cage. The MMA elbow knock out skills of Anderson Silva, Jon Jones and Gary Goodridge, sensational and novel in their own right, somehow pale in comparison to the gratuitous, but graceful, disrespect of the Thai elbow.

Case in point, Muangthai’s demolition job on Kaimukkao at Rajadamnern Stadium in November 2016. Kaimukkao’s exposed chin was a soft target and Muangthai’s upper cut elbow found its mark in Round 2. Kaimukkao got up at the eight count of the referee and was saved by the timely toll of the bell. Miraculous, back from the dead recovery of Kaimukkao aside, the sok hud, however, made another appearance in Round 3 and Kaimukkao was left snoozing on the canvas. It was lights out for Kaimukkao and another dramatic win for the elbow monster. 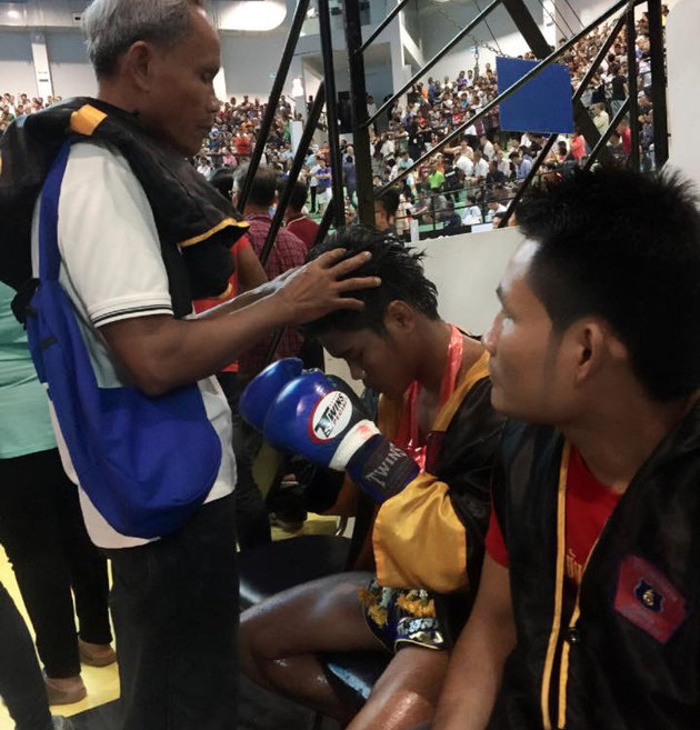 It’s not as if Thai fight folks don’t know about this weapon of destruction. It’s not exactly Top Secret. Throughout his fighting career Muangthai has been a stone killer with an elbow. And, even though boxers’ have got the book on Muangthai, and his twin elbows of impending bedtime, more often than not, he manages to close the gap on ring foes and take them out. He sniped Thaksinlek in July at Rajadamnern Stadium with a left elbow KO. Some punters thought it was a high stakes dive. Other rollers begged to differ. After all, Muangthai had mugged Thaksinlek with the very same blow in a KO victory at Rajadamnern Stadium’s birthday show back in December 2015. And it’s not as if he’s been inconsistent with this murder weapon of choice. In March 2016, Muangthai scored another elbow KO of Saen Parunchai in Round 4 (a fighter he had previously beaten earlier that month in a points victory at Lumpinee Stadium).

Open secret or not, the elbow will remain a bone of contention for Muangthai’s opponents. Muangthai likes the shot and all of his knockouts have come via the hinged joint. The victories by way of the elbow are always memorable, always electrifying. Wrapped in a tough clinch with Pet-U-Tong at Rajadamnern in October 2015, Munagthai defeated him with a sweet flexed right. And size does not seem to concern Muangthai. The bigger they are, the harder they fall. At the New Lumpinee Stadium, in March of that same year, he took out the taller and heavier Parnpetch with another cut of the bone, a right uppercut elbow that sent the crowd wild.

But it’s not just the fans at ringside going gangbusters for Muangthai’s elbow shots. The inebriate pad holder, the journeyman fighter, the washed up vet, the up-and-coming greenhorn, the big-eyed promoter, the swift-fingered cuts man, the old codger with the stool and bucket: everybody in the Muay Thai game loves an elbow fighter. The guys who shoot off the trap in a messy clinch of knees and sweeps to turn possible defeat into certain victory are few and far between. Muangthai, whose name literally means “Thailand” in the Thai language, is the current king of that range and a fighter well worth looking at in the months and years to come. Since 2014, the year that he was voted “Fighter of the Year” by the fat bellies and large whiskeys of the Sports Writers Association of Thailand, Muangthai has been training at Saenchai’s PK Gym under the tutelage of the great man himself. No such grooming would be wasted on a man who wouldn’t be a legend tomorrow. After all, “the elbow king” is a bit of a legend in his own right today.

Old School versus New School: The Greatest Thai Fighter of All Time