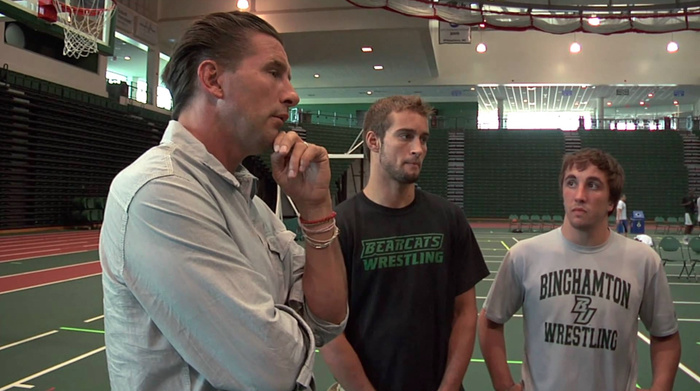 The NCAA Division I Wrestling Championships, amateur wrestling’s biggest and highest profile event, made its Big Apple debut this past weekend, when it was held at the legendary Madison Square Garden from March 17-19. ESPN provided extensive live coverage of the tournament, airing every match on every mat for the entirety of the event with a broadcast team that included former NCAA coach and All-American Jim Gibbons, Tim “The Voice of College Wrestling” Johnson… and actor Billy Baldwin.

While the star of Backdraft, Flatliners, and The Squid and the Whale and member of the famous Baldwin clan might seem like an odd or even whimsical choice for a guest analyst at a major wrestling tournament to the uninitiated, the actor is actually a passionate and longtime member of the grappling community. He’s been a part of ESPN’s NCAA championship coverage for three years now. He’s been an advocate for the sport for even longer. And before he was campaigning to keep amateur wrestling well-funded, in the Olympics, and in the public eye, he was on the mats himself.

As a child, Baldwin grew up fighting with his brothers not unlike the way Jack Donaghy (played by Billy’s most famous sibling, Alec) once described Donaghy clan battles on 30 Rock.

“We had typical rowdy, rambunctious, Irish-Catholic hooliganism,” Baldwin told Farther Off the Wall’s Tom Hoffarth in 2013. “A lot of roughhousing. I probably had four concussions and a fractured chin before I was 8-years-old just from Daniel throwing me off the roof of our house. There was all sorts of nonsense. Head-on collisions with bikes. Throwing baseball bats. You wonder why we went into show business instead of investment banking. When I was in the ninth grade, I was a lightweight, going at 112 pounds, and Daniel (three years older) was a heavyweight at 215, occasionally going to super heavyweight if they needed him to. He was fairly agile, and as a smaller brother, it would be like planes flying around King Kong, just swatting me away.”

In the fourth grade, Billy’s best friend’s father, wrestling coach Al Bevilacqua (who went on to become one of the most successful coaches in the sport... and the subject of the Seinfeld episode “The Race”), got him on the mats. He stayed there for the rest of his academic career.

“Wrestling was kind of like my life when I was in 10th, 11th and 12th grade. I ran with this pack of like 15 guys and we were all going through it together,” Baldwin told the Associated Press in 2013. “All of the skin infections and the cauliflower ear and the injuries, we all went through it together and we formed a really tight fraternity.”

After high school, Billy Baldwin attended Binghamton University, then a division three school, and became a part of their wrestling program from 1981-1985.

His official bio on the NCAA’s site embellishes those years quite a bit, proclaiming him “a former standout wrestler,” but Billy himself is the first to refute any notions of his competitive prowess. In a recent interview with ABCNews.com—a loopy but charming affair in which Baldwin, live from MSG, spent 15 minutes excitedly talking up his favorite matches and giving the anchors an extended demonstration with the help of two competitors—the actor/analyst declared himself “nothing special on the mat. I probably won a few more than I lost, but nothing special on the mat.”

Although his wrestling career was far from decorated, it still managed to leave a lasting impression. “The values that were instilled in me in wrestling—mental toughness, work ethic discipline—they’ve transcended the sport of wrestling and they’ve provided me gifts and tools that have transcended the sport and have allowed me to succeed as a dad and as a husband and as an artist in the show business community and as an activist in my community, and I thank wrestling for that,” he said in a 2010 talk about the importance of college wrestling.

Baldwin stepped away from competition when he “surrendered to the reality” (as he put it to the AP in 2013) that he wasn’t cut out to be a champion, but he never left the sport completely. When Binghamton’s wrestling program was discontinued at the end of the 2004 season, the actor was instrumental in the fight for its 2005 reinstatement. He is also a member of the Committee for the Preservation of Olympic Wrestling, “a committee of highly-respected leaders within the American wrestling community [...] whose mission is to insure that wrestling remains as a core sport of the Olympic Games.” As part of his job to keep wrestling’s current challenges and its continued value in the public eye, he’s managed to recruit Steve Buscemi, Ashton Kutcher, Mario Lopez, Mark Ruffalo, Channing Tatum and his brother Alec to the cause.

For Baldwin, this is far from a simple case of giving back. His continued involvement with the wrestling community in whatever form that takes is one of his favorite things in life. “John Irving has a quote about how being involved with the world of wrestling brings him more joy than virtually anything else in his life, including his writing. I feel the same way,” Baldwin said in his 2010 talk, before sharing an anecdote about a recent visit to his therapist where he spent the entire hour talking about wrestling, going back to New York to visit his high school teammates, and checking out his alma matter’s team upstate. The therapist told him that he’d never seen a bigger smile on his face. “His recommendation for $250 an hour?” Baldwin quipped. “Was that I take that trip and visit the team.” Because wrestling provided that much joy in his life.