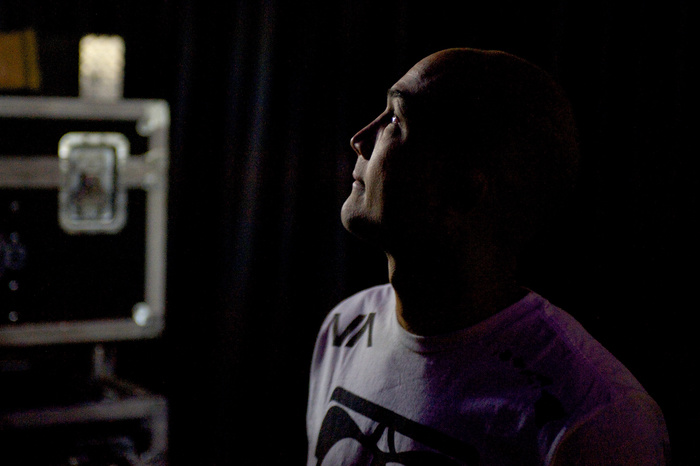 There have been few falls from grace as ugly and lengthy as that of BJ Penn. Nobody who knows the game is hung up on his 16-10 record, he has nothing to prove to anyone who knows their onions in that regard. It is simply that Penn spent so many years being in many ways remarkable, in a few ways wanting, and continued to drag out his attempts to find the mythical 'motivated BJ Penn' rather than addressing the actual issues in his game. After trying to rekindle the magic at welterweight—a class where he curiously has only two victories, over the same fighter—and then finally attempting a comeback at featherweight after years of hating weight cuts, very few fans want to see him any more. On the one occasion that Penn did move away from his comfortable, familiar surroundings in Hilo and attempt to develop something new, he came out looking like a parody of Renan Barao in that dreadful and unnecessary third fight with Frankie Edgar. It just seemed like too much change, too late in the day.

Penn's story was always that of the terrifying top player. A guard passer so skilled and unique that the top game he was working fifteen years ago hasn't yet been replicated in mixed martial arts. Another great guard passer who excelled in forcing the half guard, Penn was unique in that he didn't look to just split his opponent's guard and step over one knee until they were forced to consolidate half a la Marcelo Garcia or Benson Henderson. Nor does Penn tripod to achieve the same effect, as Demian Maia does. Instead Penn used a peculiar hook above his opponent's knee, achieving a unique pigeon stretch position while sat on his opponent's trapped leg.

We won't milk the subject for too long here because the marvelous BJJ Scout performed a complete study of the position which you should have saved to your hard drive and be displaying in a framed iPad above your MMA shrine. Effectively the position changes the angle of Penn's hips from pelvis down as if he were on his hands and knees, to an angle of sitting on one butt check, freeing his rear leg to step over and force a butterfly half guard, where Penn is one knee away from mount. No fighter has ever had such dexterous, beautiful passes to mount which worked at the highest levels of the game. Between his forcing butterfly half and driving over the hook, using the near side underhook pass from traditional half, and smash passing into what he termed 'dope mount', Penn had twice as many routes to mount as he would need in any situation.

While Penn was famed in jiu jitsu circles for his unpassable guard, he was never a great threat from the position. Penn never submitted anyone of note in his MMA career from his back, most often fighting to return to his feet. It was Penn who first preached the trinity of the ideal MMA guard: sweep, submit, or get up. The last part was enormously undervalued and poorly understood for a very long time while Penn was fighting and many fighters still fall into the trap of focusing on just one. Even towards the end of his best days, Penn was able to use a beautiful overhook butterfly guard to get up from beneath Frankie Edgar. And we can all recall that funky octopus guard transition to Matt Hughes' back as Penn threatened his sit up guard, before slipping beneath an attempted elbow. But Penn's guard was rarely needed against most opponents because he could stuff a takedown better than anyone in the lightweight division at the time. Even welterweights had to work for it. Feeding the single, Penn could work effortlessly on one leg, hammering in uppercuts with the inside of the wrist and palm to bloody his opponent's face as they clung to a single leg attempt.

Penn's boxing grew with him through his time in the cage. Starting out as a square shouldered banger with a sharp, snappy left hook, Penn moved to a more bladed stance and came to utilize his jab, dipping jab, and big right hand counters in a far more classical, economical style. But the dirty secret of Penn's career was reach and range. For all his attempts at fighting up in weight, Penn never beat a man with a reach on him who could actually make it a factor in the fight. In his first bout with Georges St-Pierre, Penn surprised the inexperienced but much bigger man by stepping in with dipping jabs when St-Pierre stepped in with his own poorly concealed jab. When the two met again, Penn was completely at the mercy of St. Pierre's improved jab, feints and distancing.

The counter jabs which troubled Georges St-Pierre so much.

In fact, Penn's fascination with going up in weight was always a strange one for a fighter who loved his jab, enjoyed boxing exchanges, and had seemed to not even train his kicking game. Penn's record against world class welterweights is especially curious. At a mediocre 2-5-1, Penn's two wins came over the same fighter, who just happened to be the second most successful welterweight in UFC history. Penn simply seemed to have Matt Hughes' number—he could box him up on the feet and Hughes, who had few clever set ups to hide his level changes, struggled to get the wily lightweight down any time he could get a hold of him.

Another of Penn's great weaknesses was a hatred of body shots. Penn moved his head better than anyone of his era, but a couple of good blows to the tummy and his stamina would suffer. Georges St-Pierre demonstrated this with jabs to the solar plexus which had Penn dropping his hands, and with elbows to the midsection from inside Penn's guard. Nick Diaz's body work is among the best in MMA, and it quickly became a problem for Penn after a few of the blows began to trickle through. Rory MacDonald paralyzed Penn with snap kicks and hooks to the body in Penn's last welterweight appearance.

Nick Diaz's brilliant high-low combinations against Penn along the fence.

Penn's classical boxing stance cost him severely against the man who would unexpectedly become his nemesis, Frankie Edgar. Penn was forced to pivot around his lead leg each time Edgar moved slightly past it, and he could not cut the cage to force boxing engagements with Edgar.  Edgar was free to move around, feint, change levels without being placed under any pressure. Penn's heavy lead leg and long stance allowed Edgar to pick up his favorite single leg, from which he would hit foot sweeps, push away and kick, or even move behind Penn. Edgar's movement, variety and pace allowed him to best Penn completely in their second meeting.

The third meeting between BJ Penn and Frankie Edgar is the reason that so few long-term fans of Penn want to see him back in the cage. It is also likely the reason that Penn feels he must get another fight in. When Penn finally tried to adapt and show something new, he came out looking awkward, hittable, square, and anything but threatening. With his feet almost level Penn awkwardly jogged towards Edgar, moving his rear foot before his lead foot, unable to evade strikes and unable to stop the takedowns. It seemed as though Penn's time at Nova Uniao had inspired him to attempt the more upright style of Renan Barao. One would have to imagine the high, square stance was in order to check kicks and make the most of Penn's height. The first he failed to do completely:

And in terms of using his height, a height advantage stops being useful when the opponent's head is lower than the shoulder. Optimal reach is in front of the shoulder—an opponent who is a couple of inches shorter is perfect—anything lower and the fighter is punching down: losing reach and opening himself up to easier counters. But Penn was completely upright and each time he threw out his lead hand he was punching down at Edgar with his formerly elusive head served up on a platter, allowing Edgar's right hand to land over the top.

Penn was stuck underneath Edgar and for the first time in his career looked absolutely helpless on his back. It was among the saddest instances of 'just one more' in the history of this young sport.

BJ Penn's opponent this weekend is Yair Rodriguez who is perhaps the most exciting fighter in the game today, unless his opponent hangs around and Rodriguez runs out of ideas. Known for his array of spinning and jumping attacks, Rodriguez's last fight saw him dragged through a twenty five minute fight by Alex Caceras once the latter realized that if he simply retreated each time Rodriguez began moving, the Mexican taekwondistador could never kick him. Where most famous back and wheel kickers use a misdirection and positioning to set up the big spin, Rodriguez simply spins all the time, every time.

Unfortunately for Penn, Rodriguez is one of the most active kickers in the game and fights from a much longer range than Penn prefers. If Rodriguez doesn't want to, and Penn doesn't show the ring science to build some pressure, there is no reason for Rodriguez to step into punching range with Penn. Make no mistake though, Rodriguez's boxing is as wild, hunched and lunging as Diego Sanchez's was in Penn's penultimate victory in 2009.

But while Rodriguez was beating a dead horse by leaping and spinning wildly from miles away in the fifth round of his fight with Caceres, he was still in condition to do that which is quite a feat. Especially considering the fight was at altitude in Salt Lake City. Penn's cardio has been hit and miss throughout his career and he has a ton of ring rust and is 38-years-old.

With all of that being said, this is not an impossible fight for BJ Penn. Yair Rodriguez is still a rough diamond. He can be pushed to the fence on straight retreats off his kicks, and driving him there could allow Penn to batter him with punches on the way out, trap him to the fence and dirty box, or get to work wrestling.

We all recall when Penn surprised the massive welterweight wrestler, Jon Fitch out of the gate with a competitive wrestling match. The Prodigy's takedowns have always been well set up and effective. Hell, if it weren't BJ Penn we could talk about kicking the legs or working the body as Rodriguez circles out along the fence, as Rodriguez's flashy game is so reliant on gas and agility.

But then this writer doesn't like to think about a Penn victory too much because 'one last fight' has rarely ever been the last if it turns into a victory. There is no shame in getting older, losing a step, or not being able to learn the elements of the game which were an occasional nuisance but are now more prevalent in MMA. The problem is that it often takes a series of unanswered losses to make a fighter really accept that. One here would make it four in a row for Penn dating back to 2011.

The book seems to have been written on BJ Penn. We have all closed the cover and reflected on what a wild and remarkable ride it was, but he is still scrawling in the margins and trying to rewrite the epilogue. Unable to leave the fight game well enough alone, BJ Penn returns this weekend for just one more, once more.

A Ghost Under the Ring Lights