Bob Arum Is Confident that Pacquiao Will Face Mayweather in May 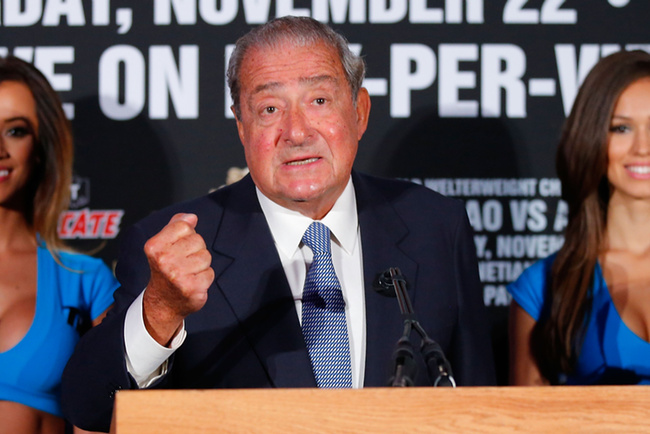 This week in Miami, on Tuesday night, the struggling, LeBron-less Miami Heat faced the Milwaukee Bucks at home, at Miami’s AmericanAirlines Arena. They lost to the Bucks 109-102, but at least one positive thing came out of the evening.

Cozily seated beside the Heat bench, Money Mayweather watched on as the heat came close, but failed to deliver a win. Also court-side but opposite of Mayweather, Manny Pacquiao was also present. At half-time, both welterweight legends met each other in person for the very first time.

An avid fan of basketball, Pac-Man made his professional basketball debut in the newly-created KIA Sorento team, a member of the Philippine Basketball Association. He played seven minutes, but did not score. He committed two turnovers, but his team was triumphant over their opponent, the Blackwater Elite.

Manny said Floyd gave him his number, and that they would begin communicating with one another. Both men are said to have spent over an hour together discussing private matters that day. 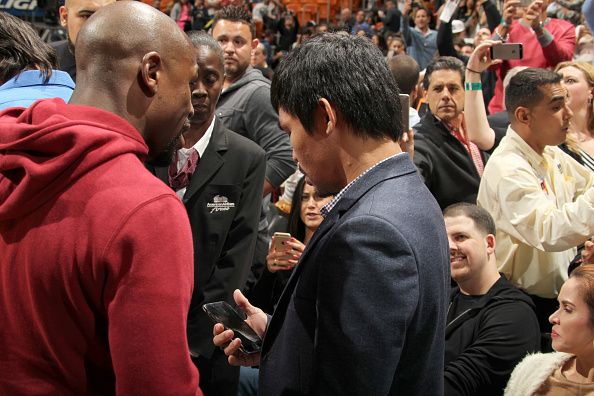 That was the latest in a saga that wishes to see Mayweather finally fight Pacquiao, a super-fight for which sports fans around the world have been clamoring for.

As of today, Friday, January 30th, the highly-anticipated contest should be “finalized in the next couple of days.” Top Rank promoter and CEO Bob Arum spoke to the New York Post, explaining that no deal has yet been struck, but that everything is “moving in the right direction.”

The hold-up is partly being attributed to difficulties in achieving consensus for a joint pay-per-view show between Time Warner/HBO—with whom Pacquiao has a contract—and CBS/Showtime—with whom Mayweather has a contract. The last time both networks came together was in 2002, when Mike Tyson challenged then-heavyweight world champion Lennox Lewis.

As far as how successful the Miami meeting actually was, Arum said he thinks “it helped a lot because we were all putting papers together, and there was still a question as to whether Floyd really wanted to do the fight or not. Based on the meeting with Pacquiao in the hotel suite, Manny and [Pacquiao adviser] Michael Koncz were convinced Floyd absolutely wants to do the fight.”

Arum and Pacquiao gave Mayweather a end-of-January deadline to agree to a fight. Pac-Man’s camp has stated on several occasions that their side was all set, and that Mayweather had been reticent. We’ll see in the next couple of days if this is actually materialized—regardless, Mayweather has said that he plans on fighting May 2nd at the MGM Grand, be it against Pac-Man or otherwise.

One Step Closer to Mayweather vs. Pacquiao