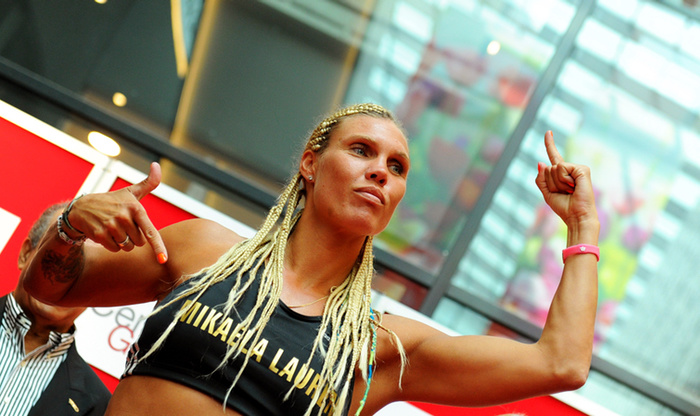 WBC Female World Super Welterweight champ Mikaela Lauren caused a minor media stir earlier this week when the Swedish boxer declared that she wouldn’t fight this weekend unless the promoter of the card provided a “ring boy” for her fight.

“I’ve spoken to my promoter and told him that I will not fight if they use number girl. Why should there be a half naked woman in the ring when two top female athletes are competing? I think it’s sexist. Women shouldn’t be seen as sex objects!” Lauren, who is scheduled to defend her belt against former IBF World Champion Ivana Habazin at the Hovet arena in Stockholm on Saturday night, told World Boxing News. “I want a number boy. I think that’s only fair, and I’m sure it will give the women in the audience some pleasure as well.”

Heteronormativity and gender binary issues aside, Lauren makes an interesting point, and it’s one that a lot of female fighters seem to be struggling with lately. While women should be perfectly free to be ring girls if they so choose without being dismissed or insulted as bimbos, sluts, or whatever insult is thrown at women who are seen as having a purely ornamental role in our society, the fact is that their role was created to be pure eye candy in an age when only men were stepping into the ring or the cage. And women who have literally and figuratively fought to be on the other side of that equation are bound to feel a little uncomfortable when their work, which is arguably much harder and far less encouraged by society, is juxtaposed against the comparatively simple and disproportionately rewarded work of the conventionally pretty women generally employed to hold cards and look hot. Ideally, it would be great if female fighters could express these frustrations without taking shots at the ring girls themselves—the problem isn’t the women holding the cards, but the institution itself—but then ideally they wouldn’t be facing the kind of sexism and harsh beauty standards that makes the existence of ring girls so frustrating for them in the first place, either. 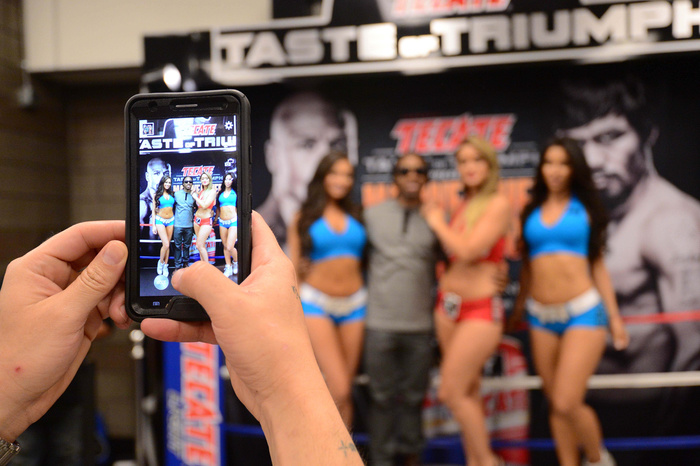 It’s an issue that other promoters have started to consider. In a 2013 story on Belts of Honorius adding “ring dudes” to their events, promoter Nael Chavez told Fightland writer Amy Winters that he first got the idea for them after watching what happened on their first card. “I saw one of the women who knocked out her opponent standing with her belt next to this model, and I didn’t like how it looked. The fighter body is completely different from the ring girl’s body, and they’re both beautiful.”

“To Chavez,” Winters added, “the juxtaposition of the two women seemed unfair to the female fighter, who worked at least as hard for her body as the model did and definitely took more hits doing it.”

The ring boy, or dude, is a relatively simple good will gesture that can help to tackle a complex problem. As long as it doesn’t devolve into sexist or homophobic jokes, inviting some scantily-clad Magic Mike-style men to a fight card takes at least some of the edge off the glaring sexism of the card-holding institution, and it does so without taking anything away from the men involved, because there’s not nearly the same amount of baggage or inequality involved in the friendly exploitation of willing guys.

When it’s not done as a joke, the inclusion of ring boys seems to go well, like it did for Honorius. And even when it starts off as a joke, like the 2015 ad campaign for Pot Noodle in the UK that featured an eager young man going through Rocky-style training to become a ring boy, audiences appear to be on board. Sure, some of the people who cheered the ad’s star, Michael Moran, when he actually appeared at the beginning of the Anthony Joshua vs Gary Cornish card at London’s O2 last fall probably just thought that it was funny to see a slightly-built young man in a bikini, but it’s arguable that just as many were genuinely amused by the new spin that the original ad put on the idea that hard work and training are inherently masculine, and participating on the sidelines is inherently feminine.

Which leads to another interesting bit of potential fallout for adding ring boys to the mix: if men join in and treat the activity as something they truly want to participate in and work toward, it cold lead to the ring girls getting more respect as well. As boxer David Haye’s leering commentary on ring girls so grossly illustrated in 2013, some fighters don’t have a lot of respect for the women who support their fights in professional capacity, and a lot of promoters let them get away with. A lot of them likely perpetuate that attitude, too. There’s a good chance that many people in positions of power would be less likely to treat card people poorly if there were also men involved. At the very least, it might force people to think twice about their preconceived notions about the role of sex and sexism in combat sports.

Perhaps the most interesting development in Lauren’s demand, though, was promoter Nisse Sauerland’s completely chill and rational response. “I respect Mikaela’s opinion,” he said. “It is not something we had anticipated, however, we will now endeavor to find a number boy for her World title defense.”

If the reception for the chosen ring boy is even half as cool and practical as the search to find him is shaping up to be, we might just be onto something here.