Boxing Great Steve Collins: McGregor Is the Greatest Fighter Ireland Has Ever Produced 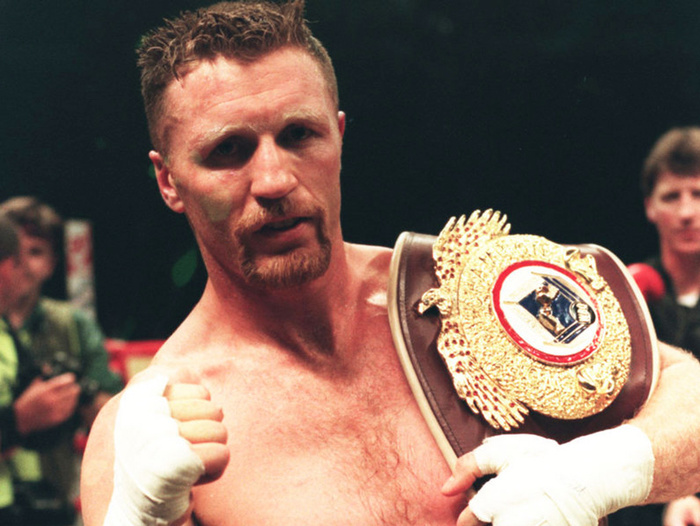 Legendary Irish boxer Steve ‘The Celtic Warrior’ Collins has heaped some lofty praise on his countryman ‘The Notorious’ Conor McGregor after visiting him at SBG Ireland early in the week, as he claimed that the Dubliner is the “greatest fighter Ireland has produced”.

In one of the definitive moments in Irish sport, already a WBO middleweight champion, Collins jumped up the weight ranks to defeat the seemingly unbeatable Chris Eubank for his super-middleweight title back in March, 1995. Fightland talked to Collins on the 20th Anniversary of the Eubank fight last year.

“I’ve met Conor a few times, but when I visited him ahead of this fight I was very impressed with his mindset,” he explained. “His preparation has obviously gone really well. He looks like a total powerhouse. I’m expecting to see an even better fighter than we saw in his last fight. I really feel like that extra weight is going to be a massive advantage to him.

“He’s definitely the best I’ve ever seen him since I began to follow his career. I know I haven’t been following him from the very early days, but this step up in weight is going to be a huge benefit for him. I’m ready to see a much stronger fighter next time out, and a better fighter.”

Collins further backed McGregor’s decision to venture up to lightweight, insisting that having some extra pounds on his frame will not only increase his strength but his stamina too.

“When I saw him stripped off for the last fight he was so lean. He had dropped a lot of weight and that was obvious from looking at him. He looked skinny to me, but I know that he’s incredibly lean. Seeing him like that, and although he performed amazingly well, I can see the extra few pounds being an advantage.

“Not only will he be stronger, but he will have more stamina too. I think he’s going to need that stamina too because this guy he’s facing is a very good grappler. He’s going to be trying to wear Conor down and use up his energy. I can see that extra weight helping him if he gets into those kinds of situations.” 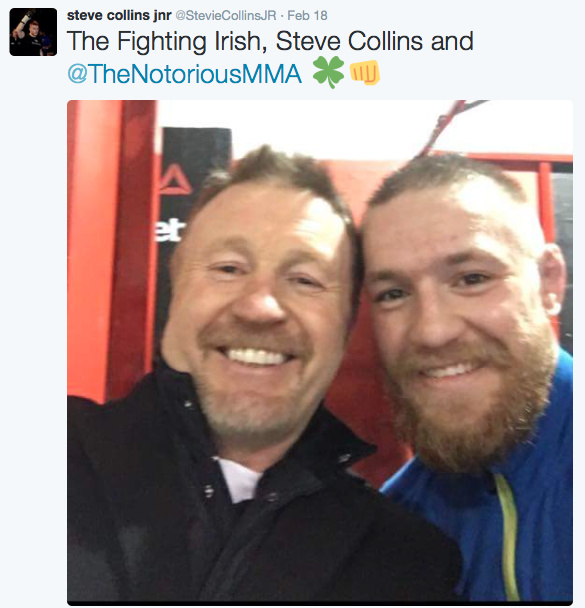 Another similarity between Collins and McGregor is their acuteness in the mental aspect of the fight game. Before their historic meeting at Millstreet, Collins spooked Eubank when he claimed that he had been hypnotized to punch harder, move faster and withstand more blows. Although he said he had never discussed the mental approach to fighting with 'The Notorious', he said he is very aware of the featherweight champion's "strong mind".

"I've never discussed that with him, I don't have anything to do with his training or anything like that. I'm just enjoying watching him from a distance.

"I do understand that he has a very strong mind and that allows him to do what he's doing very well. It's clear how smart Conor is from the way he handles the mental side of the sport, even when he is dealing with the media. It's a pleasure to watch him going about his business."

Although he is the most popular sporting figure in Ireland by quite a margin, there is still quite a large number of Irish that aren't very impressed by McGregor's outspoken manner and the sport that he represents. As far as Collins is concerned, there is always going to be a certain amount of animosity when you are as successful as McGregor is.

"You only get knockers and begrudgers when you're successful. When you reach a certain level of success, a lot of people will come out trying to knock you out of jealousy or whatever, and that's a problem that successful people have to deal with. Conor is very successful and there is some jealousy out there. But why would he listen to them? They're fools that have accomplished nothing," he laughed.

Asked whether he thought McGregor would go on to be remembered as one of the great Irish fighters, Collins was adamant that 'The Notorious' is already "the greatest fighter Ireland has produced".

"He'll definitely be remembered as one of the greatest fighters this country has produced, in fact, I already think he's the greatest fighter Ireland has produced. He's a savage once he steps in to fight, but he's a complete gentleman outside of the ring. That's it. He's going to be a double weight world champion, without a doubt."