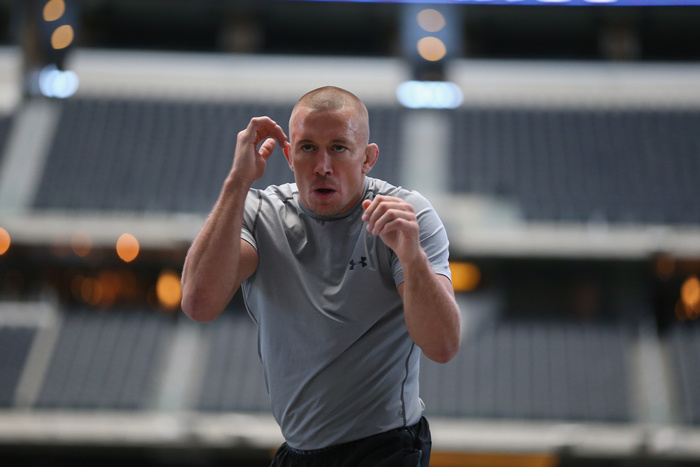 A week ago, Georges St-Pierre and his lawyers said they'd cut the contractual cords that ensured the former welterweight champion's return would have taken place in the UFC. Count this among the collateral damage of his self-proclaimed free agency: a call for fans to boycott UFC 206, slated for December 10 in Toronto, Ontario.

A small-scale social media groundswell, ostensibly out of solidarity for St-Pierre and a looming dispute with the UFC over his contractual status, is calling on consumers north of the border to vote with their wallets. By varying degrees, this means boycotting the UFC generally or boycotting UFC 206 in particular. 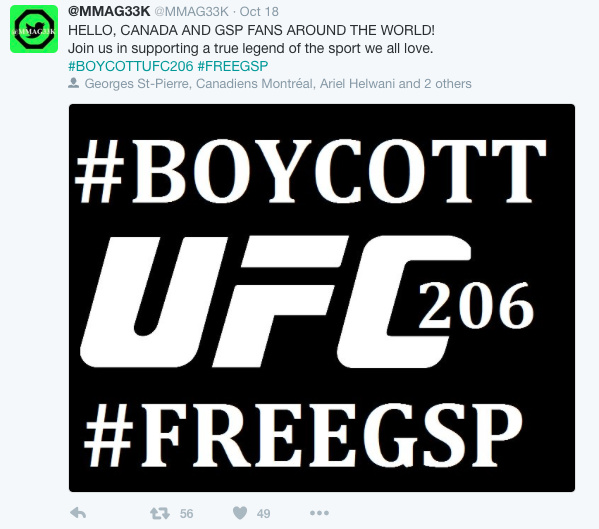 The hard feelings started because GSP's comeback after a three-year hiatus from MMA was rumored to headline UFC 206, possibly against Nick Diaz. Though never confirmed, the UFC's homepage had "TBA" versus "TBD" slotted into the main event until recently, even above the light heavyweight title rematch between champion Daniel Cormier and challenger Anthony Johnson that now occupies the top spot. And sure, even if their first fight drew poor pay-per-view returns, Cormier-Johnson is as competitive and relevant a fight as can be at 205 pounds without Jon Jones around. But without GSP, UFC 206 echoes of when BJ Penn and Diego Sanchez headlined a show in Memphis because Quinton "Rampage" Jackson bailed on a bout in front of his hometown crowd.

However, GSP is a red herring in the rebellion against UFC 206. Look at the rest of the bout order: Cub Swanson versus Doo Ho Choi, Zach Makovsky versus John Moraga, Valérie Létourneau versus Poliana Botelho, John Makdessi versus Lando Vannata, and the cuts only get deeper from there. Any call for a boycott is less about GSP than where he would've made his return: on a card that's hollowed-out and garbage-ass without him. (No offense to the individual fighters on UFC 206 themselves, who've largely been fun to watch on cable TV. "Hollowed-out and garbage-ass" purely applies to them being clustered together and asking the rest of us to pay $60 extra for the pay-per-view or even more for seats in the Air Canada Centre.)

We've already talked about how the UFC's new owners don't have the same affinity for Canada that their predecessors once had, letting Rory MacDonald walk and laying off most of the employees in the UFC's Toronto office. And how can you not feel hurt if you're a citizen of the country where the UFC staked its fortunes and hosted frequent, well-stocked events during GSP's title reign? For months you're teased with the promise of your most esteemed countryman starting a run at reclaiming his throne on home turf. Then, in his absence, you have to reckon with the kind of threadbare pay-per-view that the UFC would have had to Frankenstein together back in 2014, when it seemed like every fighter on the roster ended up getting ACL surgery.

We've been here before. It took Jon Jones pulling out to show how forgettable the rest of the fights scheduled for UFC 151 would have been, teaching the paradoxical lesson that the strength of a pay-per-view card lies less in the headliner than in the top-to-bottom bout order. The thin line-up at UFC 206 is partly a casualty of UFC 205's embarrassment of riches: siphoning even one or two bookings of consequence off of the New York card would have gone a long way toward overshadowing the blah in Toronto. In the meantime, it's hard to know how seriously to take calls to boycott UFC 206, and it's even harder to know whether they'll leave a void in the Air Canada Centre that can't be filled with comp tickets.