Brace Yourself for Some Serious Action at Bantamweight 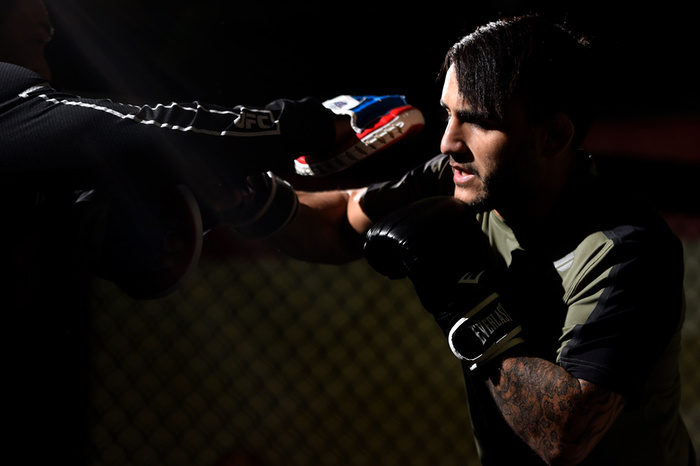 It’s crowded at the top of the bantamweight division.

Sitting on the divisional throne is Dominick Cruz who, earlier this year, returned from an ridiculous stretch of injuries to reclaim the title with a tooth-and-nail decision defeat of TJ Dillashaw. Since then, he’s tightened his grip on the belt with a lopsided defense against his long-time rival, Urijah Faber.

Directly on Cruz’s tail is his next challenger, Cody Garbrandt. The undefeated 24-year-old earned his title shot, which will occur in the co-main event of UFC 207 this December 30, with a run of five-straight wins in the Octagon, including first-round knockouts of Augusto Mendes, Thomas Almeida and most recently, Takeya Mizugaki.

Then, there’s the former champ TJ Dillashaw. Though he surrendered the title to Cruz in January, the margin by which he lost is as narrow as they come. The Ultimate Fighter veteran remains one of the bantamweight division’s very finest players, as he proved on the undercard of UFC 200 in July, when he dominated long-time contender Raphael Assunçao to a unanimous decision win.

Beyond Dillashaw, there is John Lineker. Lineker began his UFC career as a flyweight, but the success he achieved in this division was marred by his tendency to miss weight. These weight issues eventually forced the UFC to push him north to bantamweight. And though he did miss the bantamweight division’s 135-pound cap for recent battle with John Dodson, that miss was only by half a pound, and he’s looked absolutely fantastic otherwise, defeating Francisco Rivera, Rob Font, Michael McDonald and Dodson since joining the division.

Then there’s Bryan Caraway, who’s been hovering on the edges of title contention for years. He’s a solid 4-1 in his last five, with a 2014 decision loss to Raphael Assunção being his only hiccup in that stretch. Most recently, he’s impressed with decision defeats of former title challenger Eddie Wineland and red-hot prospect Aljamain Sterling, who entered the bout with a perfect record.

And finally, there’s Jimmie “El Terror” Rivera. Rivera’s record speaks for itself: The New Jersey native is the owner of an incredible 20-1 mark as a pro. His four most recent wins have occurred in the UFC, where he knocked out Marcus Brimage in his debut, and went on to decision top opposition in Pedro Munhoz, Iuri Alcantara, and most recently, Uriah Faber.

Yes, the upper echelon of the bantamweight division is packed with elite fighters, all of who are arguably deserving of a title shot. While this has surely led to some stressful days at the office for UFC matchmaker Sean Shelby, it’s a great problem to have from the perspective of a fan.

Here’s where the news gets even better: it’s now looking like all six of the aforementioned men will be fighting in the next two and a half months. That not only means a hell of a lot of bantamweight entertainment on the horizon, but also that the division’s complicated title picture will be much clearer in a few months’ time.

The most major of these looming bouts, of course, is Cruz and Garbrandt’s UFC 207 title fight, which we’ve been drooling over for some time. That, however, is not where the fun ends.

On Wednesday evening, it was announced that a bantamweight battle between Dillashaw and Lineker had also been tacked onto the December 30 card. This fight, which represents an incredible style clash, will almost certainly provide us with the next opponent for the winner of Cruz and Garbrandt’s co-main event title fight. That is to say, the winner of UFC 207’s big bantamweight scraps are likely to fight each other for the title sometime in the following months.

Not long after reports of this Dillashaw vs. Lineker bout began to swirl, the ever-reliable Ariel Helwani reported the Caraway and Rivera would also be fighting soon – you guessed it, against each other. According to Helwani, the two fighters are being considered for a January 15 card – though Caraway wouldn’t mind getting back in the cage sooner.

So, while the contendership picture is incredibly murky at the moment, it’s likely to be a hell of a lot more straightforward in a few months’ time. Cruz will have defended his title, or Garbrandt will have shocked the world by stealing it. Either Dillashaw or Lineker will have established themselves as the man for next shot. One of of Rivera or Caraway will have made one more massive step toward a title shot of their own. And we get to watch it all unfold from the comfort of our couches and bar stools. It’s a good time to be a fan of the bantamweight division.

Dominick Cruz: One More Ghost From the Past