Brace Yourself For "The Ultimate Fighter 22," AKA "The Conor McGregor Show" 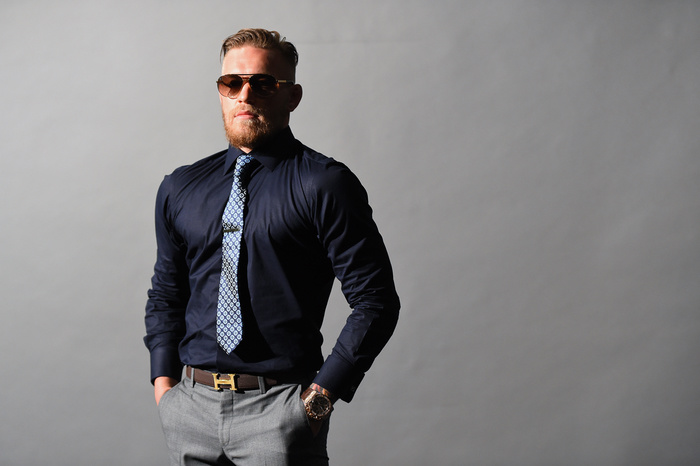 As if you weren’t busy enough, tonight the 22nd season of The Ultimate Fighter premieres on Fox Sports 1. And even if you had already decided that 21 seasons of any show is quite enough for anybody, know this: that reigning interim featherweight champion Conor McGregor will be coaching this season, and to miss anything McGregor does at this point in his career is the surest way to find yourself on the outside of a great glass door looking in at a once-in-a-lifetime extravaganza. For better or worse, Conor McGregor has claimed the UFC as his own (conceding one enormous ground-shifting chunk for Ronda Rousey) and turned every other fighter on the roster (or every male fighter anyway: “So fuck everybody else up here”) and every one of the promotion’s institutions, like TUF, into his foils.

Yes, at this point Conor McGregor can do whatever he likes and turn whatever he touches into gold. The risk now—for the man who has the belt he wants and the money he covets and the fame he dreams about and the attention he craves—is that boredom and cynicism will set in. That all the traveling and constant charm assaults and all the lights and cameras will wear him out and all the riches and material goods will dull his spirit, like a king gone to seed on wine and rich foods. That he could give in to the lure of detachment and indifference that threatens anyone who gets everything he wants.

And for the first time since McGregor exploded into the UFC two years ago it sounds like that may have happened, or almost happened, during the taping of this season of TUF. First there were reports from McGregor’s fellow coach Urijah Faber that the Irishman only showed up to half of his team’s practices during the shoot. Then this week Faber’s teammate and TUF assistant coach TJ Dillashaw told a press gaggle that McGregor was “hardly there” as a coach: “He didn’t really even show up. He was there for the weigh-ins and fights, it seems like. He wasn’t there for his team at all.”

Some coach. Some reality TV star.

“When it was time to show up I showed up,” McGregor said last week in response to Faber’s criticism of his coaching methods. “I was not getting emotionally attached to anybody.”

A sentiment like that should scare anyone interested in the dramatic value of the 22nd season of The Ultimate Fighter, because emotional attachment is the fuel that makes reality TV go: big, huge, garish, unreasonable amounts of emotional attachment. God knows the best moments in the show’s history have been the ones with the greatest emotional resonance, from Dana White scaring the wits out of the cast of the first season with threats of average lives to Chael Sonnen (McGregor’s predecessor as the UFC’s king of trash-talk) taking off his self-promotional cap to admit that, contrary to cliché, failure, for an MMA fighter, is “always an option.” Those, not the fights or the contracts, are the moments that make The Ultimate Fighter. What wouldn’t make the show is a superstar occasionally floating down from his penthouse to the gym to bless his team with his presence before disappearing again, high and mighty and emotionally unattached.

Thankfully, try as he might to paint himself as a dispassionate guru, Conor McGregor is nothing if not a man of emotional investment, and as the countdown to season 22 begins in earnest it’s starting to feel like his claims to indifference are just another come-on. Partway through his UFC Tonight appearance—after singing the praises of his new Bentley and trash-talking Faber, as expected—McGregor admitted that after all the travel and press obligations leading up to his June fight with José Aldo and the mental and physical exhaustion resulting from training and adapting to a new opponent three weeks out, after carrying the torch for the UFC and transforming himself into the promotion’s one-man hero, after going from nothing to everything in barely two years, he was upset about being asked to turn around and appear on The Ultimate Fighter. Upset, unmotivated, and embittered. Then he sat down on the first day of filming to watch the qualifying fights and pick teams and he had a revelation: “I sat back and I said, ‘This is a great life. This is what I do this for. This is the experience of a lifetime. If I carry on with this approach that I don’t want to be here, it’s a negative approach and it will just bring more negativity into it. So I embraced it.”

In other words, if the upcoming season of The Ultimate Fighter turns out to be the success we know it can be, we once again have Conor McGregor’s cherished Secret to thank for it. The Secret, that  “mystical” “philosophy” that claims the universe is governed by the “law of attraction” and that positive thinking will breed positivity and bring you anything you desire: wealth, happiness, love, a cure for cancer, a championship belt. It was the Secret that turned a quiet kid in Dublin into a brash, confident young man, that turned an unknown cage-fighter from a country where MMA barely existed into the biggest thing the sport has ever seen, and that will undoubtedly turn The Ultimate Fighter into the next bizarre chapter in the Super-Colossal Magical Maniacal Life of Conor McGregor.

Conor McGregor and the Great Communal Power of the Spectacle