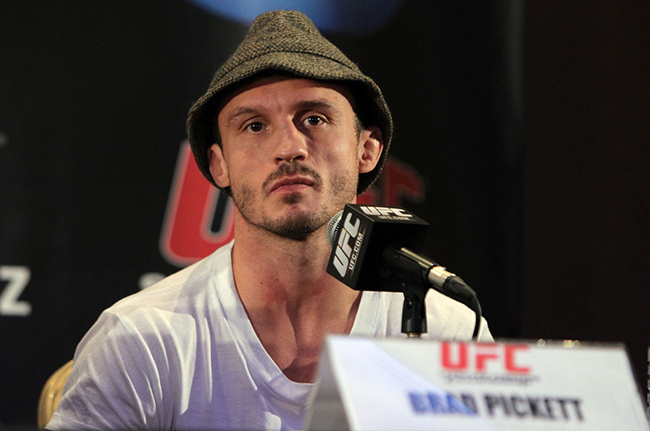 A proud Londoner, UFC flyweight Brad Pickett enjoys playing the postcard cockney. His walkout attire--a trilby and braces--pays homage to his granddad, a former East End boxer with whom he also shares his nickname, “One Punch.” Where things deviate from the script is that Pickett’s childhood included nearly three years on the Indian subcontinent. In the 1980s his parents, shoe designers and shop owners who counted celebrities such as Elton John and Mick Jagger among their customers, took the opportunity to partner with an Indian business magnate and embark on an adventure abroad with their two young sons. The UFC flyweight tells Fightland all about it.

Brad Pickett:I was about seven or eight when we moved. It was definitely a culture shock! I missed British chocolate bars and the usual kids stuff, but when I look back on my childhood I wouldn’t change it for the world. I’ve done so many things that I wouldn’t have done otherwise. I got into a lot of sports while I was in India. I played a lot of cricket; I did a lot of long distance running around the Himalayas. I became a pretty good runner while I was out there but found running quite boring, to be honest. I’d rather chase after a football!

When I think back to my childhood now, one thing I haven’t done that I’d like to is go back to India for a holiday. Before that, it’s hard for me to remember back to when my parents had their shops in London because I was so young, but I know loads of famous people came in. Lots of pop stars from the 1980s. If my parents were still alive now I could ask them.

My parents had a place in Noida just outside New Delhi but I didn’t go to school there. Well, I did for a bit but … it was quite funny--I went to a local school there and none of the teachers spoke English. I’d go to the classroom and sit there not knowing what the hell was going on! I’d leave the classroom and go and play with wild, stray puppies outside.

After a few weeks my parents asked, “So, what are you learning at school?” and I was like, “Well, no one actually speaks English.” They didn’t know about that! So after that me and my brother Russell went to a boarding school in Mussoorie, which is up near the Himalayas.

It was miles away from my parents so I only saw them at half term and the holidays. It was tough but I think it helped me and my brother bond. We’re still very close now.

It makes you socialise and mix with other people, too. Some kids nowadays come home, go in their bedroom, and play computer games and that’s it. The only people they make friends with are online. I had to go out and make friends. It was good for my character.

The boarding was at the bottom of a mountain and the schools were at the top, so we had to walk up and down this winding path every day. Every now and again there’d be hordes of monkeys and you had to be pretty careful if you had food on you! They’d come down and try to get it out your backpack.

One day I was walking down after school with my friend. There were two girls in front of us and they got mauled by these monkeys. We were young and scared so screamed and ran back up the hill, like “Aaarrrgghhh!”

I should probably change that story to make myself into a brave hero: “I wrestled a monkey and saved those girls!”

All the travelling I did as a kid has made it easier to split my time between my home in the UK and my training camp in Florida now, but the main thing is that I have a really understanding wife, Sarah. We got married last year and we’ve been together eight years in total. She sees the bigger picture. She’s also very independent; her time is valuable. She works in the fashion industry like my brother. My family are still in that world. Before I got into fighting I worked in fashion, too. It ended up being a desk job, though. I didn’t like that.

I nearly got into being a stuntman at one stage. My plan was to fight on the side to make extra money, but that never really got off the ground and I started doing well at MMA. I never got set on fire or shot at by James Bond, but I did a cameo in one movie. I can’t remember what it’s called now. It’s still something I’m interested in. I wouldn’t mind getting into movies in some way.

I don’t really miss working in fashion. There are some great things about the industry, like the discount on clothes you get, the clothing allowances and the parties, but I still have access to all that stuff. I've got the best of both worlds now

I have my own “sort of’ style but I guess my brother kind of grooms me. He’ll be like, “You’re going on TV? You can’t wear that!” My wife’s happy to let him do it. She’ll say things like, “Deal with him, will you?”

What do I think of MMA fashion? Oh my God! I dunno, people need to get shot for designing some of that stuff with all the bedazzled jewels, skulls, and flames on it. It’s so bad!

The Woman Behind the Man in the Cage

Jonathan Brookins Has Returned From India