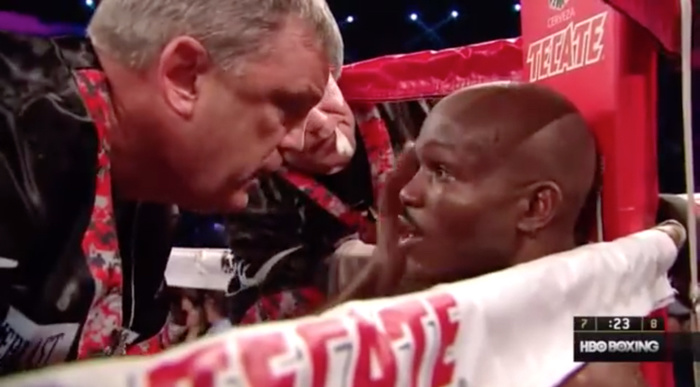 Teddy Atlas is arguably better known for his words of wisdom than he is as an elite boxing trainer. But, both of those talents came hand-in-hand on Saturday night as his new understudy Timothy Bradley’s outstanding performance culminated in him handing the tough Brandon Rios, his first ever stoppage loss at Las Vegas’ Thomas & Mack Center.

While Bradley beating Rios may sound inconspicuous, the manner of how the fight unfolded adds credence to the fact Bradley and Atlas appear to be a winning combination: with Atlas still impressing as a world class trainer despite a few years out on the coaching sidelines and Bradley apparently willing and receptive to his new trainer’s unique approach.

It was an impressive win for Bradley: a man who controversially defeated living great Manny Pacquiao. But, Bradley wasn’t the man who grabbed the headlines on this occasion. With Atlas in his corner barking out orders, it was the fiery coach’s words in before the eighth round which really earned the limelight.

Akin to his days in the 90s, it was a nice blast from the past to see Atlas both coaching at the very top and living up to his form for amusing soundbites. While his rousing speech may have sounded odd to the casual observer, it clearly did something (light a fire, perhaps? Sorry.) as Bradley earned the TKO win over Rios within the following six minutes. Teddy Atlas has still got it.

At 59-years-old and enjoying a run in the commentary booth, Atlas appeared to have disappeared from the mentoring side of boxing altogether after his run with Russian heavyweight Alexander Povetkin from 2009 to 2011. Povetkin enjoyed a good run under Atlas and improved his winning streak by earning five more wins under the American’s stewardship, starting with a KO victory over Leo Nolan and ending with a decision win over tough Uzbek Ruslan Chagaev to earn the regular WBA heavyweight championship.

But, like many of his other professional partnerships in training top-level boxers, Atlas and Povetkin’s relationship quickly deteriorated: mostly due to the fact Atlas didn’t think the Russian was ready to face Wladimir Klitschko while external pressures were trying to force Povetkin the other way. Atlas may well have been correct in this assessment as Klitschko dominated Povetkin to earn a Unanimous Decision victory for the title two years later.

Atlas, a coaching protégé of the legendary Cus D’Amato, has had numerous world class fighters under his wing including the likes of Donny Lalonde, Barry McGuigan and even helped out assisting D’Amato when he was mentoring a young heavyweight phenom in Mike Tyson—a project which saw Atlas expelled from D’Amato’s gym after he had pointed a gun at a 15-year-old Tyson for groping a young relative of Atlas’.

However, perhaps Atlas’ most impressive tutorship in boxing was that of Michael Moorer. His tutelage saw Moorer lift the lineal world heavyweight titles in 1994 after earning a hard-fought Majority Decision win over heavyweight great Evander Holyfield. But, while the Brooklyn brawler Moorer was celebrated for his impressive title haul, Atlas drew the ire of fans and the media for the first time for his outlandish comments in the corner for his world title fight.

The boxing press accused Atlas of trying to draw attention to himself during the fight by asking Moorer if he wanted Atlas to “take over”. The veteran coach rebuked these claims saying he did what was required to help his fighter to win a world championship. You can’t really argue with that. But, this is the moment when Atlas’ out-there character got noticed and his rent-a-quote media obligations became more regular, commentating on Olympic boxing for NBC since Sydney’s sporting showcase in 2000 before becoming the regular color analyst for ESPN’s boxing events as well as EA’s Fight Night series of boxing games.

So it was refreshing to Atlas back doing what he does best. Bradley has already said he learned more in a seven week Atlas training camp than he did under his long-time guidance under Joel Diaz. Bradley initially opted to change coach following on from his decision victory over Jessie Vargas, who landed a big punch in the final round which rocked Bradley to the core. That punch alone was enough for him to seek for a veteran coach.

Atlas is a renowned tough disciplinarian who is often drafted in to try and get the most of fighters who believe their own careers to be stagnating. This could well prove to be a real coup for Bradley as he tries to earn a rubber match against Pacquaio going forward.

A Fight Worth Watching: Carl Frampton vs. Scott Quigg