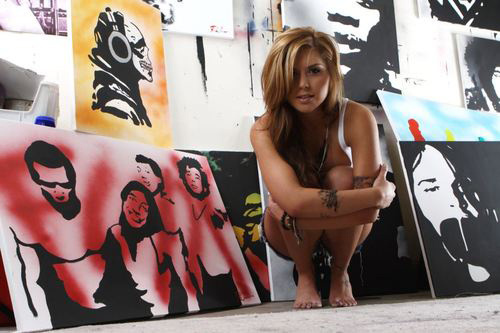 The term “renaissance (wo)man” has been overused almost to the point of losing all meaning. It’s something we casually toss at people who happen to do more than one thing, like actors who have bands or athletes who can write more than their own name.

But the UFC’s Brittany Palmer just might be the genuine article. In addition to her duties as an Octagon Girl, the lovely Palmer serves as a spokesperson for mixed martial arts, thoughtfully and knowledgeably discussing the sport in TV and magazine interviews; she works as a model and recently produced, directed, and funded her own calendar, available on BrittneyPalmer.com; and she blogs about fitness on her site, eschewing the latest gimmicks and trends in favor of science-based research, and is currently working on a book.

And, like any good renaissance person, Brittney knows her way around a canvas. After a lifetime of dabbling in the visual arts, Palmer became serious about painting just over four years ago. In 2011, she actually took a six-month hiatus from the UFC to pursue her passion full time and moved to California to attend art school. Now Palmer happily plugs away at all of her callings, balancing her UFC commitments with her writing, and still setting aside plenty of time to work on her rock and roll portraits and take commissions from art collectors through her site.

We talked to Brittney about her art, her love of rock stars, and how art school helped her prepare for her Playboy spread.

Fightland: What made you decide to get serious about painting?
Brittney Palmer: I was in a car accident when I was 21 years old, and I couldn’t walk for three months without help, so I had a lot of time on my hands. So I was just painting for fun. There was nothing on TV anymore but reality Snookis and I was more interested in music and art and poetry and painting. I painted a really cool picture of Jimi Hendrix, and then I kind of just started painting every different kind of Jimi in every different color, and I just kept practicing.

When I would post them on Twitter and social media, the fans really, really loved it. And the reviews ... I always say it’s like a 70-30 split. You get 30% of people who just don’t like you. You can’t please everyone, but, literally, it was like 90% of people that were responding really loved them.

At the time, I had a job in Vegas, and then I noticed that I was taking off work so I could paint. I stopped hanging out with my friends and going out. I’d rather just be in my art studio and paint. So I think I just kind of came to a realization that that was something I really was passionate about and I loved and I wanted to push forward. 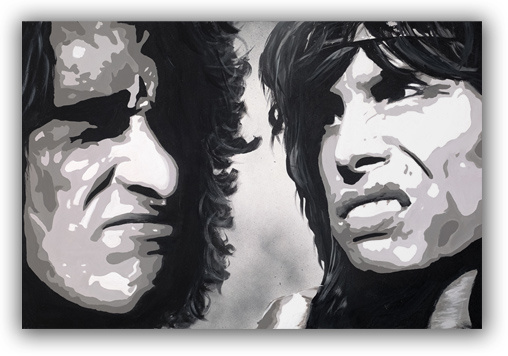 You moved to California and took time off from the UFC to go to art school. What was that experience like for you?
It was really scary. I moved to LA and I started going to two different art schools and to a private art school at UCLA and I was taking four or five classes a week. I was new there. I went on my own. I didn’t have a roommate or a boyfriend with me or anything. So I really wanted to get into the LA vibe and the Venice vibe and the culture there and study art and give 100% of what I have into it. I asked Dana [White] if I could have a couple of months instead of traveling every weekend because at this point we were doing every single show. Every weekend I was gone and I never really got to get a firm foot on the ground. And Dana said, “Take some time and enjoy yourself, enjoy your new area, and come back when you’re ready.” So I took six months, I met some new friends, I got into the Venice vibe and when I was ready, six months later, I shot the cover of Playboy and came back to the UFC.

Before UCLA, you were self-taught as an artist. Was it a challenge to adapt to more formal training?
Yeah, it was. I mean, I learned how to paint through YouTube videos. Going to school was definitely ... it puts you in your place. It shows you what your strengths and weaknesses are and puts you around other artists. Because other artists are very, very critical. And we’re especially very critical on ourselves. There were a lot of artists that were working artists that were in my class. I think putting me in front of them lit a fire so I could really perfect my skill and find my own voice.

Did you feel like you needed to prove yourself? Did anyone try to dismiss you as just a model or an Octagon Girl?
I feel like I have to prove myself all the time, not just in art school. There’s this persona that we’re “The Octagon Girls” and that’s all we do, but no one takes into account that we’re spokeswomen. We’re spokeswomen for the sport. We’re fitness models. We know about the sport. I do interviews on the sport all the time on TV, in some of the biggest magazines in the world, and I know what I’m talking about. I’m not just a girl that holds up a card. I am one of two women out of the entire sport to ever present it. So proving that is always a little bit of a challenge. 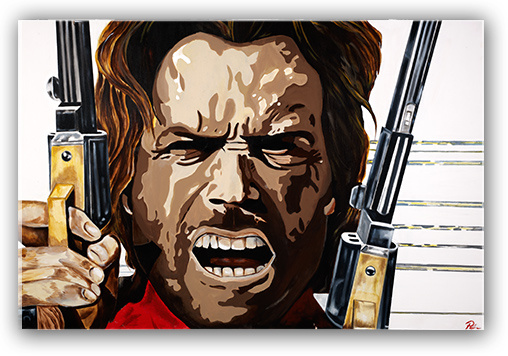 As a model and Octagon girl, you’ve been the subject of a lot of art, particularly photography. Has that influenced your work at all?
I think so. When I shot the cover of Playboy, I was really, really nervous in the beginning.  Like, “Oh my gosh! I’m nude in front of all these people.”  But, as an artist, I take figure drawing and figure painting and there are always nude models. It made me a little more comfortable with the idea of what I was doing, relating it to art. It made my Playboy shoot a little bit more of a pleasurable experience than if I had no idea, or I wasn’t really around any of that.

Do you ever catch yourself at shoots thinking, “I think I could do a better job with one of my self-portraits.”
Are you asking if I ever, at a shoot, think I could paint better than they can shoot? No! No I wouldn’t. I’m very, very critical when I’m painting myself as it is. 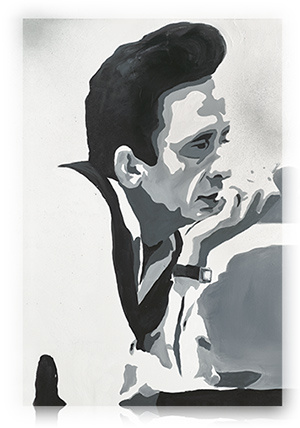 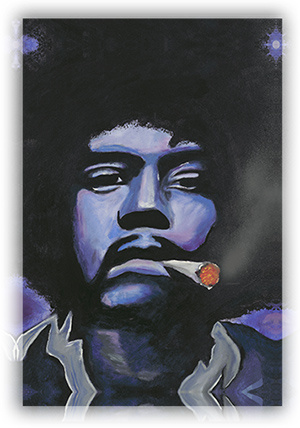 Most of your paintings are portraits of rock stars. What is it about rock and roll and musicians that inspires you so much?
I’m more of a portrait artist in general. I’m very impatient. I can do landscapes, and I can actually do them well, but I’m very, very impatient and little details?--I just can’t be bothered. I think the rock and roll portraits are ... it’s something iconic. Music is the foundation for a lot of things in this world. It doesn’t matter what nationality or what religion, or if you’re a Democrat or a Republican, everyone likes music and they can relate to that. If I paint a portrait of Jimi Hendrix ... dude, everybody likes Jimi Hendrix! He was amazing. He was a rock star. And if I paint Janis Joplin, the Rolling Stones, Led Zeppelin, or Aerosmith, everyone can find something relatable to those paintings. I like to paint things that would mean something and I love music, so why not paint these iconic rock stars?

Is MMA something that inspires you the way that rock does?
I wouldn’t say that MMA inspires me as an artist, but I think there’s something about MMA that keeps me motivated to do everything. I think that MMA has given me the platform to be an artist and it’s given me everything that I have thus far. For that it’s inspiring.

Are there any mixed martial artists that you’d like to paint?
I would love to paint Anderson Silva. I think it would just be a really cool piece and he’s obviously one of the most amazing fighters in the whole world, so he’d be up there.

You can see all of Brittney's paintings here.