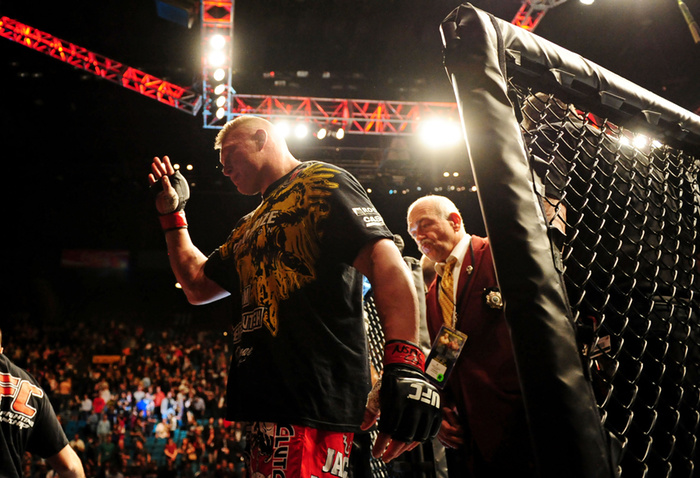 With little fanfare, nor a public comment from the man himself, the UFC confirmed Brock Lesnar has officially notified the promotion of his retirement from MMA, as reported by MMAFighting’s Marc Raimondi.

There was little doubt this was the case. After close to five years on the shelf, Lesnar made his MMA return at UFC 200, taking on Kiwi heavyweight Mark Hunt. Despite his lengthy hiatus, Lesnar impressively controlled all three rounds to take home a unanimous decision win. However, this victory was overturned upon two positive tests for the banned substance clomiphene—one an out-of-competition failure and the other happening on the day of Lesnar’s fight.

As a result, the 39-year-old was handed a one-year suspension by the United States Anti-Doping Agency (USADA) and the Nevada Athletic Commission—the latter fining Lesnar $250,000 for his misdemeanour in addition.

Lesnar would have been eligible to return to the Octagon on July 15th, 2017, with his retrospective year ban commencing from the UFC 200 event. But, his suspension has been frozen—as recommended by the UFC’s anti-doping policy—as he opted out of the testing pool.

It never looked likely that Lesnar would be returning to the Octagon any time soon and with his ban suspended for whenever he opts back into the USADA testing pool to compete in the UFC again, the possibility of another dabble in MMA looked even more unlikely—the UFC announcement was just confirming the inevitable.

Lesnar’s duo of failed tests undermined the UFC’s anti-doping policy in tandem with USADA, with the system coming under intense scrutiny. Lesnar’s out-of-competition positive test was failed before his UFC 200 bow and the results didn’t materialise until once the event was over—essentially rendering the test useless in the policy’s attempts to protect drug-free competitors from fighting those using performance enhancing substances.

The uproar caused by this transgression even prompted Lesnar’s opponent Hunt to sue the UFC for what he perceives to be purposeful carelessness to allow Lesnar—inarguably one of UFC 200’s biggest pay-per-view attractions—compete on their bumper bicentennial event.

Lesnar, meanwhile, resumed his WWE run after his brief return to MMA. The Minnesotan is presently locked in a professional wrestling feud with former NFL defensive tackle Bill Goldberg and both wrestlers are expected to lock horns at WrestleMania 33 in April.