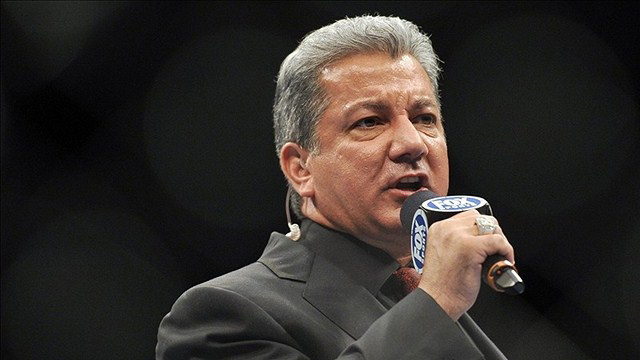 MMA fans with time on their hands, gaming in their hearts, and $10 in their pockets have three days left to sign up to be beta testers for a new online video game that’s being put together by UFC announcer, author, and entrepreneur Bruce Buffer called MMA Federation. And for those for whom that $10 would be their last $10, there’s no need to worry: Any money you spend now will come back to you in the form of virtual currency and backer-only content once the game actually gets released later this year and you become obsessed with it and don’t have time to leave your home to buy things anyway.

From the recruitment of citizen beta testers to its use of the online fundraising site Kickstarter (the game is currently three days and £8000 away from its initial £100,000 goal) to the nature of the gameplay itself, MMA Federation is shaping up to be the most populist MMA game option around—a giant leap beyond fantasy leagues and a reflection of the deeply democratic, communal roots of the modern-day promotional and creative experience. Whether you believe in the legitimacy of fan-funded movies, albums, art projects, and video games or believe the whole thing is a way to get people’s money both coming and going (and regardless of how skeptical you are of the process after hearing that millionaire filmmakers like Spike Lee and Zach Braff funded future projects through Kickstarter), Buffer and his team are smart to tap as far into early fan participation as they can. In a world where the 85 richest people have as much money as the bottom half of the entire global population, and the proliferation of cookie-cutter shopping malls populated by the same big-box stores has all but destroyed the entire notion of small, privately owned ventures, maybe the revolution isn’t coming in the form of guns and barricades but rather communal citizen projects—like, say, the development of a video game for, and by, people who like cage fighting.

Don’t get me wrong: I have no idea if MMA Federation is going to be good or bad; only our beta testers can tell us that. I’m just saying that its devotion to the ideals of citizen participation at every level of development and its gaming structure—players become professional fighters, join fight teams, train with other players and professional coaches, learn new techniques, and fight, all in the hopes of winning points that unlock real-world rewards, like memorabilia, tickets to events, and “VIP experiences”—is enough to convince me that the game is at the very least timely.

And I find the whole thing heartening—this notion that fans of a game would be involved in the production of a game from the ground up has a utopian air about it. Or maybe it’s just the inevitable and necessary reaction to certain plutocratic realities: the cry of the non-super wealthy—we are here. Then again, maybe not. Maybe Kickstarter campaigns and beta testing are just ways to exploit unpaid (or rather, paying) labor while preying on the hopes and interests of future customers. Nothing sells like the idea that your input and voice might actually be heard, and nothing is as thrilling as knowing you’re participating in something, even if that participation comes as a price. But at what point does an unpaid internship become just unpaid labor? And what happens when the Huffington Post approach to writer pay becomes the dominant one? Is it really reasonable to pay people in the form of the simple opportunity to be involved?

“I wanted creative control to really take fan participation to a new level,” Buffer says about his game, and I believe him. There’s no reason for me to be cynical about him or MMA Federation. After all, the entire idea behind the game is based on fan participation, and why shouldn’t that extend to all parts of the game—from funding to testing to playing? Maybe it really will be as populist as advertised. I just wonder about the sustainability of a model where the buyers of media are involved (both creatively and financially) in both its development and its consumption, and the bottom 99% of the world’s population are not only forced to scramble for 50% of the world’s wealth but also have to pay for the chance to do so.