Bukom, Boxing and Beyond: An Evening Training Session in Accra, Ghana 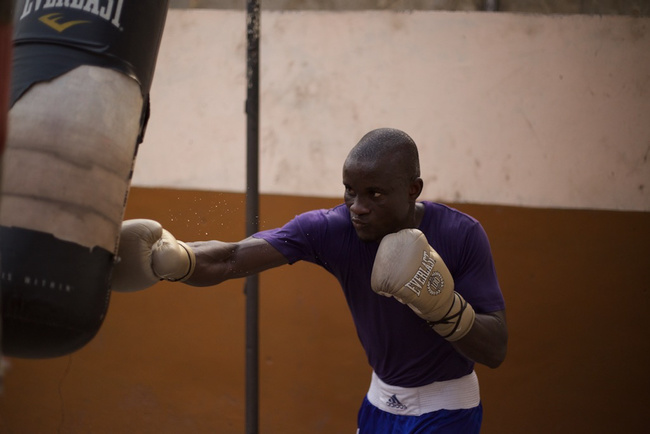 Photos and words by Ed Berry

It’s late afternoon on Wednesday in the Ghanaian capital of Accra, West Africa. In the small district of Bukom, part of Accra’s old town and a stone’s throw but metaphorically a world-away from the bustling city center, a tiny outdoor boxing academy, one of 40 in the area, is a sanctuary of quiet routine and discipline amid the city’s helter-skelter urban environment. In a small courtyard dotted with makeshift and battered training equipment the 23-year-old Abraham Osei-Bonsu begins his warm-up; shadow boxing his way round a fading circle painted on the concrete floor, working up a sweat. The air is dense with the sounds and smells of Bukom—roasted plantain and fried fish from the nearby Jamestown fishing port. Women sit nearby chatting and getting on with their daily business, whilst younger boys watch on eagerly, waiting in the ranks. One of them, Alex Yartey, 12, hauls in heavy bags and other kit needed for today’s conditioning training at assistant coach Prince’s instruction. 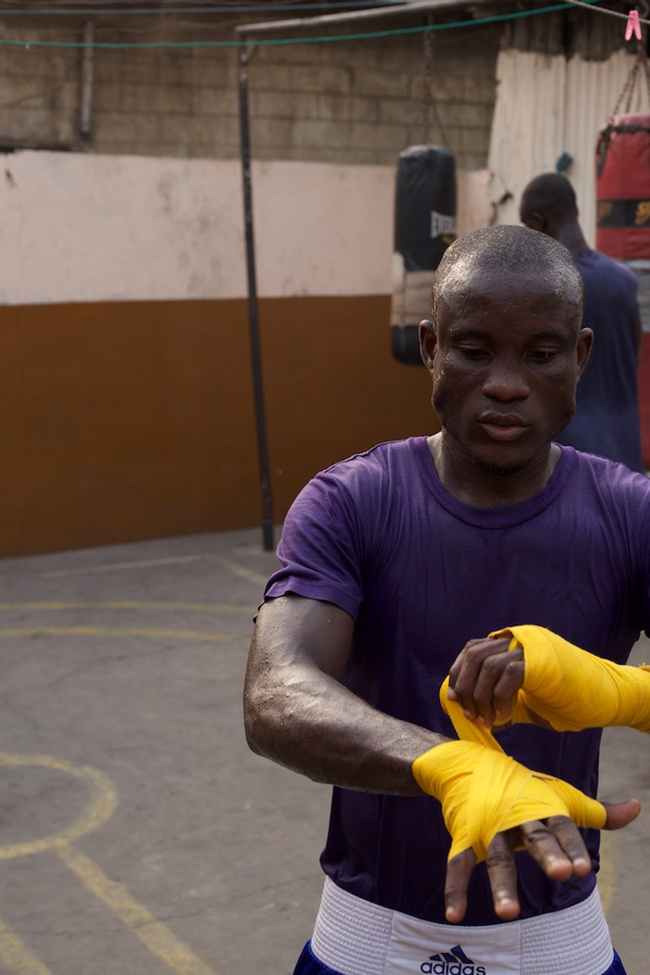 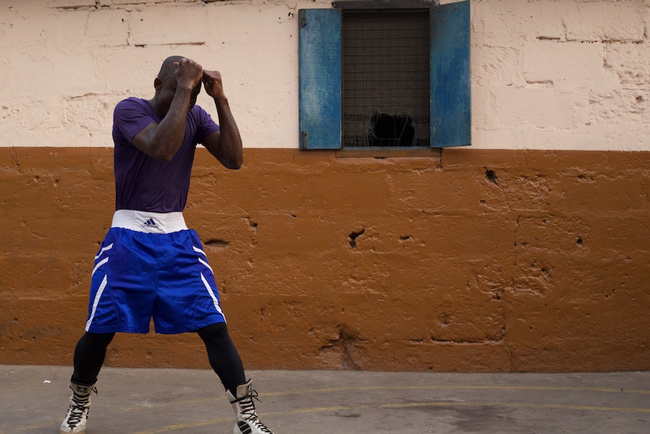 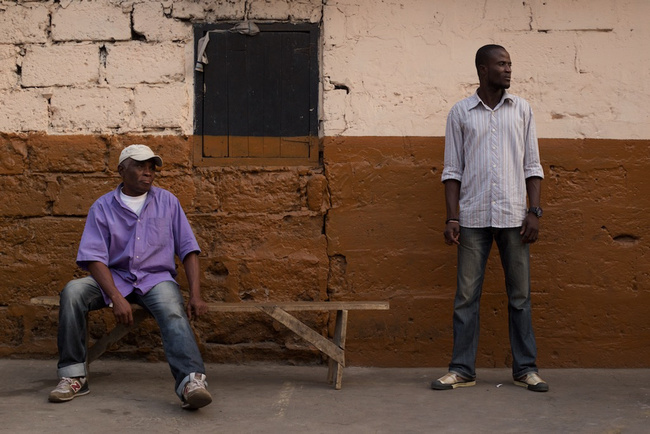 The undefeated Osei-Bonsu currently sits atop the Ghanaian super-featherweight division, holding the national title. In the near future he hopes to take the next step in his career and fight for the Continental title. Despite its size, Bukom has produced more than its fair share of the world’s best boxers in recent history: David Kotei, Azuma Nelson, Ike ‘Bazooka’ Quartey, Emmanuel and Joshua Clottey to name just a few. 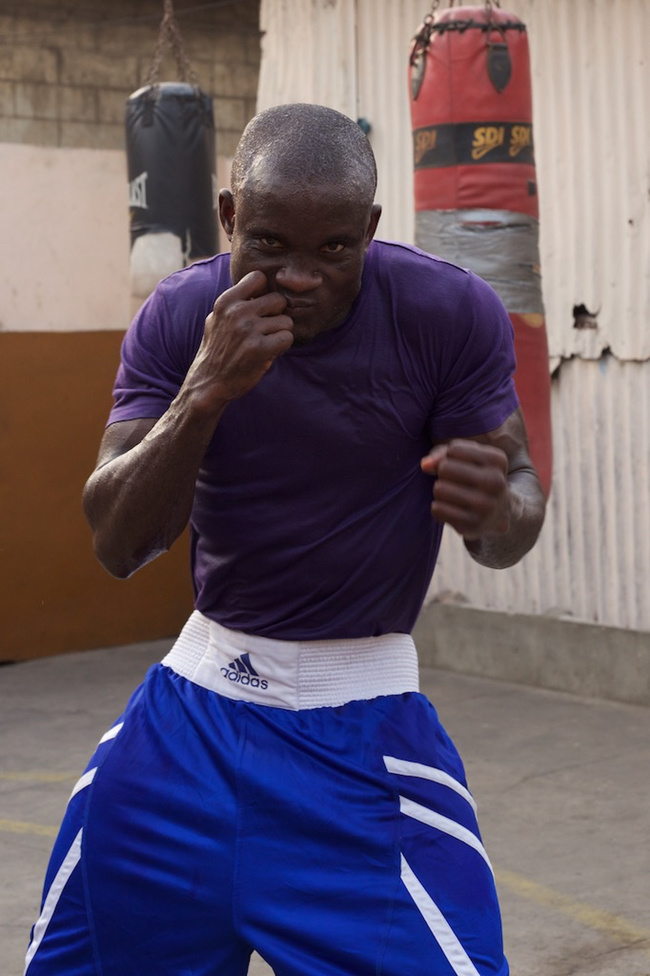 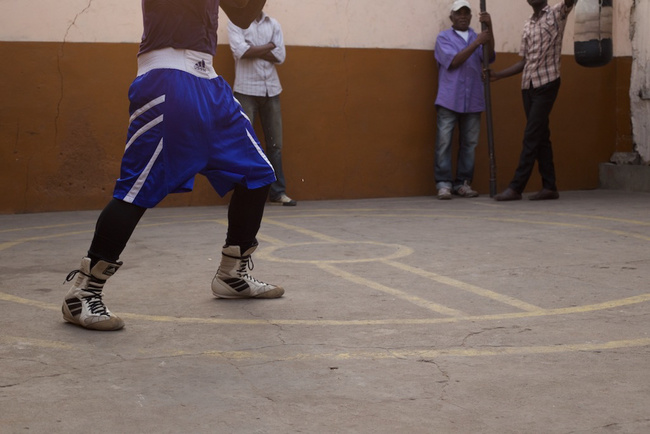 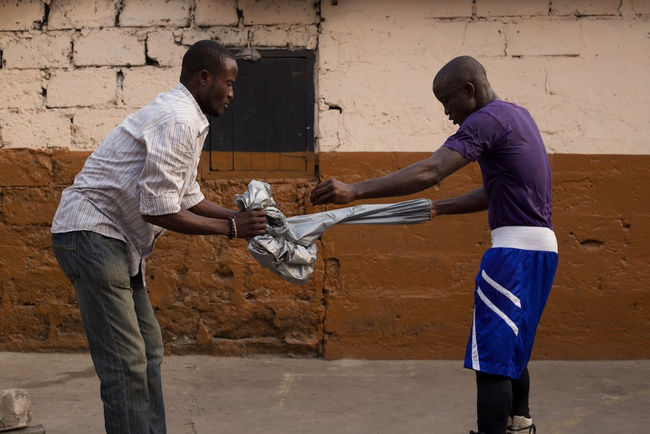 As training continues, head coach Sui Quartey, elder brother of Ike, occasionally demonstrates compact technical refinements for his young pupil’s benefit. Between the staccato thud of gloves hitting the heavy bag, an argument among local women can be heard coming from a nearby alleyway. Disagreements among the primarily Ga people of Bukom have historically been settled in pugilistic fashion, perhaps going some way to explain their affection for the sport of boxing and their continued success on the world stage. 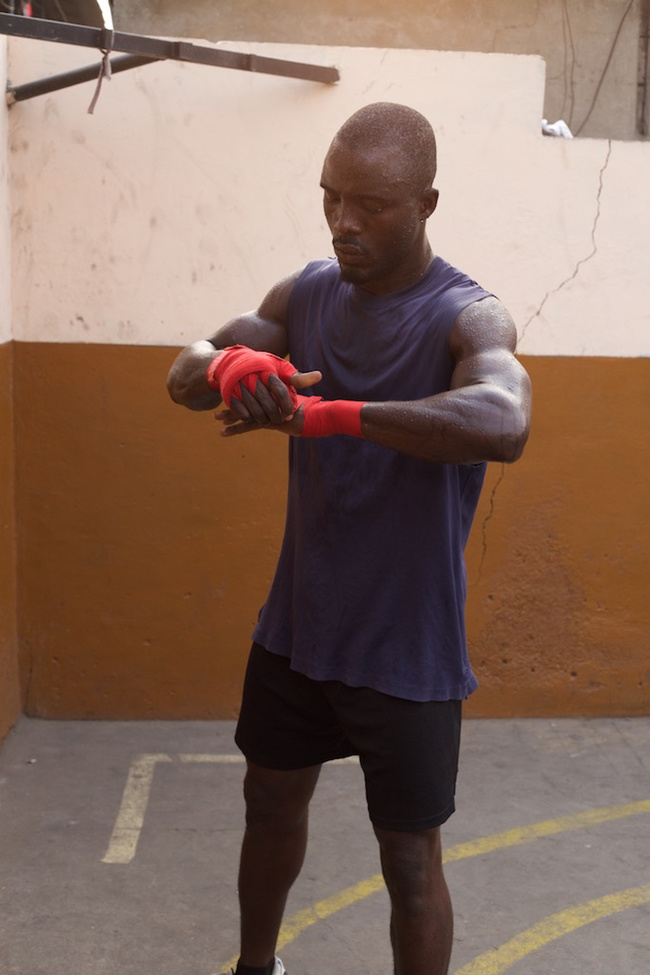 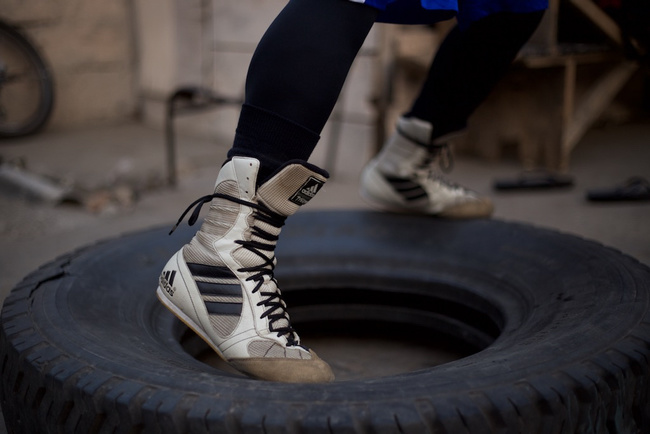 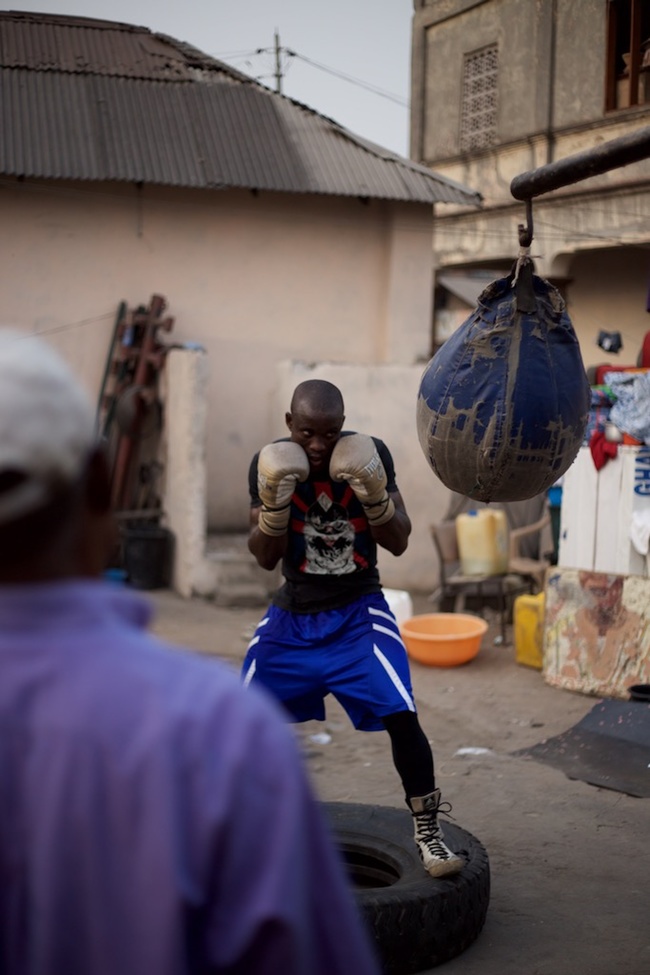 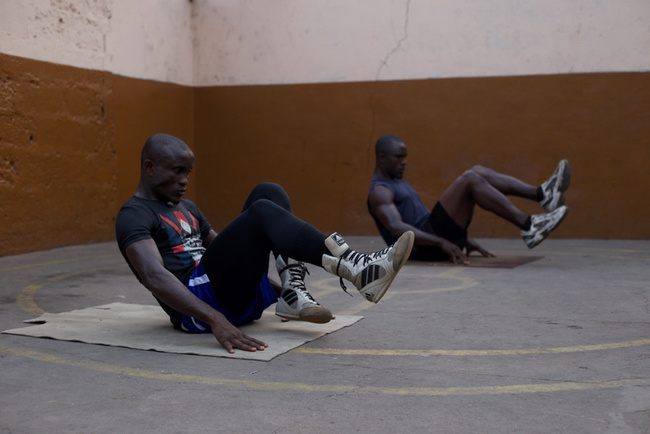 As the session winds down, evening beckons and with that mosquitos increase in number as they hover ominously above the action. Abraham and his training partner Abednego Newman, 22, conclude with a series of rhythmic, isolated movements performed to a three-count. The day’s work done, Osei-Bonsu and Newman join hands in prayer. 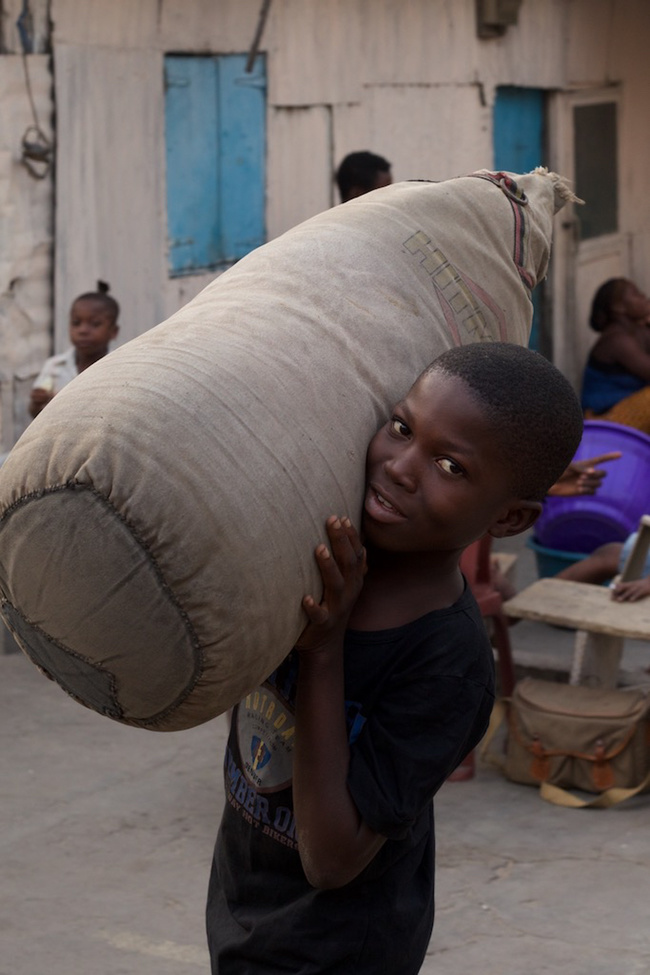 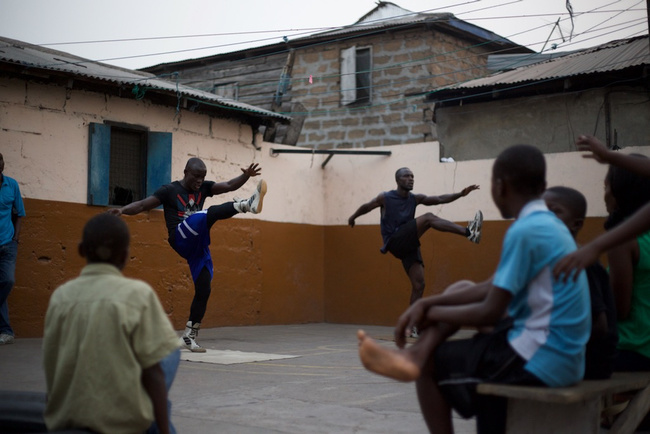 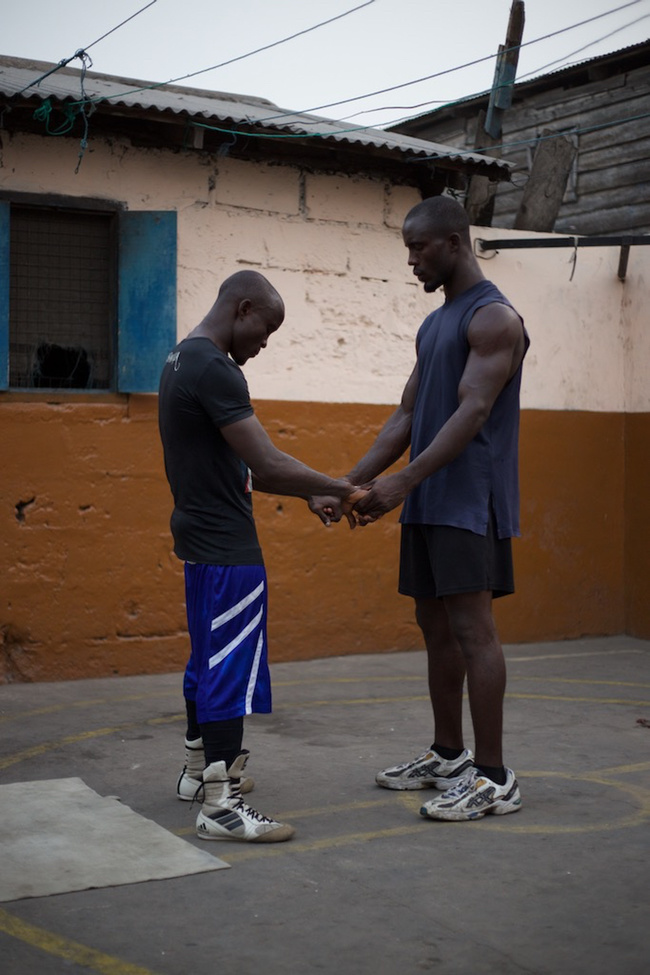 See more of Ed Berry's work on his website.

Check out these related photo sets: