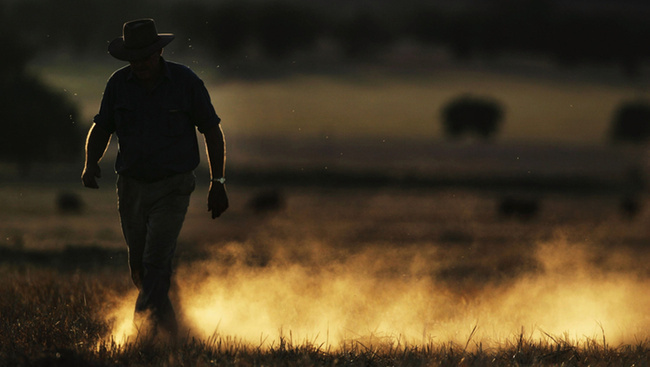 Terry Wicks is a professional hunter, a former bull-riding champion turned tent boxer, and is now a professional Thai boxer. He runs a Thai Boxing and MMA academy in one of Australia’s many small towns, with a population of under 1,000 people.

Terry was my introduction to small town living. In hindsight, I’m ashamed that I held some prejudice to small town folk and with it, small town life. Sure, I know there is beauty in country life—the community, the camaraderie, the tranquility, and the good old-fashioned hard work. But in my big city mind, the beauty is coupled with ignorance, alcoholism and memories of the film Deliverance.

When my brother called me from Thailand to tell me he’d made friends with some country boys, I didn’t think much of it. He informed me (he never asks me) that we would be visiting for a hunting trip and to exchange some techniques.

Then he sent me a picture of him and Terry, complete with his rat-tail and missing front teeth. Well, one trip led to fifteen trips as I realized how little I knew about the country and the wonderfully rich folk that inhabit it.

“People always think that country people are unintelligent because of [how they are depicted in] movies. Wolf Creek did nothing to help tourism. People are always shocked at how worldly country folk can be when they come to our town. We often pass the time by watching documentaries, reading, and debating. Cheap flights have also made it easy to travel to places our parents could only dream of,” Terry hypothesizes.

Driving into Coolah, New South Wales is just like you would expect it, one grocery store, one pharmacist, one butcher, one baker, one Chinese restaurant, and two pubs. We touch down at Terry’s and immediately our big city anxiety kicks in and we want to “do something.” Terry tells us to relax; we have time and nowhere to be. So we eat. Terry looks at us like we are aliens, a look that will be repeated ad nauseam.

There is a lot of free time when you are in the country. It seems like such a precious commodity when you come from the city, but to country folk it’s not something that seems to be on their mind. We are bored within five minutes and unequipped with the skills to deal with it, so we get on our phones. Terry sighs.

Terry says that besides farm work, most of the guys pass the time with hunting, drinking and recreating Jackass stunts.

So what made him different?

“Although we don’t think too much about time, there is certainly the frustration of the isolation. Even the nearest movie theater is an hour away, so most of the kids turn to drinking, and drinking leads to shenanigans. In the country you start everything young. By the time I was 14, I was drinking regularly, chasing women, and blowing things up with my friends.”

“Basically they show up and the whole town goes to match their fighters. Everyone is pissed (Aussie slang for being drunk) and they throw you in the middle to fight. There were no weight divisions, no referee, and no real rules. I thought to myself ‘this guy can’t hit harder than a bull’ and jumped in. He was 20 kg’s (approx. 45lbs) heavier and I lost by decision. I was hooked!” 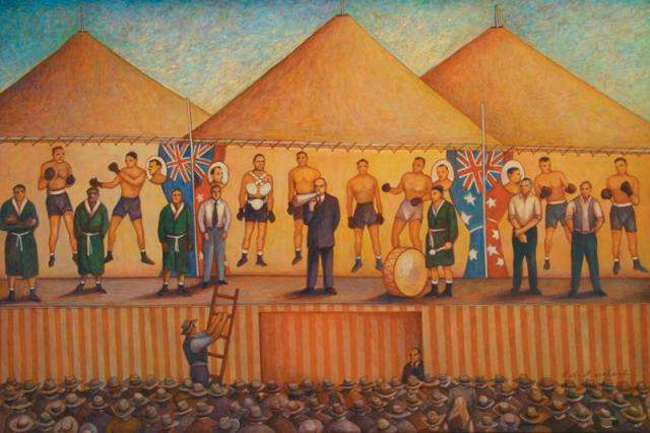 At the time, Terry was still a professional bull-rider, starting at age five, and he says that it wasn’t so much a choice; it was just something that the males in his family did.

“People always ask me how I could do it, they think I’m crazy. When you start so young, you are just riding a little sheep. Slowly the ride gets bigger and bigger and you find yourself on a giant snorting monster without even noticing it. It’s pretty much in my blood.”

Bull-riding took Terry all over Australia to the envy of his friends, and his curiosity was peeked by the big world outside his little home. Offers began to come in from the American circuit and he was on the verge of a real career in the sport, but something was nagging him.

“Bull-riding was just something I was born into, fighting was something I loved. I wasn’t thinking about Muay Thai just yet, but after losing my first tent boxing bout in front of the whole town, I decided that was going to be the last time.”

Terry started training in the art of boxing and as you can imagine, just like everything in the country, it was tough. Already missing his front teeth from a particularly feisty bull named Boris, Terry realized quickly that there was more to pugilism than just being tough. By the time the next tent show came around, he was more than ready.

“I was probably the only guy wearing a mouth guard and not wheezing after the first minute. Although my opponent was still much heavier than me, I beat him on heart and forward pressure. The feeling of victory in combat against another man, it’s more addictive than anything I’ve ever felt in my entire life.”

There was one set of eyes in the crowd that was watching Terry with particularly keen interest, the promoter of a local Thai boxing promotion. The show would travel from town to town pitting local bull-riding champions turned Thai boxers against one another. He approached Terry, who of course quickly signed up.

His first fight didn’t go exactly as he wanted it to. Again at a weight disadvantage, Terry quickly realized he knew nothing about the art of 8 limbs. Although his opponent couldn’t stop him, he handily beat him on points.

He booked his ticket to Thailand the next day. 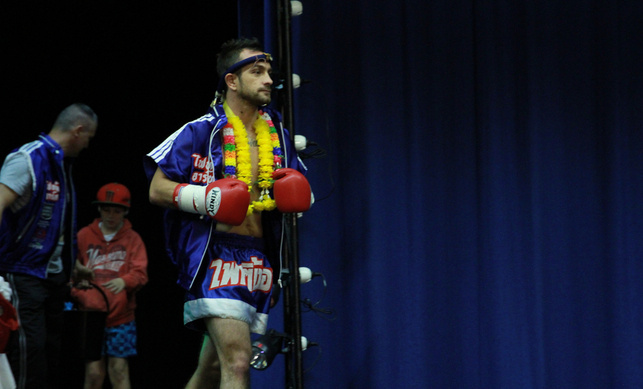 “Travelling to Thailand was life changing for me. It was such a culture shock!

I was actually terrified, the only knowledge I had of the country came from the Van Damme movie Kickboxer. The smells, the smiles, and the sheer number of people around me, I didn’t want to leave my hotel room!”

Terry explained that it’s not uncommon for country folk to go for days at a time without speaking to another soul. They can often experience anxiety stepping into the hustle and bustle of the city, an intensity they aren’t familiar with. It took him some time to gather the courage to leave the isolation of his hotel and venture out into the crazy streets of Bangkok.

“I slowly eeked my way into a camp and was overwhelmed by the smiles and the warmness of the Thai people. I was instantly hooked on not just the art of Muay Thai, but also the culture of Thailand. The food, the fun, and the people were like aliens to me. I went back every year after that.”

His years of bull-riding made him a natural in the Thai clinch wrestling, and the locals were impressed with his sheer tenacity. He would show up to training in the morning and be the last one to leave at night. The Thai’s loved the pocket rocket from Australia and gave him extra attention. 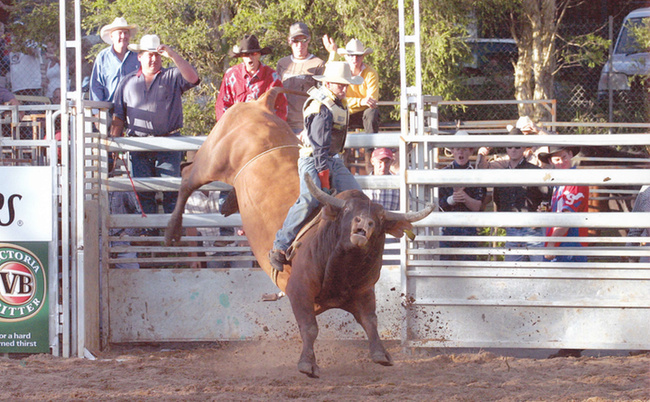 “People always ask me if Thai boxing is easy thanks to my Bull riding career. The answer is ‘no way’. In Bull riding, you are challenged by a snorting beast that wants to gore you. In Muay Thai, you are fighting the snorting beast inside you. It’s a completely new challenge and one that still terrifies me.”

When he arrived back home, he dove head on into the sport, amassing over a dozen fights in a short period of time. His propensity to never turn down a challenge meant that his record suffered, as he fought people way out of his weight and experience bracket.

“Dylan thought I was nuts, I didn’t really understand the concept of a ‘career’ in Muay Thai. I just wanted to fight and train. Dylan was the first person to tell me that I wasn’t a coward if I said ‘no’ to a fight that didn’t make sense.”

“Okay so it took a little bit of convincing (laughing),” Terry recalls fondly.

When they arrived back in Australia, Dylan would visit almost every weekend, despite the five-hour drive. It was a relationship that would change both of their lives, particularly for Dylan in the wake of his retirement from fighting.

“When I retired from fighting I didn’t know what to do with myself. I had all this energy and nowhere to put it. I could barely sit still.”

On one of his trips to Coolah, Dylan met some young guys that Terry had been training, and saw the difference that he was making in their lives. Inadvertently, Terry had become somewhat of a town hero. Dylan encouraged him to open a school and offered his assistance.

“People told me it couldn’t be done, that we don’t have the numbers to support it. But by the first month we had over 20 people every night, sweating together in the name of Muay Thai and hard work. People were putting down the tinnies (beers) and loving it.” Terry says with some clear delight.

Terry on the other hand convinced Dylan to give bull riding a go. After dislocating his shoulder, Dylan was convinced that Muay Thai was a lot safer.

In Australia, it is a compulsory Visa requirement to work on a farm for a few months. While some may curse the inflow of foreigners into their small town, it’s been a blessing for Terry. Visiting fighters from England, Sweden and Germany have spent months at his gym training and sharing their knowledge of Muay Thai, and stories of their country, enriching the local’s lives.

Terry has slowly built the Academy to cater for women, children and a small team of fighters. He believes that the competition transformed his life, and win-or-lose, it gives the local youth a cause, filling a void that would otherwise be filled with alcohol. So he encourages those who are willing to give it a go.

In his spare time, something that is becoming a rare commodity between teaching, training, and hunting, Terry still helps out at the Bull-riding competitions working as a “clown” to distract the bulls from goring the downed riders.

“Life has a funny way of working. The only thing I’ve ever had going for me is that I never say no to anything, particularly if it scares me. That on it’s own has taken me to places I never thought a little country fella could go. I have to admit I’m a little worried where it will take me, but so far, so good!”