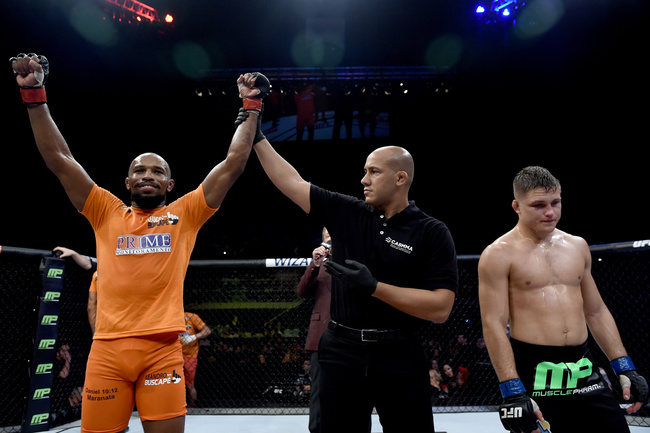 On Monday, we reported that referee Eduardo Herdy’s ruling over last Saturday’s combat between Leandro Buscapé and Drew Dober would most likely stand as a win for the Brazilian fighter.

A scandalous and ridiculous decision during the preliminary card—the Brazilian referee stopped the fight when Dober was in a position that skilled, professional fighters, as UFC fighters often are, can easily get out of—it has made waves throughout the mixed martial arts community, prompting UFC president Dana White to condemn Eduardo Herdy. If you missed the fight, Buscapé was able to lock down a guillotine, but as the American was about to make his escape, Herdy called it a fight and granted it to his compatriot.

After the fight, White said he hoped that the Brazilian Athletic Commission of MMA (CABMMA) would overturn the decision and deem the fight a no-contest. He also said that they would pay Buscapé his win bonus, but that everyone knows the call made wasn’t the right call to make.

CABMMA’s operations director, Cristiano Sampaio, explained that here are only three ways in which that decision could be overruled. One of those cases would be that the judges’ scorecards were miscalculated. The other scenario in which the decision could be overturned would require there to be collusion between judges, i.e., the judges had a predetermined result—shady business. The third scenario requires there to be a wrongful interpretation of rules by the referee.

Following White’s statement, which also said this might have been the biggest mistake in the history of MMA, Sampaio said that nothing had been defined by the organization, but that most likely the fight would remain as a win for Buscapé. This is because, according to Sampaio, there was no misinterpretation of the rules.

But as of the past few hours, the CABMMA has announced that they have reverted Herdy’s decision and deemed the fight a no-contest. According to the organization’s statement, they analyzed the fight and they’ve decided the referee made a mistake, in good faith—in other words, there wasn’t any collusion or shady dealings.

The Commission also highlighted Herdy’s professionalism, who recognizes the mistake he made. Dana White applauded the CABMMA, saying thanking them for doing the right thing by changing the result of the fight.

Decision for Dober vs. Buscapé Will Most Likely Be Upheld

Being Big John: My Attempt at Refereeing an MMA Bout