Can Dominick Cruz beat TJ Dillashaw and the Injury Bug? 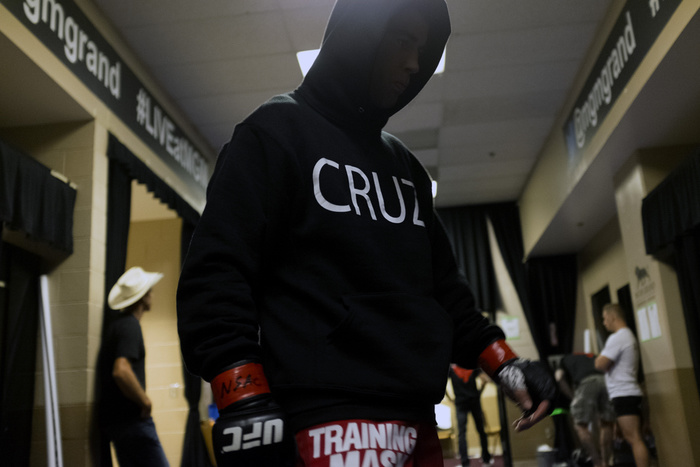 Dominick Cruz is probably the greatest bantamweight mixed martial artist of all time. Considering that these days, we only ever see him behind the analyst’s desk on FOX, that’s an easy thing to forget, but really there’s not much room for debate in the matter. When it comes to dominance at 135 pounds, he simply tops the list.

A quick refresher course for those with short memories:

Cruz entered the limelight as a member of the WEC roster where, despite a slip against Urijah Faber in his debut, defeats of fighters like Charlie Valencia, Ian McCall and Joseph Benavidez eventually earned him a shot at the bantamweight title. He went on to win that title, and when the UFC absorbed WEC, was crowned the first ever UFC bantamweight champion. In that role, Cruz bested Urijah Faber (avenging the only loss of his career in the process) and Demetrious “Mighty Mouse” Johnson—and he hasn’t lost since!

But wait... then why is TJ Dillashaw the reigning bantamweight champion?

Well, any fight fan who hasn’t spent the last five years on Mars knows the story. BJ Penn’s kryptonite was Frankie Edgar. Anderson Silva’s was Chris Weidman. Cruz’s kryptonite has been injury. Yes, despite being a finely-tuned professional athlete, the once dominant bantamweight seems to have a harder time staying healthy than Kenny from South Park.

Since defeating Mighty Mouse on October 1, 2011 he’s fought just one time, decimating Takeya Mizugaki at UFC 178 late last year. Other than that brief burst of brilliance, he’s been strapped to the stretcher by a baffling barrage of injuries: first an ACL tear, then a rejection of the cadaver graft used to replace that damaged ACL, then a groin injury, then a second ACL tear in the other leg. During that stretch, Renan Barão was crowned the interim bantamweight champion, and later the undisputed champion in an effort to keep the division moving. Barão was then, in turn, smashed by TJ Dillashaw in an upset for the ages, and all the while Cruz watched on as the division he once ruled moved on in his stead. It must have been heartbreaking for him. It sure was for his fans.

Well, after years of waiting, Cruz fans finally have a reason to rejoice again. Earlier this week it was confirmed that the former champ is in good health, and better still, that he’s penciled in for a title shot against Dillashaw at UFC Fight Night 81 on January 17. Of course, one has to wonder what kind of cosmic heights he could have reached had been active and injury-free this whole time, but that is an impossible thing to discern. Instead, all we can do is watch as he attempts to regain the title that he never actually lost.

Of course, against Dillashaw, Cruz will have to bring his A-game and more—ideally a baseball bat or a golf club. The reigning champion is a force of destruction. He’s fast. He’s powerful. He’s versatile. He works at hellish pace. He’s one of the few fighters alive who can rival Cruz in the footwork department. And finally, thanks to the tutelage of Duane Ludwig and an unrivalled work ethic, Dillashaw grows more brilliant by the day. Yes, the current champ represents a tough test for any bantamweight alive, even the former champ, and considering the long stretches of inactivity behind Cruz, that’s an even firmer fact.

It is also abundantly clear that Dillashaw is not the only opponent Cruz has to defeat if he wants to win back the title. In fact, Dillashaw isn’t even the first. If Cruz wants to make it to his title fight with the champ, he’ll first have to best an old foe—and that’s the injury bug. If he can’t stave off this former nemesis, his title dreams will be dashed before they even begin.

Yes, Cruz has two towering hurdles to clear before he reclaims his glory: one stands 5’6 in fight shorts and a gold belt, and the other sends you into surgery. If anyone is capable of passing these treacherous tests, however, it’s him. Let’s not forget who we’re talking about, after all. This is a fighter with a 20-1 record, who has avenged his only loss and beaten some of the finest fighters ever at bantamweight and below. This is a former champion with five defences to his reign. This is the best bantamweight the game has ever seen. So, while it’s true that Cruz’s making it to January 17 unscathed and his besting the ever-evolving Dillashaw seems unlikely, it’s certainly not impossible.  2016 could well go down as the year that Cruz regains the throne.

But hey, let’s cover the guy in bubble wrap till fight night just in case.

Betrayed Again by His Own Body, Dominick Cruz Hands Title Shot to His Worst Enemy