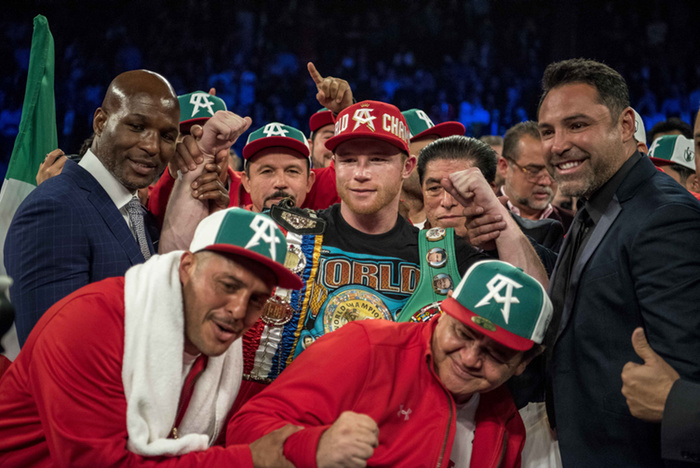 There were few surprises in the fight between lineal middleweight champion Canelo Álvarez and Amir Khan this past Saturday night as the Mexican superstar went on to win as expected via devastating KO in the 6th round. Perhaps what was somewhat surprising was how well the former welterweight performed in the rounds previous.

Given that Khan had been out of the ring for 344 days, some ring rust was likely to be expected, but in the first three opening stanzas, Khan gave a solid showing of himself, controlling much of the fight from the outside, and edging the rounds on points due to superior hand-speed. At certain moments, the Brit would even elicit a number of “Oooh’s” and “Ahhh’s” in the crowd from landing hard combinations on the inside, though overall the punches appeared to bother the champion only a little more than a mosquito bite would.

Álvarez, who was reported to have 27 nephews and nieces sitting ringside, began closing the distance as the fight drew on, and his signature left hook began finding a home. It soon became apparent that Álvarez was also following the textbook strategy of breaking down the body to bring down the head, as the percentage of body blows began to increase with each round and as the quicker Khan noticeably slowed down. The end came with 23 seconds left in the 6th as an extremely crisp, clean and devastating straight right hand knocked Khan out cold.

In an aesthetic show of good sportsmanship, Álvarez dramatically dropped to his knees near Khan’s head right after the KO, though practically speaking, that gesture could have been potentially dangerous given the likely head trauma Khan had suffered the moment previous. After a few minutes with professional medical attention, the Brit was back up and fully recovered. While the outcome of the bout offered nothing outside the expected, the post-fight interviews that followed certainly did.

In his interview, Khan wasted little time to mention the fight boxing fans are really anticipating, that of course being the showdown between Álvarez and Gennady Golovkin.

“I mean I’m one of them fighters. I’ll step in the ring with whoever, and I think it’s time now where Canelo needs to step in with GGG and everyone’s been waiting for that fight,” said Khan.

Shortly after, Khan’s trainer Virgil Hunter raised his hand to chime on the matter as well.

“[Khan] took the risks. He gave up everything. No concessions,” said Hunter. “Now it’s time for [Canelo] to take the risks and quit hiding behind little stuff, okay? Amir took the risks.”

HBO analyst Max Kellerman then asked why Álvarez taking on GGG was important to Khan and his team, since presumably that fight really has nothing to do with them. Hunter had his response ready.

“Because he set the tone, Amir set the tone. Fighters should fight each other,” said Hunter. “We’re setting the tone. [Amir] took the risks. He did it. [Canelo] got to quit hiding behind the flag and fight Triple G.”

While a losing fighter prompting his victor to take on another opponent is not unheard of, it certainly isn’t common. Of all the boxing I’ve seen in my life, this is one of the few times where I’ve seen fighter and trainer spend up to 80% of their post-fight interview vigorously talking about a fight that wasn’t a rematch. It almost feels as if Álvarez’s tactics of negotiation was such an offense to the sport that both Khan and Hunter were compelled enough to comment on it.

In the defense of Álvarez, he did address the potentials of the GGG super-fight during his own interview.

“I invited [Golovkin] into the ring,” said Álvarez, referring to when Golovkin and his trainer Abel Sanchez entered the ring almost immediately after the KO. “Like they say in Mexico, we don’t fuck around. I don’t fight for rings and stuff like that. I don’t fear anyone. We don’t come to play anyone. I don’t fear anyone in this sport.”

Kellerman then asked if that meant he would fight Golovkin.

“As I said in the last fight, right now I’ll put on the gloves again,” Álvarez responded.

That is probably the most direct response that Álvarez has given since the super-fight was first proposed. During the post-fight presser, media inquired further into the matter, most notably on whether or not the fight would be fought at the 155-lb catch-weight that Team Canelo had previously insisted.

To translate that from ambiguous post-fight interview lingo: “Yes. The weight is likely to be an issue during negotiations.”