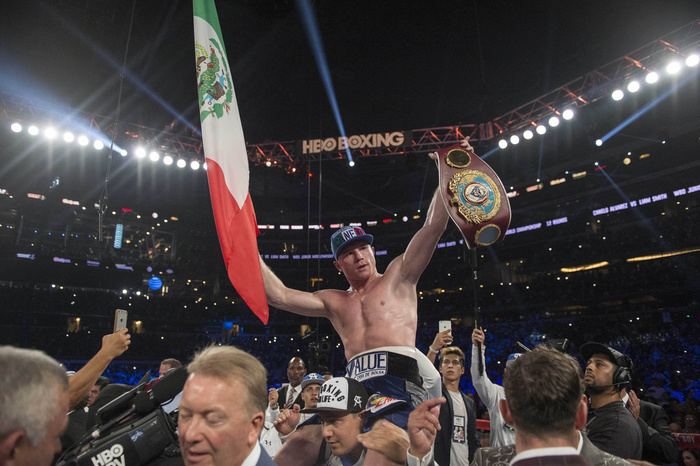 Mexican boxing star Saul “Canelo” Alvarez simultaneously proved both his star and punching power as he put away plucky Brit Liam Smith to earn the WBO light middleweight title from his embattled foe.

In spite of facing an unheralded world champion in Smith, Canelo’s name alone managed to attract over 50,000 spectators to part ways with their hard-earned cash to watch him win another world title at AT&T Stadium—the home of NFL powerhouse the Dallas Cowboys—over the Mexican Independence Day weekend and only the tiniest smattering of fans present will have left disappointed.

Often accused of being a tad hesitant in the early rounds, Canelo was aggressive from start to finish—exemplified by the CompuBox stats which recorded 30 power shots courtesy of Alvarez in the opening frame to Smith’s meagre offering of six.

Much of the best work from Canelo came through his body of bodyshot work. Smith was keen to return fire back to the abdomen of his opponent, though you couldn’t help but feel those punches being thrown from the challenger carried a lot more clout than those of Smith.

The Mexican looked fairly comfortable throughout the fight and handed Smith the first ever knockdown of his professional career in the seventh round. Pinned against the ropes facing a surging Alvarez, Smith couldn’t avoid the big right hand of Canelo’s which sent him down.

Smith’s knockdowns were like London buses—you wait plenty of time for one and then two arrive at once. The following round saw Smith endure another knockdown: this time through a crude-looking bodyshot which cut the Liverpudlian down to size.

It was another bodyshot in the ninth round which sealed the deal for Canelo. Following a frenzied flurry that drove the Scouser to back up on the ropes once again, Alvarez buried Smith with a sweet left hook to the liver which ended the Englishman’s night. Smith was brave and courageous throughout the contest. However, Canelo’s slickness, accuracy and pure punching power overawed the Brit. 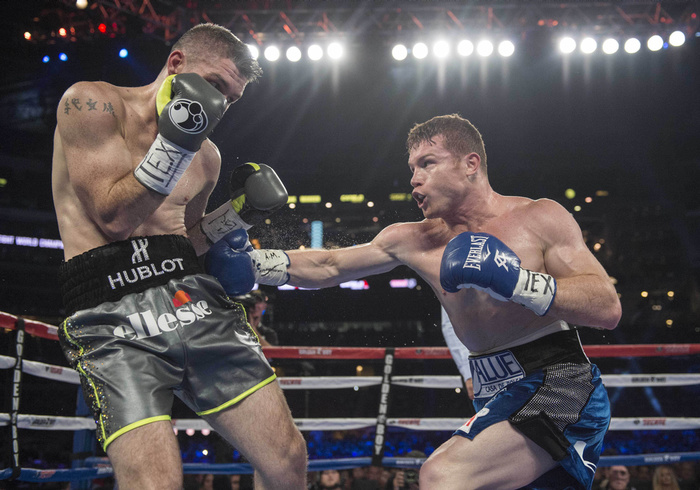 This was Smith’s first defeat in his 25-fight career. "I started controlling him, but in the second round I hurt my (right) hand and I had to use my left more often," Alvarez told HBO after the fight as transcribed by CBS. "He was very strong in the beginning and I had to put the body work in. I felt he would dwindle." That he did. A forlorn Smith told the broadcaster: "I was slow. He took the body shots well and he landed his own."

The competition wasn’t stellar, but Canelo impressed nonetheless. In fact, Roy Jones Jr. had nothing but glowing praise for Alvarez on the HBO broadcast. “I’ve never seen him no better than that,” said Jones a former four-weight champion in his own right. It was a very professionally fought fight. I’m very proud of him.” Ineloquently put.

However, rather than celebrating Canelo’s third light middleweight world title to compliment his WBC middleweight championship in the weight class above, you can’t help but wonder what could have been with both Alvarez and Gennady “GGG” Golovkin fighting outmatched opponents over the last two weeks.

Post-fight talk swiftly moved onto the elusive matchup between Kazakhstani Golovkin and Alvarez—the sport of boxing’s greatest potential match-up and ensuing money-spinner. With Alvarez vacating his aforementioned WBC middleweight title to avoid facing his mandatory challenger in Golovkin, the fight has never seemed so distant.

That’s a worrying quote which completely opposes the apparent narrative of Canelo avoiding the match-up with Golovkin. There’s no doubting Canelo’s guts and attitude as a natural competitor and it’s always been deemed that his promotor, Oscar De La Hoya’s Golden Boy Promotions, has been the party playing hardball here. But, this all reeks of the promotional posturing between Mayweather and Pacquiao far too much for my liking.

HBO commentator Max Kellerman has similar reservations. “There is danger in having the kind of economic clout that Canelo does. We saw this in the Mayweather-Pacquaio era. Each fighter and each fighter’s promoter use the other as the carrot to keep fans interested. And so they are able to juice fans along the way in pay-per-view events that the fans weren’t particularly interested in but after all they want to see their hero fight — especially on the way to the big fight.

“You can see how much it bothers Canelo that he’s perceived as the guy who is ducking GGG here, and it’s not Canelo. Canelo fought Erislandy Lara, Austin Trout and others when it didn’t make great economic sense for him to do it, but he wanted to prove he was the best and he won close fights against them. That’s not the kind of move of a guy who ducks. But, as he said, he is loyal to his team, they have a business plan for him and he’s following his promoter’s plan.

“That must be an exquisite kind of torture for Canelo, to be framed as the ducker because he’s following the business plan of his promoter. I think it would be unfair to call it a duck, certainly if the fight happens by Cinco de Mayo (May 5). I think if it extends past that—which it looks like it will—it’s fair for fans to say ‘it’s already ripe, don’t let it rot’. And if it extends past that, past the end of next year, I think it’s fair to say Golden Boy wanted no part of GGG.”

Boxing fans had to wait six years for the Mayweather—Pacquiao fight to materialise and it would be a crime against the sport if the pair of Canelo and GGG don’t square off during the prime of their respective careers. It looks like both men want to prove their mettle in the ring against one another. But, on the surface, it would appear Golden Boy are more than happy to milk their cash cow against lesser opposition for the foreseeable future.

Tyrone Spong Continues His Winning Run as a Boxer